Emily Bibby excels in both vocal performance and psychology 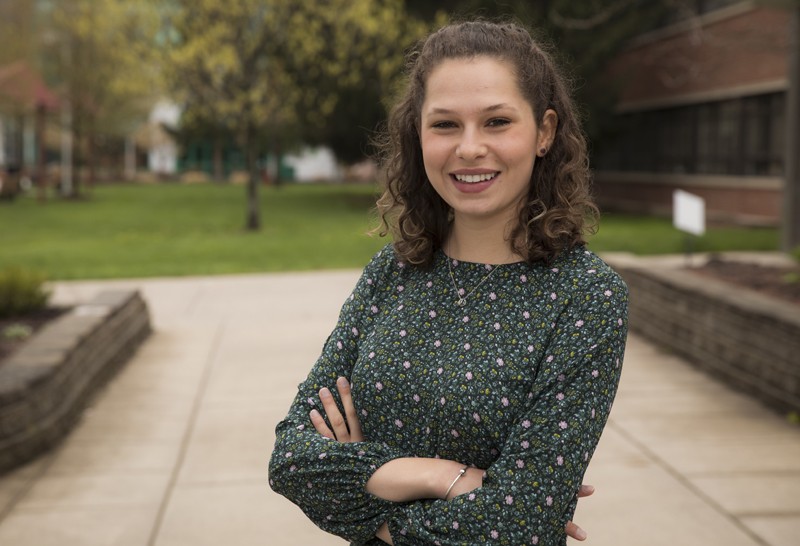 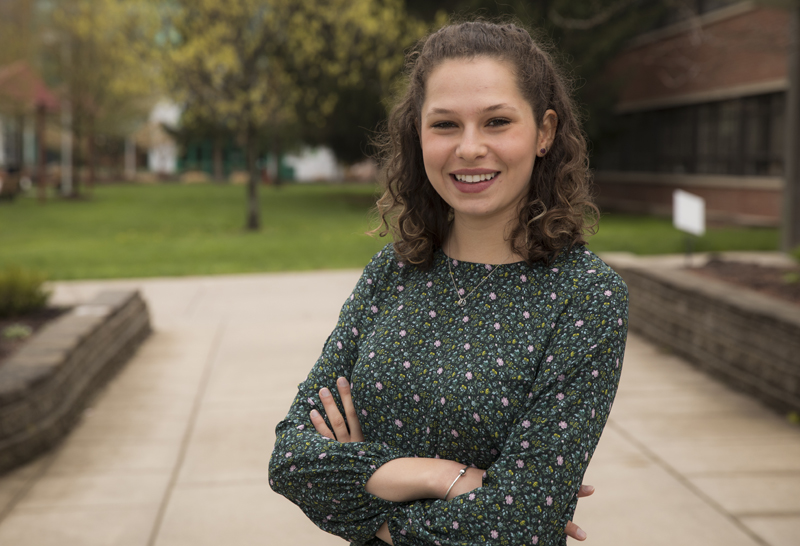 Delivering a research presentation is hardly intimidating to Emily Bibby. After all, the Binghamton University senior has performed in four Tri-Cities Opera productions.

“Music has helped me find my inner confidence,” said Bibby, who will graduate this month with degrees in vocal music performance and psychology. “It’s helped with things like giving presentations in class and defending my honors thesis. I’m comfortable doing public speaking because I’m used to being onstage.”

Studying psychology has also had a positive effect on Bibby’s singing.

“There’s a lot of thinking and preparation (in singing),” she said. “A simple thing like raising my soft palate is something I will consciously think about. It isn’t something I physically changed — it’s something I naturally, consciously thought that affected my sound overall.”

Bibby came to Binghamton University from the Fiorello H. LaGuardia High School of Music & Arts and the Performing Arts. She chose Binghamton because she knew the University had “the right balance” of strong psychology research and a small vocal performance program in which she would receive individualized attention.

At Binghamton, Bibby joined the Laboratory of Consciousness, Cognition and Psychopathology with Steven Lynn, distinguished professor of psychology, and the Marriage and Families Lab with psychology faculty members Richard Mattson and Matthew Johnson.

“Relationships were always something interesting to me,” Bibby said. “Being on a college campus with the hook-up culture and long-distance relationships fascinated me. Also, my parents have such a strong marriage. I was curious about what research could be done in the field.”

Working in both labs not only enabled Bibby to conduct research and learn from graduate students, but it also gave her two mentors in Lynn and Mattson.

“When I was interviewing for (the Marriage and Families Lab), Steve Lynn peeked his head in and said: ‘You should hire her. She is great!’” Bibby recalled with a laugh.

Bibby has spent her senior year as an intern for the University’s Psychological Clinic, where she gets to work at the main desk and interact with clients.

“It’s good to see how a clinic operates, have some contact with clients and see how therapy evolves,” she said. “Those are things I wouldn’t have been able to see in a classroom setting.”

In July, Bibby will be a part of a Binghamton University research group presenting at the International Association for Relationship Research (IARR) conference at the University of Sussex in the United Kingdom. The group will discuss “the misperception of sexual interest”— or how people differentiate friendliness from flirtation.

“A lot of research (on the subject) is from the past, so I thought about seeing how contemporary times have changed with movements such as Me Too and Times’s Up,” she said.

Music, meanwhile, is something that has been a part of Bibby’s life since she was a young girl performing in school productions and summer programs.

In the past three years, Bibby has performed in the chorus for four Tri-Cities Opera productions in downtown Binghamton: “La Traviata” (as a sophomore); “La bohéme” (as a junior); and “Madame Butterfly” and “H.M.S. Pinafore” (as a senior).

She recalled the intimidation of her first Tri-Cities performance.

“The level of professionalism is raised at Tri-Cities Opera,” said Bibby, who has also performed on campus with the Opera Ensemble and spent a summer studying opera in Urbania, Italy. “I had to remember all of my steps and all of the words! Performing in the Chamber Hall is nice, but performing at The Forum (in downtown Binghamton) is a different ballgame. The stage is beautiful, the costumes are great and there is only one performance. You have to give everything. It’s nerve-wracking, but fun.”

Bibby, who also serves as the High Hopes [now called SEEK] hotline’s vice president of applications/training and enjoys running and going to the gym, said time management is essential for pursuing a double major and extracurricular activities.

“I love the satisfaction of crossing something off (my planner)!” she said with a laugh. “I enjoy everything I do. I won’t take on something that I’m not going to enjoy. Everything I get involved with is something I feel passionate about.”

Bibby also believes that motivation and having caring mentors like Lynn and Mattson are keys to success.

“There are so many opportunities at Binghamton, but you have no idea some of them even exist,” she said. “People who have been here many years know they exist and who would be the right fit.”

Lynn said Bibby “ranks at the forefront” of undergraduate students he has mentored over the past 40 years.

“I feel privileged to have played a role in her training,” Lynn said. “From my first days of knowing her as the smiling, inquisitive student in my large psychotherapy class, to her stellar performance as a research assistant in my laboratory, to her being the first student I invited to serve as an undergraduate teaching assistant in my psychotherapy class, she has excelled in all respects.”

Mattson, an associate professor of psychology, called Bibby “a paragon of undergraduate student excellence” and more.

“She is interpersonally warm and sincere, affable and funny, and overall a real and genuine human being,” he said.

Bibby will head south two weeks after Commencement to begin a job at the University of North Carolina-Chapel Hall as a lab manager for Eva Telzer, an associate professor of psychology and neuroscience. Bibby plans to attend graduate school there and pursue a doctorate in clinical psychology.

“UNC will challenge me,” said Bibby, who hopes to do community opera outside of her new job. “It’s a social-development lab with a neuroscience approach. The position will give me insight on social aspects of psychology through a neuroscience lens. And why not move to warmer weather?”

As Bibby prepares to depart Binghamton University, she said she is fortunate for her accomplishments.

“In high school, I never considered myself as someone who could win the President’s Award or the Chancellor’s Award,” she said. “Binghamton has given me an extra level of confidence. It was able to recognize the amount of work I put in and how I tried to make the campus a better place. I’m thankful to have chosen Binghamton and glad that it noticed me.”