John Kuhn will be at Washington, D.C., research facility for nine months

John Kuhn, an assistant professor in the English Department, will serve as a 2019-20 fellow at the Folger Shakespeare Library. Image Credit: Jonathan Cohen. 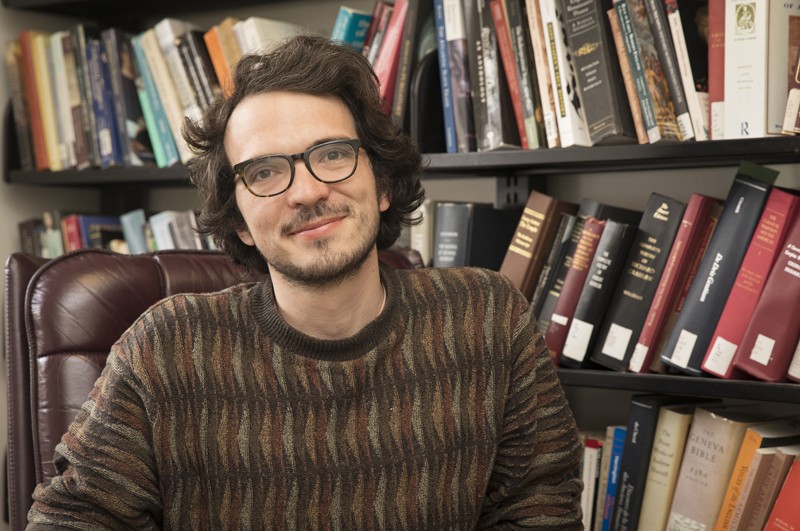 John Kuhn, an assistant professor in the English Department, will serve as a 2019-20 fellow at the Folger Shakespeare Library. Photography: Jonathan Cohen.
By Eric Coker

An English Department faculty member will spend the 2019-20 academic year conducting research at the Folger Shakespeare Library in Washington, D.C., after receiving a long-term fellowship from the institute.

John Kuhn, an assistant professor who specializes in 17th-century English literature and culture, is one of only five faculty members to be awarded the nine-month fellowship. Kuhn will join fellows from Cornell University, Barnard College, the University of Brasilia and Florida Atlantic University at the 87-year-old research library in August.

“I feel honored,” Kuhn said. “I do love teaching, but it’s wonderful to have unfettered research time. It’s great that this is supported by (the Folger) for scholars.”

Kuhn joined the Binghamton University faculty in fall 2017 after receiving his doctorate from Columbia University and spending a year as a visiting assistant professor at Wesleyan University in Connecticut. At Binghamton, he has taught classes ranging from early Shakespeare to Renaissance poetry.

The Folger Library not only features the world’s largest collection of Shakespeare-related material, but it also is the home to more than 250,000 books dating back to the mid-15th century.

Kuhn plans to work at the Folger Library on a book project called “Making Pagans: Stagecraft and Comparative Religion in Early Modern England.” His book examines the 17th-century connection between theatrical “pagan” rituals and a growing interest in comparative religion among Christianity, Judaism, Islam and Paganism.

“It’s a catch-all category intended to include everything from the religions of the ancient Romans to the contemporary Amer-Indian religions that explorers were encountering around the world,” Kuhn said of Paganism.

While some 17th-century scholars and theologians were studying potential links between Paganism and other religions, pop culture was also tackling the issue, Kuhn said.

“The stage, in particular, had a popular reach akin to television today,” he said. “Some of the biggest budget spectacles of the 17th-century stage were representations of the Pagan religion.”

Some shows would even go to extremes such as displaying oracular altars, Pagan chiefs waving wands and dragons entering the stage.

“There was a lot of money and stagecraft expended on the spectacles of the Pagan religion for English audiences,” Kuhn said. “The concept seems funny — these are ridiculous special effects in plays — but it has applications in the colonial world that have real consequences in the way people are thought about and treated.

For example, slavery is justified and the Europeans’ killing of indigenous people is ignored because Christians are considered to be in “a permanent state of war” with Pagans, Kuhn said.

Kuhn hopes to use the Folger Library’s archives — including comparative-religion texts — to finish his book by the end of the fellowship.

“The Folger has unique copies of 17th-century plays with extra stage-direction annotation in them,” he said. “They are called ‘prompt books’ and can show us more about how these stage spectacles were put together.”

As a Folger fellow, Kuhn will give talks, attend seminars and listen to presentations from visiting experts. Kuhn, who took a seminar at the library as a graduate student, said he is excited to return to the research center.

“The Folger serves as a hub for people who work on 16th- and 17th-century (English studies),” he said. “There are a lot of scholars coming in and out of the building. It’s an intellectually stimulating space.”

Kuhn, who is also working on projects such as the history of the hammock and 17th-century dramas’ use of “death by broken heart,” said he is thankful that the fellowship is giving him the needed time to write.

“It means a great deal to me as a junior faculty to have some of the physical constraints of writing lifted,” he said. “I feel lucky that the Folger is trusting that I’ll use this time. I hope the book can be a major piece of scholarship.”