Doctoral candidates and their faculty advisors during the 2019 Doctoral Hooding Ceremony, held Wednesday, May 15, at the Osterhout Concert Theater in the Anderson Center for the Performing Arts. Image Credit: Jonathan Cohen. 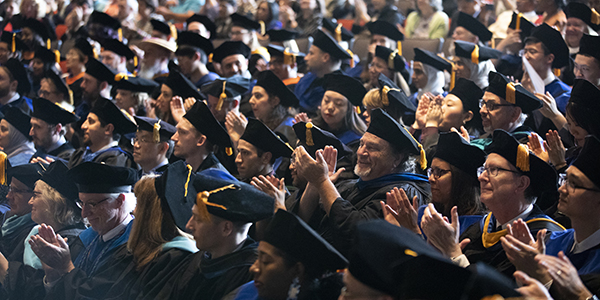 Doctoral candidates and their faculty advisors during the 2019 Doctoral Hooding Ceremony, held Wednesday, May 15, at the Osterhout Concert Theater in the Anderson Center for the Performing Arts. Photography: Jonathan Cohen.
By Katie Ellis, Eric Coker, Natalie Blando-George, Allen Wengert

Binghamton University kicked off its nine Commencement ceremonies with the flourish of a doctoral hooding ceremony Wednesday, May 15 — the first time in several years that the doctoral hooding was not combined with the master’s candidates’ ceremony.

More than 120 PhD, DNP and EdD candidates heard from President Harvey Stenger, Provost and Executive Vice President Donald Nieman, and Graduate School Dean Aondover Tarhule before being hooded by their advisors at the ceremony, held in the Anderson Center’s Osterhout Concert Theater.

Stenger told the doctoral candidates that he saw a “palpable sense of pride and achievement” in their faces, and the face of their friends, family and faculty mentors. He recalled feeling as if he had climbed a mountain when he was hooded and told the candidates their hood “will do more than keep the Binghamton rain off your hair — it will give you almost magical powers.”

Your hoods “will open doors at the world’s leading colleges and universities, provide entry to the top research laboratories and scholarly libraries, and allow you to pass into the highest corridors of government and industry,” he said. “But most important, they show that you have learned to discover secrets and hidden truths about the world around us and the people who live in it. And with these you will make the world a better place.”

“You have succeeded in what few are willing to attempt and what many who start the journey are unable to complete,” Nieman said, as he highlighted the tenaciousness, thirst for discovery and keen intellect of the graduates. “All of us feel privileged to share this day with you, to help you savor an accomplishment that has been many years in the making and that has prepared you to make unique contributions to our future.”

Commencement symbolizes the confidence that your teachers, academic department and the University have in what you have learned and in what you have become during your time here, Tarhule told graduates.

“You are not yet at the top of the mountain, but you now have all of the equipment and gear and preparation needed to get you there,” he said. “Hang on to the same attributes that got you here, and they will take you to any heights and any ambitions you aspire to, just as previous generations of Binghamton graduates before you have done.

“We are confident that you, too, will go on to have eminent and illustrious careers and set even higher expectations for the next generations,” he said.

Mary Beth Curtin ‘82, MAT ‘86, MA ‘87, assistant vice president for strategic research initiatives and member of the Alumni Association Board of Directors, welcomed the doctoral graduates as the newest members of the Binghamton University Alumni Association. “You represent much of what is great about Binghamton University and your achievements will reflect positively on Binghamton,” she said, before asking the graduates to take four steps: display your diploma with pride, be informed and follow us on social media, remain involved and make new Binghamton connections moving forward.

Stenger, Nieman and Tarhule also praised the more than 750 master’s candidates who crossed the stage during the Graduate School Commencement, held at 4 p.m. Friday, May 17, in the Events Center on campus.

“The recipient of the master’s degree is recognized as having obtained the knowledge and skills to teach others, possessing both theoretical and applied knowledge, and capable of critical reasoning and problem solving,” said Stenger. “This degree is, in my opinion, a mark of an individual prepared to add to the quality of life we lead as global citizens.

“To reach this point today, you have shown that you possess an intellectual rigor that enables you to see the world through the lens of your discipline,” he added.

But the achievement did not likely come without sacrifice, Stenger said. “I know that one of the biggest obstacles to obtaining an advanced degree is the personal sacrifice that it entails, and the burden it puts on those around you. Now, it’s your time. You have completed the long trek to your degree and are now ready to embark on new adventures!”

As there was for the doctoral ceremony, a representative from the Alumni Association welcomed graduates at the remaining ceremonies to the ranks of alumni. Lisa Abbott, MBA ‘93, president of the Alumni Association Board of Directors, told graduates at the ceremonies for master’s and bachelor’s students, “This is your time to shine, to celebrate and to reflect on what the last four years of toil, laughter and relationships have brought to your life and to your future.”

The Alumni Association will be there to support you, Abbott said, as she asked the graduates to remain connected to the University.

“Life isn’t about finding yourself. Life is about creating yourself,” she concluded. “Imagine all you can do as graduates! Go forth, change the world, create the next version of yourself, a proud alum of Binghamton University.”

Stenger told bachelor’s candidates at the ceremonies held on Saturday and Sunday, May 18 and 19, that they were at the culmination of a long and challenging journey filled with the excitement of exploration and discovery, the guidance of faculty mentors and the friendship of colleagues and peers.

“As I look around at the sea of faces before me — smiling, excited, eager and ambitious — these are the faces of the future, shaped by the experiences and values we encourage at Binghamton,” he said.

And he spoke of finding a passion.

“The pursuit of passion is, in many ways a hunt, where there are clues and tracks to follow, where patience in the field is rewarded, and the trophy can be elusive,” Stenger said. “There must be investment — of time, of intelligence, of questioning and seeking answers, in order to foster a passion. So, I hope that Binghamton has given you the tools to find your passion.

“Continue your journey of personal growth and education so that you, too, can continually renew and rediscover your passion,” he said. “I look forward to learning of your many future successes and hope that you will remain steadfast members of the Binghamton University community.”

Additional coverage of Binghamton University’s undergraduate ceremonies can be found at the following links:

Harpur College of Arts and Sciences

College of Community and Public Affairs

All ceremonies were live-streamed and the videos are available on the Binghamton University YouTube channel.