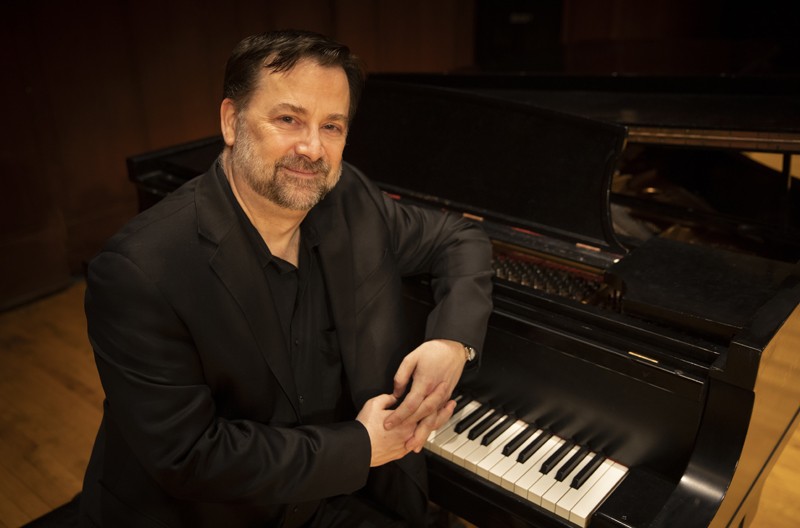 During a musical performance, a choral conductor’s job is to cue performers, set tempo and shape the sounds of individual singers to create a melodic whole. For William Culverhouse, this job doesn’t end at the final bow.

“There are those moments that happen when you’re conducting, where you get goosebumps and you feel you’re at one with the entire audience, everybody in the choir and the whole world” said Culverhouse, director of choral activities and assistant professor of music at Binghamton University. “But it’s not you making the music happen. It’s you steering while the music just sort of blossoms.”

While those moments don’t happen all the time, they’re what conductors live for, Culverhouse said, and they’re also the founding principle of his teaching philosophy.

As director of student choral activities, Culverhouse runs the Harpur Chorale, a large, mixed ensemble; the Treble Chorus, a midsize soprano-alto ensemble; and the Chamber Singers, a small ensemble of highly skilled singers.

Students of all majors and class years can audition and participate in the choral groups for academic credit. For Culverhouse, that accessibility is important.

“If you want to study integrative neuroscience but still sing in a choir, Binghamton is the place for you,” he said. “My hope is that there’s something in it for everybody.”

Since joining the department in fall 2017, Culverhouse has nearly doubled enrollment in the choral music program. Some of his initiatives have included expanding the musical repertoire to include more international and nontraditional music and working to nurture the relationship between the University’s program and the student-run a capella community.

“I try to make the choral music program relevant and interesting and enjoyable, but also be a place where some of the satisfaction comes from having worked really hard and having produced something good,” he said.

Culverhouse came to the University after nine years as director of choral activities at Earlham College in Richmond, Ind. He received his bachelor’s degree focused in music education at the Oberlin Conservatory of Music in Ohio.

Initially, he was interested in composition and simultaneously pursuing liberal arts studies, but then something else clicked.

“I got bitten by the bug,” Culverhouse said. “[At Oberlin,] I shadowed a student who was a couple of years older than I was when she was doing her student teaching, and I just kind of fell in love with it.”

After teaching music at public schools for seven years, he went on to receive his master’s degree and doctorate of musical arts in choral conducting from the University of Maryland. Since then, he has both sung and taught workshops across the country. In 2016, he received a Fulbright grant to conduct a program in Jordan. He also specializes in choral music of the Arab world.

A collaborator by nature, when Culverhouse first arrived at Binghamton University, he jumped at the chance to not only support the on-campus choral community but to strengthen its relationship with the choral communities of the surrounding areas.

Culverhouse engages the local music community even further as director of the Southern Tier Singers’ Collective, a professional-level community choir he founded in fall 2018. Many of the singers are music educators themselves.

The Collective rehearses and performs on a concentrated schedule to accommodate the busy professional lives of its members, such as that of Harpur College Dean Elizabeth Chilton, one of the group’s founding members.

As a director, Culverhouse puts the future of the program in the hands of the students.

“Instead of having officers, we have a steering committee where everybody’s equal and people take on specific roles as needed,” he said. “It’s less top down and more flat management. And then I steer when I need to.”

As a conductor, Culverhouse supports students by meeting them in the middle.

“What I’m looking for is: What are these students bringing to the situation? What do they want, and what do they not know that they want but they might enjoy, and how does that intersect with what I have to offer, what I’m good at, or what I can learn how to be good at?” he said. “Every situation is a different combination of what I have to offer and what they bring to the table.”

For Binghamton University students, Culverhouse said, this is particularly beneficial, because of their willingness to grow and get involved.

“Binghamton students are good at striking the balance between being willing to ask deep, unanswerable questions but also being practical enough to get stuff done,” he said. “Thinking through things like student motivation and repertoire relevance and philosophy and that kind of thing, and then also, you know, somebody has to go pick up the donuts for the extra rehearsal on Friday. That’s been very healthy for the growth of the program.”

Shimona Lahiri, a junior psychology major and teaching assistant for the Treble Chorus, said Culverhouse proves time and time again his dedication to the students in the choral program.

“I’ve learned things about music that I never knew, and I’ve been a music student ever since I was in third grade,” she said. “And he knows everybody’s name. Every single person’s name in Harpur, Treble, and Chamber. That’s a lot of students. He knew my name from day one. I don’t know how he does it.”

Recently, the Harpur Chorale performed live versions of music from popular video games with the Binghamton Philharmonic. Culverhouse hopes more projects like this are in the future of the choral music program.

“Now that we’ve had a taste of what can happen outside the ‘one major concert a semester’ model and the sort of standard mix of songs, people are starting to think,” Culverhouse said. “I’m hoping that the program continues to grow over the next three years, and I think after that we’ll probably reach a leveling-off point and be able to look at what we have, take stock, and say ‘OK, where do we see the program going and what kind of projects do we want to take on?’”

However, like any good conductor would, Culverhouse gives the material and lets his singers shape the result.

“What I’m trying to do is get the students thinking about those questions now so that when the time comes we can pivot and move,” Culverhouse said. “It kind of all leads back to those oceanic moments, but there are an infinite number of pathways to those moments. I’m trying to find the pathway that will get people there the most efficiently and most effectively from where they are when we first meet.”