Every Vestal fourth-grader invited to tour this spring 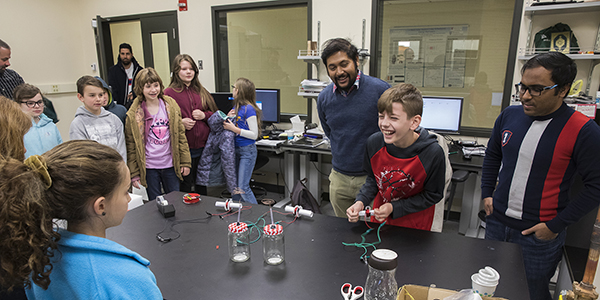 Every fourth-grader in the Vestal Central School District was invited to Binghamton University this spring. Nearly 250 children from five schools visited laboratories on the main campus and at the Innovative Technologies Complex.

The tours featured hands-on experiments in physics and biology as well as a look at the anechoic chamber, the E.W. Heier Teaching and Research Greenhouses and artifacts collected by the Public Archaeology Facility. Campus hosts also included researchers in chemistry, neuroscience, biomedical engineering, mechanical engineering, computer science, geology and the Analytical and Diagnostics Laboratory.

Mary Kunzman, a teacher at Tioga Hills Elementary, said her students learned about topics such as electricity, pollen, cells, and liquid nitrogen during their trip. “Who knew that you can actually see a group of heart cells beating on their own, or that cheese puffs freeze almost instantly when placed in liquid nitrogen?” she said. “You can also eat said cheese puffs! Our students learned all this and more while visiting the University, and we now have many future scientists in the making thanks to the dedicated students, scientists and staff at Binghamton University.”

Kathryn Przybysz, a doctoral student in psychology, organized a group of graduate students who planned lessons about brain science for some of the visiting fourth-graders.

“One of the goals of our outreach group is to introduce kids early on to what science — particularly neuroscience — actually looks like and get them excited about that,” she said. “This event really reinforced my belief that most children have an inherent interest in science and in learning how things work.”

She said she found the interactions with the 9- and 10-year-olds enlightening. “As a neuroscience graduate student who works with the brain every day, it is easy to lose sight of how amazing the brain actually is,” Przybysz said. “Having this opportunity to teach these kids even just the basics of how different parts of the brain function and seeing their excitement was a great reminder of how fortunate I and the others in the group are to play our small roles in uncovering how the brain works.”

Rachel Coker, director of research advancement, has coordinated visits by school groups for several years. She said she enjoys seeing the children make connections to the campus that’s in their backyard.

“Some of these kids have never visited the University before,” she said. “Others may never have seen a scientist in real life. During these tours, they get to meet scientists who don’t necessarily fit the stereotypical image. They’re not all in lab coats, and they include women and people of color. I want them to be able to picture themselves as researchers someday.”

Gretchen Blachowiak, who teaches fourth grade at Glenwood Elementary School, brought her students to campus for the first time this year. “It allowed the students to expand their knowledge of content learned in class,” she said. “The visit helped them see that science can expand beyond the classroom and into a career.”