Seventeen Binghamton University students have received Fulbright grants over the past three years. The 2019-20 recipients will conduct research and teach in Spain, Colombia and Belarus. 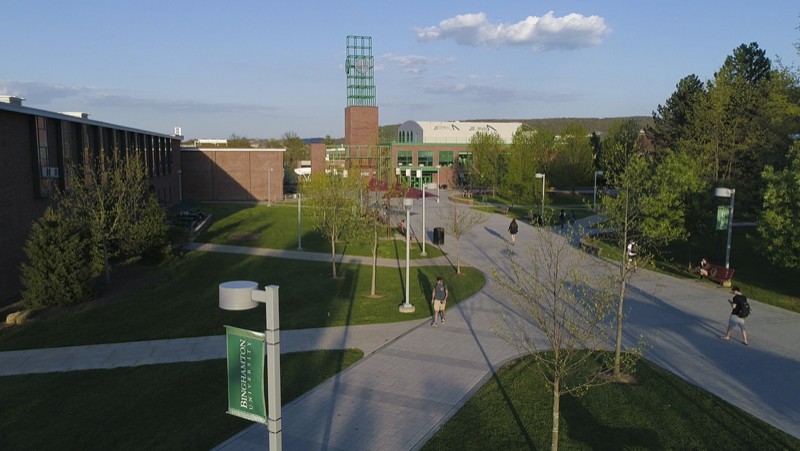 Seventeen Binghamton University students have received Fulbright grants over the past three years. The 2019-20 recipients will conduct research and teach in Spain, Colombia and Belarus.
By Eric Coker

Alex Velez, MA ’17, can be forgiven if he seemed a little distracted while presenting research at a conference in Cleveland: The doctoral student had just received an email saying he is a 2019-20 Fulbright scholar.

“I was in the middle of presenting a poster when I got the news,” he said of the experience at the American Association of Physical Anthropologists conference. “It was a challenge to keep myself contained long enough to explain my poster. I’m sure I still came off as strangely excited or intense and weirded out a couple of people. After I got to my hotel room that night, I was on the phone for hours sharing the news with friends and family.”

Velez, who is pursuing his doctorate in anthropology, is one of three Binghamton University students to receive 2019-20 grants from the Fulbright U.S. Student Program. Joining Velez from Harpur College are Maria Dubin, who graduated in May with a degree in Russian studies and philosophy; and Michael Stephens, a doctoral student in sociology.

The Fulbright program provides grants for graduate students to conduct individually designed study/research projects or for students to hold English teaching assistantships. During their stays, Fulbright recipients meet, work, live with and learn from the people of the host country. About 1,900 U.S. students receive Fulbright grants each year.

Valerie Imbruce, director of the Office of External Scholarships, Fellowships and Awards that assists students through the Fulbright application process, said it is an honor for Binghamton University to have its scholars participate in the program.

“Binghamton University students do extraordinarily well in the two phases of the Fulbright selection process,” she said. “This last round, two-thirds of our student applicants were selected by the National Screening Committee as semifinalists and half were selected by the host country as a finalist or an alternate. The Fulbright U.S. Student Program has been dedicated to the critical values of cross-cultural exchange and grassroots, international relations since 1946 — values that our students demonstrate.”

For Velez, who will be scanning and virtually landmarking fossils associated with the Sima de los Huesos (Pit of Bones) in the Atapuerca Mountains of northern Spain, the encouragement of international cooperation and understanding is important.

“The role of any Fulbright grantee is to be a cultural ambassador for the United States to their host country,” he said. “This involves not only talking about cultural exchange and its benefits, but being the one to initiate the exchange.”

When he is not gathering research data during his nine-month stay in Spain, Velez plans to attend cultural and academic events, and meet with students and professionals from various fields.

“I’m looking forward to learning about Spain’s past while I’m there,” the New York City native said. “Spain is rich in history; you could walk the length of an entire New York City block and not find a single building that was built in the last century. Every city [in Spain] seems to have had some pivotal role in Spanish history.”

Stephens, a Virginia native who received his master’s degree in public and international affairs from Virginia Tech University, will use his Fulbright award to study workers in the LGBT tourist sector of Cartagena, Colombia. The research will be used for his dissertation project on the topic.

“This work will help contribute to scholarly discussions on sexualities in the Caribbean, as well as the changing nature of labor under neoliberal promotion of tourism in the global South,” he said.

Stephens added that he also hopes his time in Colombia enables him to better understand the social, political and economic aspects of the nation on a local and global scale.

“It is truly an honor to join this larger community of Fulbright scholars,” he said. “As a first-generation university student from a working-class background, this opportunity is a crucial step and achievement in realizing a significant academic and professional goal.”

Dubin will spend an academic year in Belarus serving as an English teaching assistant. Dubin, who completed a study-abroad trip to St. Petersburg, Russia, as a Binghamton University undergraduate, will work with a university-level instructor and host meetings that will give students an opportunity to learn about English language and American life.

“I am looking forward to being exposed to an entirely different way of life, and to learn from the perspectives and knowledge of the people in Belarus,” she said. “Ultimately, the exchange of knowledge and perspective on a variety of subjects, and the discovery of such fundamental, human similarities, will be a very rewarding experience.”

Dubin, who hopes to teach philosophy, said she was impressed and humbled to receive the Fulbright honor.

“It implies great responsibility, which I am eager to accept,” she said. “It will strengthen my teaching skills, experience and understanding. I am also grateful for the personal growth that this position entails, and for the chance to form friendships.”