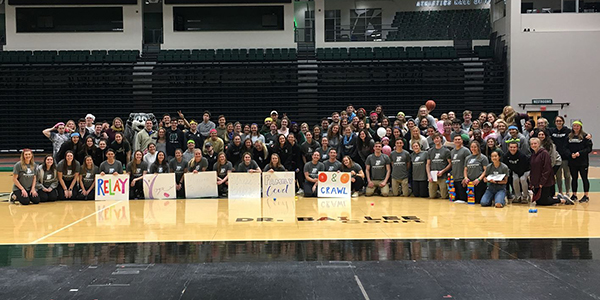 There was competition in the Events Center involving many Binghamton student-athletes on Wednesday, April 10. But it was not a typical sporting event.

Instead of an intercollegiate basketball game, wrestling match or indoor track meet, there was a scavenger hunt, a game of Family Feud and relay races. It was all part of an initiative known as the Better Together Games and athletes from each of Binghamton’s athletic programs were present.

Binghamton held its 72nd Annual Varsity Athletics Awards Banquet on Monday, April 29, at the Events Center. The department honored its 400+ student-athletes and celebrated the achievements of the 2018-19 year.

During the evening, the University recognized its 83 seniors and two of them — softball player Makenzie Goluba and lacrosse player Joe Licata — offered reflections on their time at Binghamton.

University president Harvey Stenger opened the program with praise for the student-athletes.

“We are here to honor your great achievements on the fields and courts,” Stenger said. “But I want to focus on a different aspect ... your leadership, community service and academic success. You are a source of pride for many people. When you factor in your leadership, service and the alumni pride you create ... everybody wins. Your impact will last forever.”

Four individuals, one team selected to Athletics Hall of Fame

The Binghamton Athletics Hall of Fame Class of 2019 has been selected and the group features four individuals plus one of the most accomplished teams in school history.

Set to be enshrined on Dec. 7 are tennis player Anna Edelman ‘11, basketball player Larry Gainen ‘68, track and field athlete Hasani Hampden ‘06 and volleyball player Michelle McDonough ‘11, along with the 1999-00 women’s basketball team. They were voted in by a 15-member committee of coaches, staff, alumni, current HOF members and members of the media.

In the 23 years since its inception, the Hall of Fame has seen 111 inductees spanning 19 sports.

The Binghamton Bearcats Athletic Association (BBAA) hosted its 30th annual Matthews Auto Bearcats Golf Classic at the Links at Hiawatha Landing on Thursday, June 13. The goal of the event was to raise money for the Athletic Department’s General Scholarship Fund and 220 golfers took part in the event. The $55,000 raised was the largest single-year total in the history of the tournament.