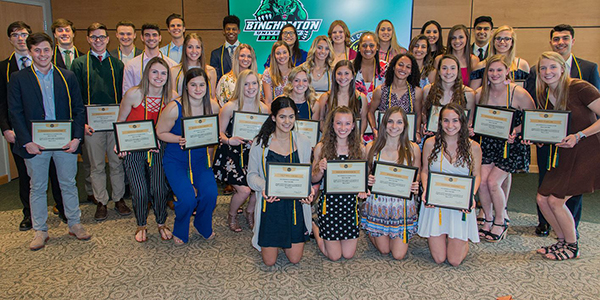 The Binghamton Athletic Department inducted 44 student-athletes into the National College Athlete Honor Society (Chi Alpha Sigma) on Monday evening in the TAU Club Room of the Events Center. This marks the 14th consecutive year that the athletic department has held such inductions. The 44 inductees represents the second-largest class to date.

In order to be eligible for induction into Chi Alpha Sigma, a student-athlete must have achieved junior academic standing by their fifth semester, have attained at least a 3.4 cumulative grade point average and have participated in a sport sponsored by the NCAA.

Since its inception, 446 Binghamton student-athletes have been inducted into Chi Alpha Sigma. The largest class of inductees, was 46 last year.

The America East Conference has released its list of Presidential Scholar-Athletes for the 2018-19 academic year and 10 Binghamton student-athletes are included among the selections.

Since the America East Presidential Scholar-Athlete Award was established in 2014, Binghamton has posted 37 selections.

Student-athletes set another record with 3.29 grade-point average in spring

For the fifth consecutive semester, Binghamton student-athletes raised the bar on their academics and for the third straight term, the group’s grade-point average is a new record. In the spring semester, BU student-athletes achieved a 3.29 GPA - the department’s highest in at least 21 years - and a figure well above that of the general student population at the University.

The record-setting GPA also marks the 14th consecutive semester that the group surpassed the 3.10 mark.

“This is another tremendous accomplishment by our student-athletes,” Director of Athletics Patrick Elliott, PhD said. “To set an all-time high for the third-straight semester shows an incredible level of achievement at this world-class institution.”

The 197 total selections from Binghamton was the highest total among the nine America East Institutions. Binghamton also recorded the second-highest percentage, trailing only New Hampshire, with 79 percent.

Simply put, the month of May has brought a slew of awards for junior Jack Fitzgerald on both the athletic and academic fronts.

On Monday, May 27, Fitzgerald was named to the College Sports Information Directors of America (COSIDA)/Google Cloud Academic Track & Cross Country All-District Team. He earned the honor by virtue of his outstanding accomplishments both in the high jump and in the classroom.

Four members of the Binghamton wrestling team have been recognized by the EIWA for their academic achievements during the 2018-19 season. Redshirt freshmen Matt Swanson and Joe Doyle, redshirt sophomore Audey Ashkar, and junior Anthony Sparacio were all named to the 2019 EIWA Academic Achievement award list.

“I’m very proud of our four student-athletes that made the EIWA All-Academic team,” head coach Kyle Borshoff said. “We constantly stress the value of working hard in the classroom, as well as on the mat. I hope to continue seeing more and more of our wrestler’s honored as elite students.”