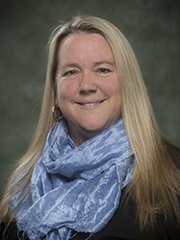 Her areas of interest in research are Dante, early Italian lyric poetry, medieval French love literature and the history of science. She is active in the Center for Medieval and Renaissance Studies (CEMERS) and is on the advisory board for Mediaevalia.

Stewart, who received the Chancellor’s Award for Excellence in Faculty Service in 2013, said her first focus as the newest collegiate professor was to prepare for new student orientations, but she has a number of ideas brewing for the residents of Mountainview.

Calling her experience several years ago as a faculty-in-residence at Mountainview “eye-opening,” Stewart jumped at the chance to apply for the collegiate professor position.

“Fast forward to this last academic year, when I myself sent my oldest son off to his first year in college,” she said. “It gave me a whole new perspective on what an exciting but also challenging time college can be for students, and helped me better understand that no matter how fundamental academics are, college really is about a great deal more than what students are doing in my particular class. When the call for this position came out, I was immediately intrigued, and felt that the timing was right for me to pursue it.”

Stewart sees Binghamton students as bright, caring and interesting, so looks forward to interacting with more of them — and more often. “I look forward to helping acclimate the freshmen to University academic life, giving them guidance and helping to set them up for success as they transition from high school to a whole new educational experience. I also look forward to setting up various types of programming to enhance their lives at the University.”

Stewart has two passions: Italian (language, literature and culture) and music (she’s actually in a rock/blues band with her husband). She’s especially looking forward to building some programming around these passions.

For example, students in Mountainview currently host a weekly open mic on Thursday nights, Stewart said, and she’s excited to get to know the students who participate in it and see what other kinds of musical activities they might pursue together. Possibilities include a student music and arts festival, and perhaps some music jams, which differ from open mics in that there’s a full band set up and people who may have never played together before rotate in and out, improvising and jamming together.

“I’m also looking forward to building more bridges between Romance languages and Mountainview,” Stewart said. “Romance languages is a department that is very engaged with students, holding activities such as movie nights, conversation hours, cooking nights and more on a regular basis. My plan is to move some of the more popular activities (specifically those focused more on culture than language, and as such are appropriate for students who may not have the language skills) up to Mountainview. It’s one of the few places on campus that has break housing and so is home to many international students. I look forward to building on the international character/aspects of Mountainview.”

Stewart’s vision for the Rock and Roll Learning Community is to have students who play all kinds of instruments as well as students who are interested in the technical aspects of music such as sound, lights and recording live together on the same floor and pursue musical endeavors together such as clinics with special guest musicians (either via Skype or when the musicians are in town for a show). She would develop a 2-credit jamming class where she and students would explore together both the history of jamming, current jam bands and jamming techniques.

“I would also love to have the students collaborate with the Binghamton University Libraries’ new Center for the Study of the 1960s, looking at the role(s) of music in key points of modern history, and perhaps taking them on a field trip to the Woodstock Museum at Bethel Woods,” Stewart added. “I have been running jams out in the Greater Binghamton community for a number of years now, and have seen time and again how music brings people together; a learning community dedicated to live music could unite students from a wide variety of majors and backgrounds. Plus, study after study in recent years has shown how effective live music is for stress-reduction, for both players and listeners, and we all know how helpful that could be for college students!”

For the Romance Languages Learning Community, Stewart would have students who speak French, Spanish and/or Italian living on one floor, speaking as much of the target languages as possible, participating in many of her departments sponsored activities (some of which would be designed specifically for them, and held in their building), taking a course that would feature lectures by various faculty in her department and possibly even pursuing a study-abroad experience together. “Many universities around the country have “language houses” where students can be immersed in other languages and cultures, and I’d really love to make that happen at Binghamton,” she said. “And for a language like Spanish where we have many students who are heritage or native speakers, it would give the non-native speakers a wonderful opportunity to learn from the native/heritage speakers, and it would give the native/heritage speakers a space where they would feel not only comfortable speaking their native language but very highly valued for it. It seems like a win-win for everyone.”

And thinking in more global terms, Stewart loves the idea of opening up many of the activities she plans to all students, regardless of where they live.