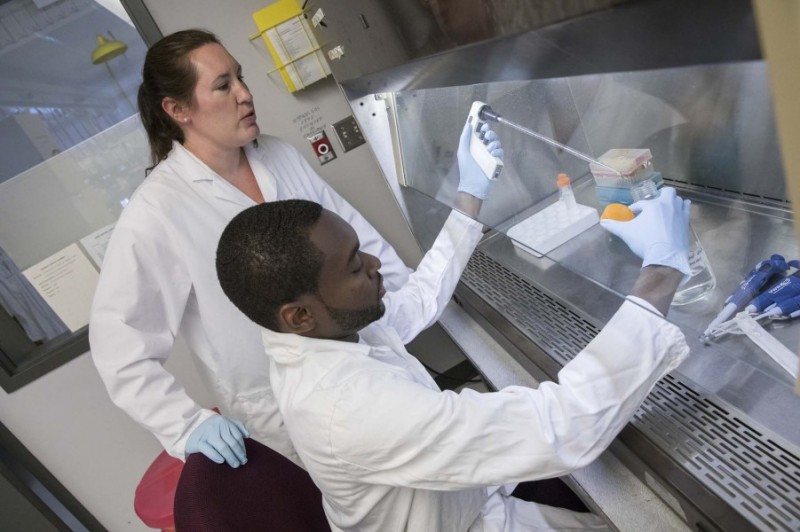 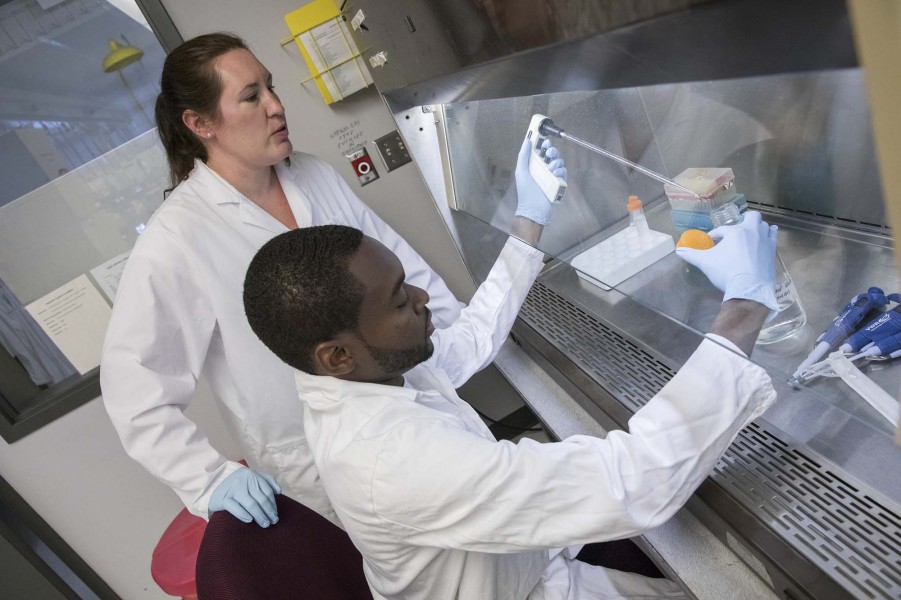 Gretchen Mahler, associate professor of biomedical engineering, works at left with a student at a Binghamton University biomedical lab. The Thomas J. Watson School of Engineering and Applied Science professor will lead an effort to find the causes of calcific aortic valve disease. Image Credit: Jonathan Cohen.
By Chris Kocher

Other illnesses may get more attention from the general public, but the numbers don’t lie: According to the Centers for Disease Control and Prevention, about 610,000 people die of heart disease in the United States every year. That’s one in every four deaths.

One of the more insidious — and puzzling — forms of the potentially deadly condition is calcific aortic valve disease, which causes hardening and lesions on the valve that can hurt the effectiveness of blood circulation through the body.

An interdisciplinary team from Binghamton University is utilizing a blend of microtechnology and mathematical models as early steps to finding a cure.

Mahler — the study’s principal investigator — is a “tissue engineer” who utilizes tools from the semiconductor industry, ones that are generally used to make computer chips. Instead of running current through them, though, her experiments use human cells and a blood surrogate to build microphysiological systems that act like a simplified version of our own bodies.

“You can shrink down human organs or tissues,” she said, “and you can mimic, on a really small scale, the flow pattern that you see in the circulation system and the amount of time it stays in contact with those tissues.”

The new NSF grant builds on previous studies that the team has done in the past seven years, one that got funding through the University and another from the NSF. They meet every other week as a group, collaborate on proposals and papers, and advise students.

“These types of projects are very important, because no one can be great at all things,” said Mahler, who has been at Binghamton since 2011. “You need to have people with different expertise to solve problems that are really hard. Things that happen with our human bodies are a complex system.”

Each professor approaches a problem from a different angle, and together they hope not only to create experiments but also to analyze the complex data needed to build effective mathematical models.

“We’re hoping the data can make really powerful predictions,” Mahler said. “You can take your cell-culture model to investigate parameters that you can put into your computer model, and then you can use your computer model to do simulations and try to direct your experiments toward really interesting conditions.

“It’s an iterative process, where you do experiments and you do computational models, then you use each one to inform the other. It’s very collaborative.”

As part of the three-year NSF study of calcific aortic valve disease, Mahler and her team will look for the causes of the condition that affects a growing segment of the aging U.S. population.

While doctors can measure the degeneration of the valves, no drug has proven effective against it. The only solution is open-heart surgery to replace the valves, and that’s an expensive problem for the healthcare system.

“The valve is a mechanically dynamic environment. You have this tiny flap.. It’s so thin,” Mahler said.

“We work with pig valves, and when you handle them, there’s just this little scrap of tissue. When it opens and closes, it withstands these pressure and shear forces really well over long periods of time.”

The experiments will focus on myofibroblasts, which are cells found throughout the body but only appear in the heart following cardiac injury. They have the potential to heal or to cause disease — but what makes them go one way and not the other?

The Binghamton researchers will try different conditions, such as the presence of certain proteins, to determine what leads myofibroblasts down the path to disease.

Multiscale computational models that range from the molecular to the tissue level can help experiments go faster by probing different pathways and better predicting what would be effective targets for further therapeutic study.

“We use some of the tools we’ve developed with microfluidics and culturing these cells to create 3D environments where they can grow and recreate some of the conditions you’d see in a heart valve in the human body,” Mahler said.

The same myofibroblasts that help or hurt heart cells also are present around cancerous tumor cells. While it’s a long road to finding a cure for calcific aortic valve disease or cancer, the Binghamton team is among those on the journey.

“We’re trying to build these tools that will give insight into the major problems in human health,” Mahler said.