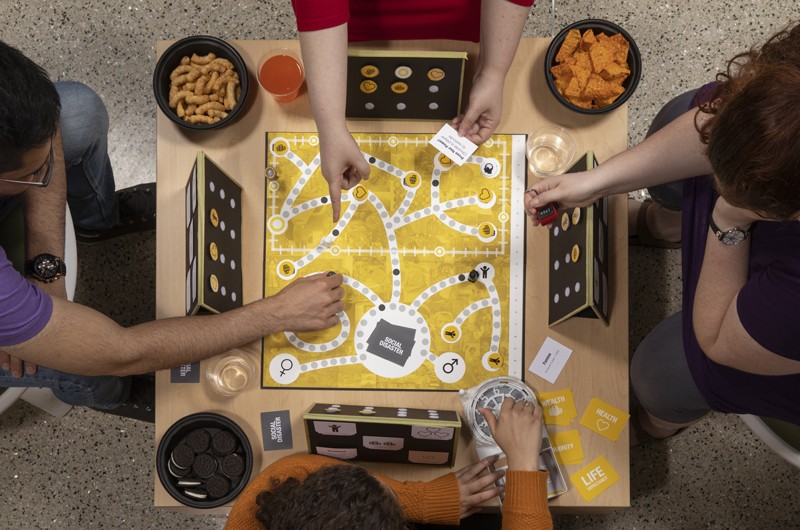 In spring 2019, the associate professor offered students in his History of Anthropological Thought (ANTH501) class an opportunity to design a board game as an alternative to a written final exam. Two groups of students accepted Reno’s challenge and created games that teach anthropological theories. The project has culminated with a poster in the Anthropology Department that explains the games, including details such as playing time, the number of players, recommended age ratings and the theories involved.

“I like students to create something that will last,” Reno said, “as opposed to memorizing a concept and its definition, spitting it out on a test and never remembering it again.”

Reno’s students were thrilled with the decision to combine anthropological knowledge with gaming.

“I haven’t been able to unleash creativity into a learning assignment like this in college,” said Robin Baumeister, a graduate student from Cortland, N.Y. “This project made me excited about learning and excited to share our knowledge with the students who played our game.”

In the game SNID, players take on the roles of anthropological and social theorists, such as Karl Marx, Franz Boas and Claude Levi-Strauss, and must attract followers. 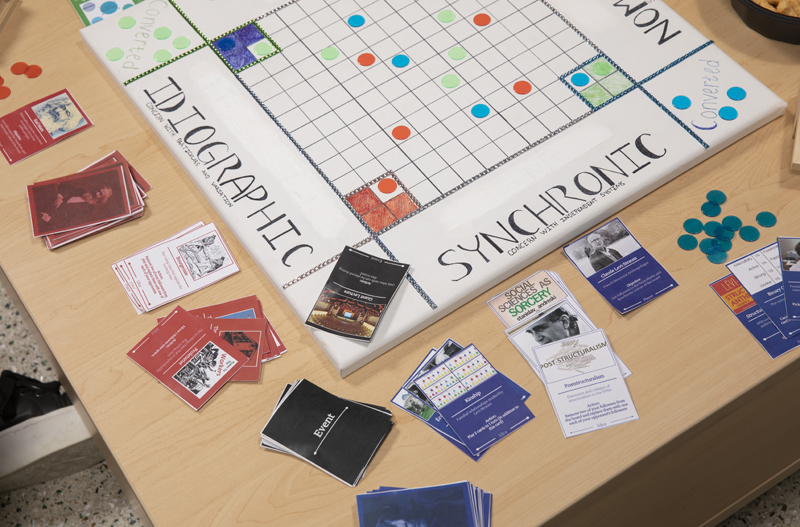 In SNID, players take on the role of prominent theorists such as Karl Marx and Franz Boas while trying to gain followers. Image Credit: Jonathan Cohen.

“By drawing cards, you must gain followers (bingo chips) that you move across the board in order to fully convert to your theory,” said Baumeister, who developed the game with Rebecca Dixon and Tessa Hopt. “Cards not only try to mimic theorists’ ideas, but they also include facts about each theorist. Event cards are drawn every round, and these create parameters in that round of gameplay that are relevant to events theorists lived through in their time.”

The player with the most converted followers wins SNID (which stands for synchronic, nomothetic, idiographic and diachronic).

“Since our board is a square grid with four spots and we only developed three characters, there is actually room for a whole new theorist,” said Dixon, a graduate student from Raleigh, N.C. “More cards could be developed, but I think that the essential concept of the game is complete.”

In the second game, DOXA, players are born at the same time and are assigned a race, gender and socio-economic status. The first five turns represent the first five years of life, and players learn about their own unique societal expectations by drawing cards at random. The cards determine each player’s life objectives such as health, wealth, children and power. The player closest to their societal expectations by the end of the game (which signifies their death) is the winner.

“The game’s name refers to Pierre Bourdieu’s term — which he defines as the things that are taken for granted in a particular society and the experience by which ‘the natural and social world appears as self-evident,’” said Kim Craig, a doctoral student from Minooka, Ill., who designed the game with Rabeka Ali.

Reno was in the process of moving when he found a PlayStation 2 video-game console in his closet. He purchased it in graduate school while doing research at a Michigan landfill for a project that would eventually become a book called Waste Away: Working and Living with a North American Landfill.

The console, which had been used to play a game with his fellow laborers, soon became part of Reno’s office in Science 1.

At the start of the spring 2019 semester, Reno added a PlayStation 3, a Super Nintendo Entertainment System, chess, Scrabble, Play-Doh and a giant puzzle to the office.

“I could make office hours not just more enjoyable, but reduce (student) stress,” he said. “Whenever a student walks in during office hours, my rule is that I have to be playing a video game so they are less likely to say: ‘I’m so sorry to bother you.’ I’m doing something that’s clearly not important! And they’re not bothering me.”

Reno then offers the student visitor an opportunity to play a video game, board game or work on a puzzle while discussing classes or life.

“I like the idea of re-inventing the University and pushing the limits of what education is,” he said.

The game-oriented office hours were such a hit that Reno decided to incorporate games as an alternative activity in his graduate-level class.

“I’m interested in experimenting with different forms of assessment in which you do something other than write an essay or take a multiple-choice test,” said Reno, who has had students write anthropological entries on Simple English Wikipedia.

Reno started the process by comparing theories to games during classes. For example, take two early and influential theories: functionalism and structural functionalism.

“Functionalism is like a puzzle: It sees social reality as a puzzle in which you have to assemble all of the pieces to create a whole,” he said. “Structural functionalism is like Jenga: A puzzle is being reassembled in real time while being in danger of collapsing.”

Reno and his class also had a game night in which they played games such as Settlers of Catan and applied anthropological theories to them. The possibility of designing a board game appealed to students like Craig.

“(Josh) is a creative thinker and pushes the boundaries of traditional academia,” Craig said. “He’s great at keeping his students excited about learning and is open to experimental modes of education. As someone coming from a background in visual art, I need this sort of freedom and support for out-of-the-box thinking.”

The two groups tweaked the games throughout the semester, working to determine which theories to apply.

“I used game-related analogies during the semester so students designing games would think more creatively about how to teach theory through a game,” Reno said. “I didn’t want this to be Trivial Pursuit: Who did this theory? They had to find a way to teach theory without it being about memorization.”

The students met with Reno again over the summer to modify the games so they can be shared with other anthropologists. Reno hopes to take the games to the American Anthropological Association meeting in Vancouver in November and have professionals play and comment on DOXA and SNID.

“It is tough but rewarding to translate anthropological theory into a game as a teaching tool,” Dixon said. “I think this project was beneficial because I had to learn these theories inside out in order to be able to teach them to others through a game.”

Reno was equally impressed by the first round of game design.

“I am blown away,” he said. “You come up with an idea and hope that it will work out. But (the students) have to run with it and put the time in.”

DOXA and SNID will come off the shelf this semester when it is time for Reno to discuss the assignment with a new group of ANTH501 students.

“We can play those games,” he said. “I can say: ‘This is what your fellow students created.’”