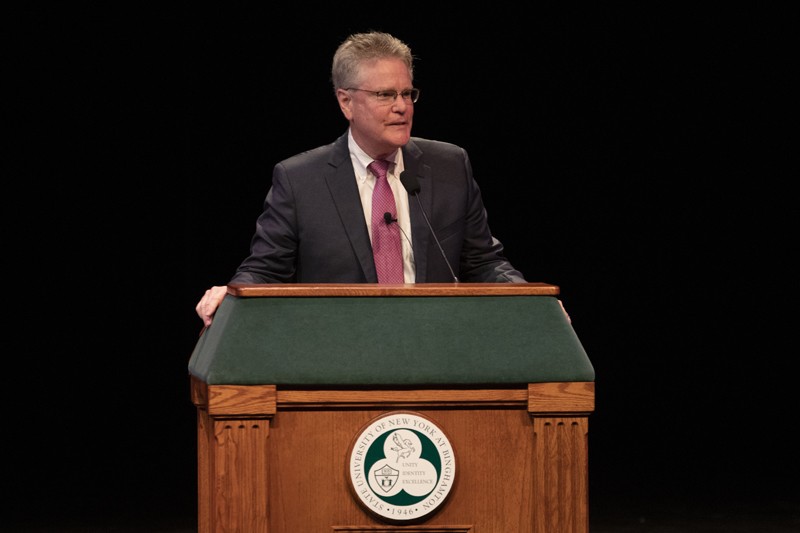 Care barriers such as cost, stigma and geography need to be removed for post-traumatic stress disorder (PTSD) progress to continue, a Binghamton University alumnus and pre-eminent clinician said at the 2019 Stephen A. Lisman Lecture.

“I can stand up here and say 40 years after starting my work in this arena that the vast majority of people with PTSD never get any treatment,” said Terence Keane, MA ’76, PhD ’79, SD ’11. “It’s a major challenge for us and it’s important to us as a professional field.”

Keane, a professor of psychiatry and clinical psychology and the assistant dean of VA research at Boston University, was the keynote speaker at the fifth annual Lisman Lecture. The event, which was held Sept. 9 in Watters Theater, honors Lisman’s 43 years of service and commitment to Binghamton University by bringing a nationally renowned clinical psychologist to speak on campus.

“Steve was the heart and soul of the clinical psychology program,” Keane said. “He directed it for so many years that I can’t even begin to say how much time he put in from his professional career to make it a premier (program).”

In his introduction, Lisman acknowledged that Keane’s clinical trials on the beneficial effects of exposure therapy on combat veterans with PTSD led to three decades of assessment and treatment advances.

“This work has affected the lives of thousands upon thousands of servicemen and women and even more whose trauma has come from everything from auto accidents to rape and abuse,” Lisman said.

For Keane, PTSD is “a global problem that needs a global solution.”

“It is a condition that exists across all linguistic, cultural and geographic boundaries,” he said. “It has been found by investigators of all stripes around the world.”

Almost 8% of Americans will one day experience PTSD, Keane said. Sixty percent of men and 50% of women will be exposed to a traumatic event, with 10% of women and 5% of men developing PTSD. The numbers are even greater in countries ravaged by civil wars: 37% in Algeria; 28% in Cambodia; almost 16% in Ethiopia.

People with PTSD often develop other psychiatric conditions such as depression, alcoholism and anxiety disorders.

“This represents a major challenge for the individual, certainly, but also for clinicians to identify the source of the problem as trauma and to provide the appropriate levels of treatment,” said Keane, who is also the director of the National Center for Post-Traumatic Stress Disorder’s behavioral science division.

Adding to the PTSD equation is a new generation of war veterans who are using VA health care at more than the twice the rate of veterans from past conflicts, such as Vietnam.

The increased use of improvised explosive devices (IED), meanwhile, has created the need for experts trained in neuropsychology and clinical psychology at VA centers, Keane said. The number of psychologists working at VA centers has tripled since 9/11, he added.

“PTSD as a condition entered into common, day-to-day parlance as a function of the events of 9/11,” Keane said. “After 9/11, everyone understood (PTSD).”

In 2012−13, the Obama administration developed a National Research Action Plan that created the Consortium to Alleviate PTSD (also known as CAP). The plan to devote additional funding to PTSD assessment and treatment was given a boost in late 2012 when the journal Nature addressed the issue by saying that studies to enhance psychological treatments had been “scandalously under-supported” and psychological therapies have the potential to make a difference.

“It was nothing short of remarkable,” Keane said. “I think this was the turning point for the national institutes of health in our country.”

CAP brought together leaders from defense and health agencies to identify needs and ways to make progress. It was decided that there should be “an intense focus on treatment studies,” said Keane, who is part of the consortium.

Over the next half decade, Keane and other colleagues from across the nation created a knowledge base and an evidence base by conducting more than 300 clinical trials. These trials, in turn, have brought psychologists together to continue to assess the different approaches to treating those with PTSD.

While trials have shown that exposure therapy helps those with PTSD, CAP continues to expand its treatment efforts. A mobile-phone application called PTSD Coach helps people “in real time,” Keane said. It has been downloaded 1 million times in Apple and Android formats.

“We think therapists are recommending it to patients or that patients are going online searching for something to manage their PTSD,” Keane said. “(PTSD) is not a 9−5 thing. People suffer at 11 p.m., 2 a.m. and 5 a.m.”

Other new developments include shorter, less-frequent treatment sessions; intensive therapy for couples; active-duty military treatments in which soldiers spend three weeks at a Fort Hood program; and an internet delivery of care that helps those self-manage PTSD.

“All of these efforts are trying to improve access to care,” Keane said.

There remains work to be done, as Keane estimated that 20−30 percent of returning veterans will have PTSD and a concurrent brain injury.

“PTSD is a treatable condition,” he said. “Evidence suggests somewhere between 40% and 50% of people in clinical trials lose the diagnosis of PTSD and another 15−20% improve their PTSD symptoms and other indications of psychological distress.”