Aaron Beedle, associate professor of pharmaceutical sciences at Binghamton University, in her lab where she studies how to reduce disease and extend life span. Image Credit: Jonathan Cohen. 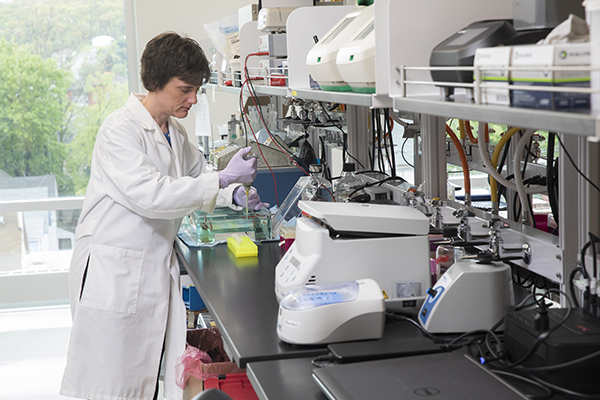 Aaron Beedle, associate professor of pharmaceutical sciences at Binghamton University, in her lab where she studies how to reduce disease and extend life span. Photography: Jonathan Cohen.
By Katie Ellis

Serendipity led Aaron Beedle from working with cells in a dish to developing therapeutics for patients suffering from muscular dystrophy.

A native of Alberta, Canada, she received her PhD in neuroscience in 2003 at the University of Calgary. As an undergraduate, she had studied physiology and pharmacology. In graduate school, she focused on neuroscience.

“My graduate school studies were more based on cells in a dish,” she says. “I did experiments to understand how proteins worked together — in a dish.

“My driving factor when I left grad school was to go to a postdoc and learn to use animal models and develop animal model tools,” she says. “The lab where I ended up doing that was at the University of Iowa, where we developed genetic mouse models for muscular dystrophy.”

Beedle was thinking of the technology when she started at Iowa, but the research sparked her interest. “The kinds of muscular dystrophy — from a scientific perspective — are fascinating, and the opportunity to bring those worlds together got me very much involved in muscular dystrophy,” Beedle says. “When I was in Iowa, I worked with pediatric neurologists and had an opportunity to talk to their patients and their families.”

Working with a complete organism is very different [than working with cells in a dish]...

So in 2010, Beedle started her own research, based on mouse models she made in Iowa, to learn how muscular dystrophy progresses and to test treatments. “Working with a complete organism is very different [than working with cells in a dish] and brings us closer to having something that could translate into human therapy,” she says.

Beedle began her independent laboratory in the Department of Pharmaceutical and Biomedical Sciences at the University of Georgia College of Pharmacy. There, she focused on understanding changes in muscle regeneration and cellular signaling processes in muscular dystrophies, with the goal of translating these processes into new therapeutic strategies.

In 2017, Beedle came to Binghamton as a tenured associate professor of pharmaceutical sciences.

“They made me an offer I couldn’t refuse,” she says. “One of the main attractions was that Eric Hoffman and ‘Raju’ [Kanneboyina Nagaraju] are here, and they’re muscle people and they created a neuromuscular disease group. The interaction with them was certainly a big pull, but a really major factor for me was some of the equipment and the technology we brought in to start the school.”

Much of Beedle’s work is analyzing tissue, looking at the entire muscle and mapping it out. Easier said than done, she says. To really look at a muscle — a tiny bit on a slide — researchers overlap between 10 and 25 photos to “rebuild” it and view it under a microscope. “We’re very good at it, but I wanted a slide scanner that prepares the image on its own,” she says. “Because the analysis we do after that is so time consuming, access to a slide scanner was a draw.”

Beedle and her research group are working on two large projects: One is trying to understand how the process that a muscle uses to rebuild itself is altered or abnormal in a particular kind of muscular dystrophy and another is running preclinical drug trials.

“Before I came here I had identified a particular class of drug that seemed to improve the disease in mice, so we’re in the midst of a preclinical study now,” she says. “We’re trying to understand if the drug can reduce disease, extend life span, improve muscle function and also determine if there are unexpected toxicities.”

The drug already exists and is used for other conditions, but not for muscular dystrophy, Beedle adds. “We know what toxicities it has for other conditions. The first phase — the lifespan study — is completed,” she says. “We found one of the doses we were using was too high, so we identified a safer dose. Now we’re looking to see if there is an improvement in muscle and any toxicities that should be considered if future testing in human patients is conducted.”

Beedle is also vice chair of the Department of Pharmaceutical Sciences at Binghamton and has helped build the PharmD program from the ground up. Her primary role when she arrived was to build and develop the department’s teaching plan. “I think we’ve evolved into a model where we work closely together on all aspects of the department to keep up to speed with training programs, acquisition of equipment and getting labs up and running,” she says. “It’s been quite a journey, and now we’re over the biggest hump for our department in terms of rolling out the PharmD program.”

In her time off, Beedle takes to the outdoors — skiing, hiking and kayaking when she can. “I just learned about the reservoir at Whitney Point, [N.Y.],” she says. “I have a kayak that I haven’t used in eight years and am raring to get it out!”