Lyme in the crosshairs

Enormous gaps remain in educating the public about Lyme disease. A center at Binghamton University is focusing on research and getting the word out. Image Credit: Illustration by Katie Honas. 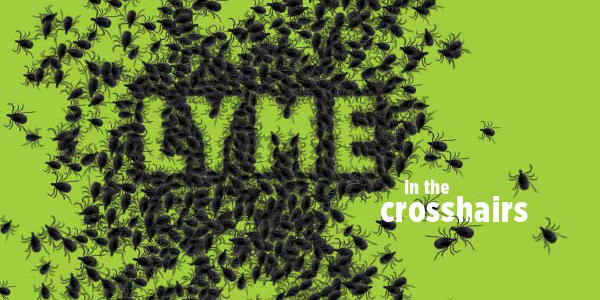 Enormous gaps remain in educating the public about Lyme disease. A center at Binghamton University is focusing on research and getting the word out. Photography: Illustration by Katie Honas.
By Diana Bean '81

When it comes to living among ticks — and the threat of Lyme disease — you probably know the drill: Use repellent and protective clothing when outdoors. Do a daily tick check. And seek medical advice for a known tick bite or for symptoms that indicate a possible bite.

Yet, when it comes to understanding how and where ticks thrive, recognizing and treating different stages of Lyme, and persuading people that they are at risk even in their own backyard, there are enormous gaps still to be filled by both scientific research and community outreach.

So, when the Tick-borne Disease Research Center officially organized in summer 2018, in conjunction with Binghamton University’s School of Pharmacy and Pharmaceutical Sciences, it was a magnet for scientists and public health practitioners, while offering hope to people affected by Lyme disease.

Ralph Garruto, professor of biomedical anthropology and director of the center, says it’s not unusual to field calls from the general public. He relates one call from a man whose 17-year-old son was having problems he suspected might be related to a tick bite. They lived out West, where tick-borne diseases are less common, and perhaps less recognized.

“He didn’t know what to do; he was reaching out, saying, ‘How can you help me?’” Garruto says.

The size and scope of the research center reflect how much is unknown about Lyme and other tick-borne illnesses. The center is a collaboration among SUNY Upstate Medical, Cornell University College of Veterinary Medicine, SUNY Broome, SUNY Delhi, the School of Environmental Science and Forestry, and faculty in four of Binghamton University’s schools: Harpur College, pharmacy, and the Watson and Decker schools. There are about 24 investigators (all but a handful from Binghamton) with specialties ranging from ecology to epidemiology to diagnostics to public education.

Their work supports the three pillars of the center:

“The center is timely, but it will take all three pillars in order to have a significant impact. The desired outcome is obviously to reduce the prevalence of tick-borne illnesses,” Garruto says.

“In the first pillar, we’re concentrating primarily on built environments, where the risk is high and there’s a lot of daily human activity in places where people live, work, eat and recreate.”

A prime example is a residential backyard.

In a project spanning a six-county area of the Upper Susquehanna River Basin (Tioga, Tompkins, Broome, Delaware, Otsego and Chenango counties), researchers are on the hunt for ticks and their primary — often infected — hosts, the white-footed mouse.

“We collect ticks from residential backyards; ticks are the primary vector that transmits the infectious agent for Lyme and other tick-borne illnesses to people and pets,” Garruto says.

Calculating the risk of human infection requires estimating the density of mice and ticks — not easy things to count — in an area. That’s where ecologists and geologists can help, by identifying the vegetation that appeals to ticks and mice, then using drones to visualize that vegetation geospatially within neighborhoods.

“People don’t feel threatened in their own backyard,” he says, “but what they do and how they behave is what puts them at risk.”

Is it Lyme or something else?

More than 300,000 people in the United States contract Lyme disease annually, making it the most commonly occurring vector-borne disease, says the Centers for Disease Control and Prevention (CDC).

But Lyme isn’t always obvious, and diagnostic testing is imperfect, says Wesley Kufel, clinical assistant professor in the Department of Pharmacy Practice at Binghamton’s School of Pharmacy and Pharmaceutical Sciences.

“The current diagnostic testing strategy endorsed by the CDC uses a two-step algorithm: An antibody test followed by a confirmatory western blot if the first test (the assay) is positive. The issue with this strategy is it results in a lot of false positives,” he says.

And while it can reveal that a patient has Lyme, it can’t say whether the patient is getting better after antibiotic treatment. The only indication is an improvement of symptoms.

“These are people who’ve been diagnosed and treated for Lyme disease, but are still experiencing these nonspecific symptoms: fatigue, headaches, muscle aches and ‘brain fog,’ or unclear thinking,” Kufel says.

Not everyone in the medical community agrees that post-treatment Lyme syndrome is a disease; the symptoms are too similar to other syndromes and there’s no definitive testing.

“One of the goals of the center is to improve diagnostic testing and monitoring strategies, particularly in the post-treatment Lyme syndrome phase,” says Kufel, who practices as an infectious diseases pharmacist at SUNY Upstate, where Lyme patients seek treatment.

Another area of interest for Kufel is the use of doxycycline prophylaxis after a bite from the tick that is responsible for Lyme disease. In Rhode Island, he says, people can go to a pharmacist for the one-time prevention-dose of doxycycline — no doctor visit necessary. There are criteria the patient must meet to receive the medication, but this strategy improves the accessibility and availability of care, he says.

He is hopeful that such a protocol can be adopted in New York state.

“It’s low-hanging fruit, but we don’t want to overprescribe an antibiotic. There’s a balance that needs to be achieved.”

Think it won’t happen to you?

Sarah Lynch, a clinical assistant professor at the pharmacy school, says a lot of her interest in educating the public about Lyme goes back to high school in Horseheads, N.Y.

“I had a friend who was really, really sick with Lyme disease. We were in 10th grade and she had seizures all the time and was up at Strong Memorial [Hospital] in Rochester a lot. Everyone asked, ‘What is Lyme disease?’”

In 11th grade, Lynch and her friends started a Lyme Walk.

“We raised about $12,000, brought in speakers and incorporated into a nonprofit during my senior year in high school. I’m still involved with that group, which is A Hope 4 Lyme, Inc.,” she says.

Being part of the Tick-borne Disease Research Center is a way to continue her personal goal to educate the public and doctors about the risks of Lyme and the consequences of ignoring them.

In 2018, Lynch was awarded $7,500 from the Stephen David Ross University and Community Projects Fund to facilitate collaboration between the pharmacy school and Southern Tier Lyme Support, Inc. to increase awareness and educate the public and healthcare providers in Broome County about testing, treatment and prevention of Lyme disease.

One result has been the ability to send a local physician to the International Lyme and Associated Diseases Society conference, which is eye-opening, Lynch says. Doctors who attend learn more about Lyme and make contacts with other doctors, then bring that knowledge back to their practices.

Another education effort has been a billboard campaign that also directs people to Southern Tier Lyme’s website. Making information available, making it easy to understand and getting through people’s daily information overload is hard.

“You see the posters and think, ‘Lyme disease — whatever.’ But people who’ve had it don’t even want to go outside anymore,” Lynch says.

The center collaborated on its first annual Lyme workshop for researchers held at Cornell University in January 2019, and a second one is in the planning stages. Along with the annual Lyme disease conference held at Binghamton University, this work is helping to amplify the message that reducing the incidence of Lyme is not just the responsibility of scientists. The public plays a role, too.

“It’s awareness and education that probably will achieve the most success in reducing Lyme disease,” Garruto says. “It probably won’t burn itself out ecologically. We won’t get rid of all the ticks; it’s just too hard, because birds and deer carry and distribute them from place to place.”

He hopes the University will find a physical home for the center on the Binghamton campus, which will make research and public education easier for everyone.

“Lyme is the perfect example of why we need a research center,” Lynch says. “This isn’t something where you just look at the clinical side, or just look at the epidemiological side or just public health; it has to be a multipronged approach to target and research it. The fact that we’re bringing together all these people from such different backgrounds is impressive, but necessary.

“When people hear that we have a center, they’re really excited and appreciative.”

As for her high school friend, Lynch reports she’s doing well and went on to college.