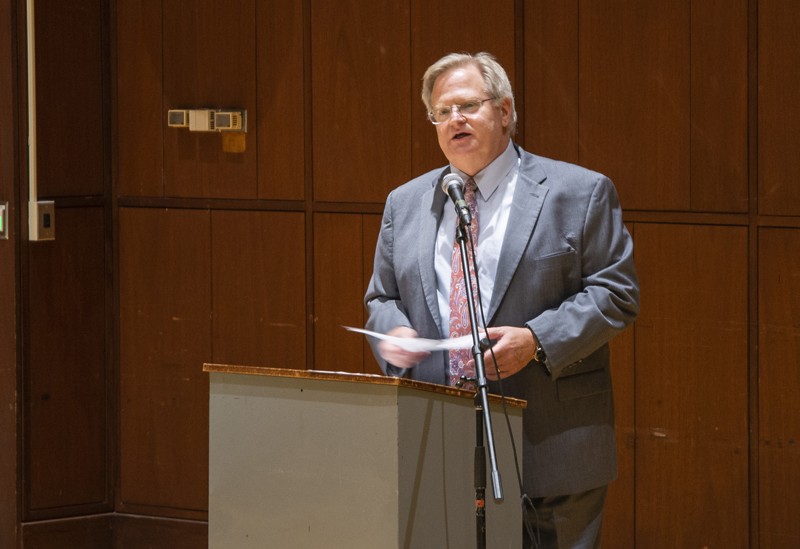 For Refugees International President Eric Schwartz ’79, LLD ’14, there are encouraging signs in the challenge to ensure basic protections for asylum seekers and internally displaced people.

“Students like those here at Binghamton University remain committed to using their education and skills to sustain efforts and create prospects for a brighter future for hundreds of millions of people around the world,” he said.

Schwartz, who has had a three-decade career focused on human rights and humanitarian issues, delivered the third annual John and Lawrence Bonzani Memorial Law Lecture on Sept. 18. He discussed “Protecting the Human Rights of Refugees and Other Forced Migrants” with students and faculty gathered at Casadesus Hall in the Fine Arts Building.

As president of Refugees International since June 2017, Schwartz leads an organization that “seeks to promote humanitarian assistance and protection for refugees and other forced migrants through first-hand reporting and through advocacy,” he told the audience.

According to the latest study from the UN Refugee Agency (UNHCR), more than 70 million people have fled their homes around the world due to persecution, violence and violation of human rights. More than 25 million of those people are outside their country of origin, making them refugees. Millions more are displaced each year by natural disasters impacted by climate change.

“It might seem impossible to feel empathy and connectedness to 70 million people forced to leave their homes,” said Schwartz, who served as U.S. assistant secretary of state for population, refugees and migration from 2009-11. “The statistics are so overwhelming. Addressing the needs of millions can be daunting.”

But there is a simple reason why the world should care about those 70 million people.

“Our common humanity demands that we care,” Schwartz said. “The principle of humanity means that the suffering of one person is no less significant or worthy of compassion and response than if the suffering (person) was (family).”

The notion of common humanity also can serve as an inspiration to help, Schwartz said.

“This seems especially important in a country where the majority of citizens have forbearers who fled countries of origin to find refuge here,” he said.

The United States has been “well served” by immigration in the past, Schwartz added, and has successfully promoted and funded the security of refugees.

“Unbridled hostility toward migrants makes little sense for the United States,” he said. “It’s impossible to imagine that the U.S. could’ve become the leading economic and political power it is today without the contributions made by significant and substantial levels of immigration.”

Governments around the world are now rejecting the “welcome the stranger” mentality, Schwartz said. This is especially true in the United States, where a “parade of horribles” has taken place, he said.

“These include unprecedented reductions in the U.S. Refugee Admissions Program and efforts to completely end asylum for vulnerable Central Americans,” said Schwartz, adding that President Trump also has proposed cuts to humanitarian aid.

Schwartz noted that there has always been a “fragile” consensus in the United States and around the world when it comes to the principles of inclusion.

“Perhaps most disturbing has been the hateful, evidence-free rhetoric and the demonization of forced migrants and asylum seekers by political leadership in the United States,” he said.

“At key points in our history, we have relied on leadership to promote principles of inclusion in circumstances where public opinion was contested.”

For Schwartz, the challenge must be confronted with a sense of perspective and an emphasis on perseverance and engagement.

“There have always been loud voices of intolerance, appealing to our fears rather than our hopes,” he said.

The current signs of encouragement that Schwartz sees include U.S. aid to places such as Syria and South Sudan; a global compact on migration; governments in Uganda, Jordan, Turkey, Ethiopia and Colombia working to improve refugee conditions; and lawyers continuing to serve on the “front lines” of protections.

“From Syria to Somalia to Bangladesh, Burma and Burkina Faso to the southern border of the United States,” Schwartz said, “we seek to ensure that the voices of vulnerable populations are heard in the halls of political power.”