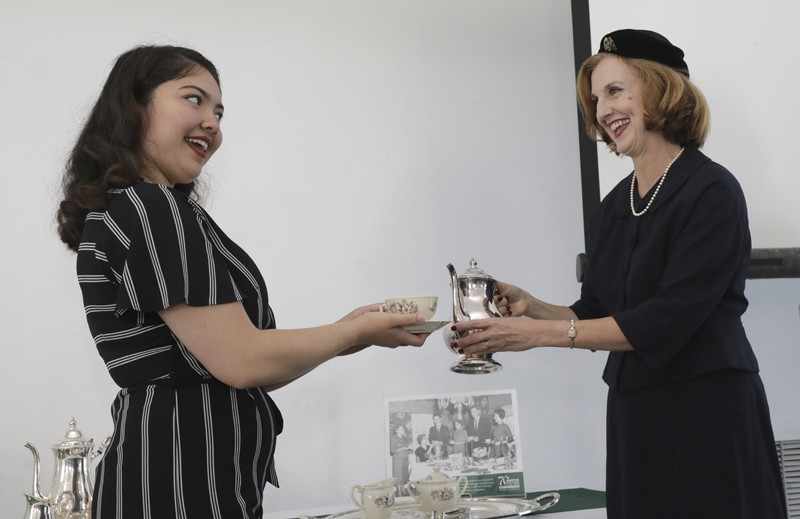 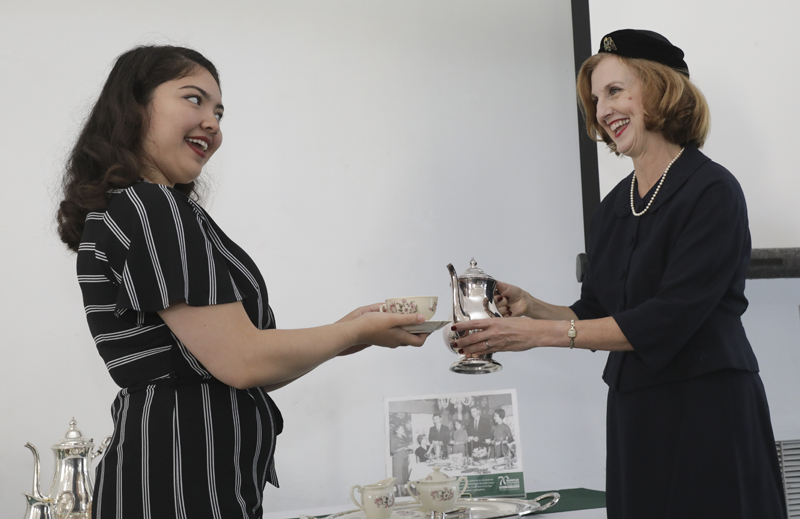 For Alex Huppé ’69, standing in Colonial Hall brought back boyhood memories of Christmas parties at the former Harpur College home.

“Wanda (Bartle) herself handed me a cup of Sealtest ice cream,” recalled Huppé, the son of Harpur College founding faculty member Bernard Huppé. “Then we went into the next room and she showed Walt Disney cartoons on a little 8-millimeter projector.

“It was a time when we all knew each other. I knew the Bernardo kids, the Belniak kids, the Gordon kids, the Van Riper kids. We lived in a small enclave in Maine, N.Y. … The faculty lived there and came to work in this building.”

The celebration included historic photos, yearbooks and memorabilia; a short video about Harpur College’s early years (the audience got the biggest kick seeing footage of short-lasting mascot Harpo the Burro); a ceremonial “pouring of the tea”; and a singing of the Harpur alma mater led by student Kelsey Watts. Participants received a 70th birthday mug, honey from Nuthatch Hollow and tea cultivated by Harpur students from Carlton Farms in Montrose, Pa.

Besides throwing holiday parties, Wanda Bartle also used Colonial Hall to welcome new faculty members and their families, and hosted teas for the campus community. In that spirit, Chilton dressed as Mrs. Bartle after corresponding with John Bartle, LHD ‘16, a grandson of Glenn and Wanda Bartle who is now a dean at the University of Nebraska-Omaha.

“He asked that I pass along all of the best wishes of the Bartle family,” Chilton said. “He gave me his blessing to channel his grandmother — and insisted that I must wear white gloves unless serving or drinking tea!”

Chilton said Glenn and Wanda Bartle would be “in awe” of the growth and success of the school they founded.

“It is because of their vision, hard work and perseverance, coupled with the support of the community, the generosity of donors, and the outstanding efforts of faculty, staff and administrators, that set Harpur on the path to becoming the world-class university it is today,” she said.

Chilton also praised the importance of alumni support in the accomplishments of Harpur College and Binghamton University.

“You are a living testament to the value of a broad, liberal arts background,” she said. “You are business leaders, teachers, doctors, artists, lawyers, writers, researchers and much more. It’s been my special pleasure over the past two years to meet our alumni. You have a profound influence on your professions and the world. You serve as an inspiration to our current students.”

Pavlovskis-Petit, Binghamton University’s longest-serving faculty member, saluted the students she has been teaching since 1962.

“The students have been consistently impressive,” said the comparative literature professor. “And I still love what I’m doing and want to continue for a while. I have the greatest love and respect for this institution.”

Pavlovskis-Petit recalled how she initially interviewed in Harpur’s then-administration building. She was asked by a secretary about her typing and shorthand skills.

“Something told me I was in the wrong building!” she said. “At that time, a woman coming for an interview was immediately typed as secretarial material.”

Despite cultural changes and name changes to the University, one thing has remained constant, she said.

“Human nature is the same. Whether you are Nigerian, Chinese or whether you come from Vestal, N.Y., we have much more in common than what sets us apart. We are still the same human beings.”

Huppé, whose father wrote the college’s “From Breadth through Depth to Perspective” motto with Robert Rafuse in 1954, continues to give back by serving on the Harpur Council Advocacy Council and the Binghamton University Foundation board of directors. He credited Glenn Bartle’s direction and ability to bring leading scholars — such as Aldo Bernardo, John Weld, Kenneth Lindsay and Bernard Huppé — to Endicott for the school’s survival and success.

“It was a remarkable faculty that came here when these buildings weren’t anything — just Quonset huts,” Huppé said. “It was a tremendous leap of faith for these scholars to come here. And the students took this leap of faith to say their degree would mean something someday.

“There were lots of colleges that started and were fueled by the G.I. Bill,” he added. “A lot of them failed. This place didn’t. That had a lot to do with Glenn’s vision.”

Bartle’s vision of a Swarthmore on the Susquehanna — a top liberal-arts education in which everything is questioned — is alive today, Huppé said, as Harpur College students are “self-analytical, reflective and philosophic.”

“Glenn Bartle came here, saw this old building, Quonset huts, dirt and mud. He saw a liberal-arts college,” Huppé said. “I think Harvey is in that same mode. He goes to derelict buildings in Johnson City and sees a medical complex. There is the same drive and vision. … I was pleased when he appointed a historian (Donald Nieman) as provost. It shows that he understands the importance and centrality of Harpur College and the liberal arts here.”

Harpur’s year-long celebration will continue through 2019-20 with events in New York City in October, January, May and June; Los Angeles and San Francisco in February; Washington, D.C., in April; and Long Island/Westchester County next spring and summer.

“While many things have changed with Harpur College, one important thing remains the same,” Chilton told the audience. “Our commitment to offering talented, highly motivated students a liberal-arts education that is second to none, in my opinion, and to produce graduates who think big and work to solve the world’s problems.”