Once upon a parasite 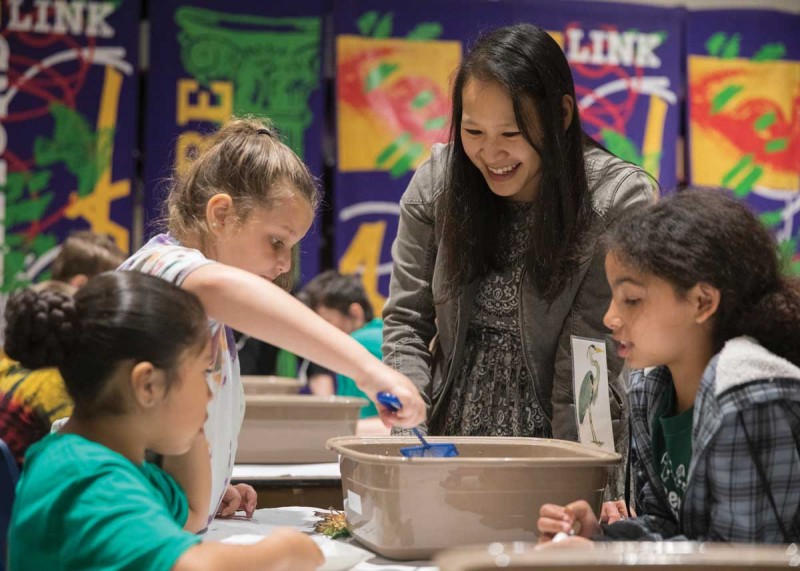 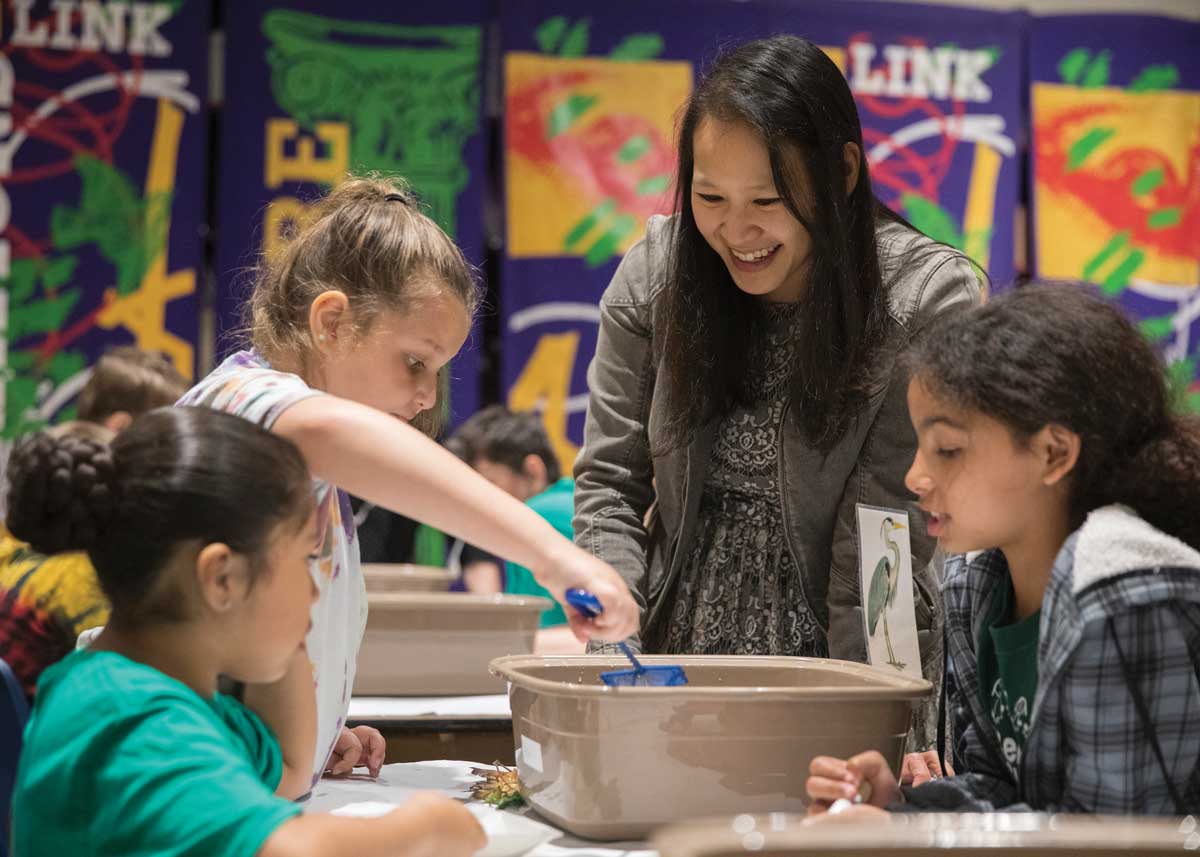 Not all parasites are bad. Nearly every third-grader in the greater Binghamton area could tell you that. They could also explain how changes to an ecosystem can disrupt a parasite’s life cycle and how this disruption can affect other species — even humans.

Yes, third-graders in the Binghamton area know that much about parasites, and it can all be traced back to the research of a faculty member.

“People don’t often realize the relationship humans have with wildlife and the impact they have on each other,” says Jessica Hua, assistant professor of biological sciences. “We’re hoping to change perceptions and decouple the idea of ‘these are humans — and this is wildlife.’ Instead, we want people to realize that everything is connected.”

Hua’s research goes beyond just exploring the connection between human activity and wildlife. She emphasizes outreach and considers it to be a pillar of her lab.

“What does it matter if we’re publishing all of this research if it’s not actually being communicated to the people who can make a difference?” she says. “It’s important for me to find ways to effectively communicate that research to those people.” And whether it’s third-graders, farmers or art aficionados, Hua’s lab is using outside-of-the-box methods to reach all kinds of audiences, with an ambitious goal of changing the world.

A prism of different views

Hua’s research lies at the intersection of the fields of toxicology, ecology and evolution. In a broad sense, she is looking into how entire systems are affected by the introduction of contaminants.

“The traditional approach is to put an organism in a dish, add a contaminant and see what happens. But that’s not realistic,” she says.

“In nature, organisms are navigating environments loaded with diverse stressors that can influence how they respond to contaminants. For example, the presence of a predator can increase stress levels, which can take a toll on the immune system, which can make organisms more susceptible to the effects of contaminants.”

To achieve the laboratory’s goal of integrating this natural complexity into toxicology, Hua incorporates evolutionary and ecological approaches. From an evolutionary standpoint, she studies how organisms can evolve and become tolerant to chemicals. From an ecology standpoint, she then studies what the costs of these adaptations are to an entire system.

“If you become tolerant to a contaminant, you’re expending a lot of resources to develop that tolerance. While it may allow you to persist when faced with contaminants, it can make you more susceptible to something else, which can initiate a domino effect that can disrupt the balance of a natural system,” Hua says.

Hua believes the complexities of her research make her findings easy to misinterpret. That’s where parasites come in.

She cites an incident in which an agricultural publication took her findings that common pesticides kill parasites and spun it to say pesticide contamination was a good thing.

“They implied that, ‘The pesticides you’re using are good because it reduces the number of parasites that can infect animals.’ What they didn’t include was that the same pesticides that harm parasites also harm the host by making hosts more susceptible to the parasite,” she says.

These instances fuel Hua’s drive to collaborate with students and professionals from across disciplines to find unique ways to accurately present her findings to the public.

One outlet was an art show designed by graphic design major Benjamin McLauchlin ’18. The show featured pieces that displayed the diversity of organisms found in wetland ecosystems.

Hua measured the effectiveness of the show using pre- and post-show surveys, and found a 20% increase in awareness of the importance of wetland diversity among the visitors.

“We had some visitors tell us before entering that they didn’t know why they should care about mosquito-filled wetlands. And then as they were leaving they were telling us they realized the important role wetlands play. Some were even telling us they’d be willing to contribute to bettering these environments,” Hua says.

The success of the art show spawned a new idea: What if the lab could use artwork to help educate children?

Hua collaborated with McLauchlin to develop a children’s book focused on the lab’s research with parasites.

“When you say parasite, most people immediately react with disgust. But in reality, they are crucial to maintaining a healthy ecosystem. Not only do we need them to regulate population sizes, but many parasites are an important food source for some animals,” Hua says.

Vanessa Wuerthner, a biology PhD student who works in Hua’s lab, undertook the ambitious goal of getting the children’s book taught to third-graders in over a dozen Binghamton-area school districts.

In collaboration with the Roberson Museum and Science Center in Binghamton and the Broome- Tioga Board of Cooperative Educational Services, and with grants from the National Science Foundation and the Robert F. Schumann Foundation, Wuerthner developed a lesson plan that could be deployed to elementary schools.

What does it matter if we’re publishing all of this research if it’s not actually being communicated to the people who can make a difference?

“I have some experience with lesson plans, but this was on a different scale,” Wuerthner says. “I did a lot of research, and it took months to develop.”

A hands-on component was essential, Wuerthner says. Working with Christina Mack, director of education at Roberson, a field trip to the museum was designed so that students who had read the book could become researchers for a day.

They then take part in a lab activity that mimics what it’s like to conduct research in a wetland pond. After netting out a number of (fake!) snails and frogs, they determine whether or not parasites are present. If parasites are not present, the students then hypothesize why.

From there, they look at live tadpoles under a microscope. For many of the students, it’s the first time they have ever used one.

“I hope the students get excited about nature and think about things differently when it comes to science,” says Wuerthner. “You can mold children’s outlook on their surroundings at a young age, and I think getting them away from phones and tablets and into a lab is a great way to do that.”

Developing a lesson plan about parasites for third-graders is not something Wuerthner ever expected to do, but it’s emblematic of the kinds of experiences Hua wants her students to have. Prioritizing the development of soft skills in her lab, Hua gives her students opportunities to grow stronger in the areas of project management, conflict resolution, communication and working collaboratively across disciplines.

“It’s not enough to do just the science. We’re working on a societal issue,” Hua says.

“There’s a disconnect in getting people to understand why our impact on the environment matters. Is it that people don’t care? No, I know people care. We think there’s a gap in communication. By emphasizing soft skills, we hope to make scientists better at bridging this gap between the technical aspects of research and the broader significance of the research to society.”

Wuerthner says she’s noticed a shift in her own professional development from working with Hua.

“It’s not that I’ve never done outreach before in my undergrad or master’s programs, but I find that I’m doing it better,” she says. “I really think I’ve improved on the communication aspect of it all, especially with members of the community.”

And despite the increasingly urgent impact humans have on the environment, Hua remains optimistic, an outlook she attributes to her upbringing.

Hua’s parents immigrated to the United States from Vietnam shortly after the Vietnam War. Her dad went on to have a long career as an engineer who believed that any problem could be fixed.

“I have so much faith in humanity, and I’ve seen how hard things can be,” she says. “There are people all over the world, including my parents, who come from nothing and overcome it. With everything we as a people have faced, we find ways to figure it out.” ​