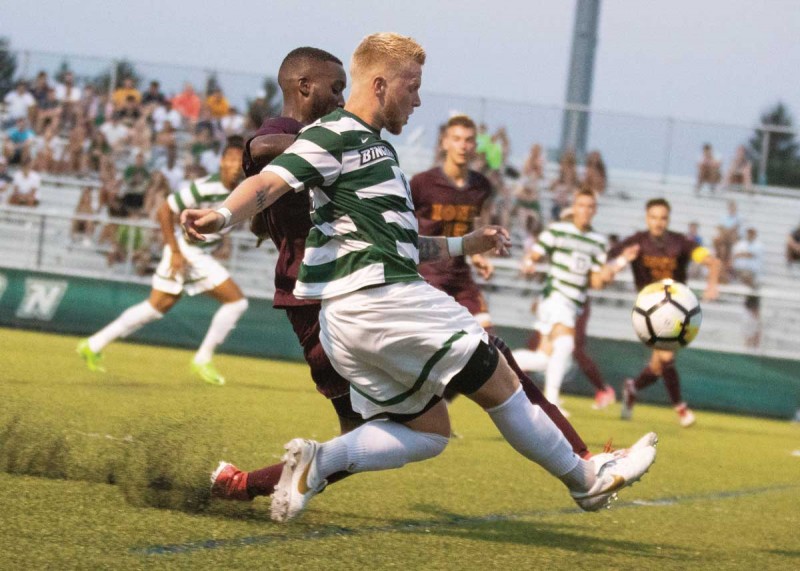 ​Noah Luescher traveled 4,000 miles and arrived at Binghamton University for the first time in August 2017. A native of Switzerland, he was stepping into an unfamiliar culture, with one exception: soccer. The incoming freshman had been recruited to join the Bearcats.

Two years later, he is one of the top players on the men’s soccer team, while in the classroom, he has a 3.7 GPA in business management.

Luescher grew up in Meisterschwanden, a small village in the northern part of Switzerland with a population of about 3,000 — roughly equivalent to freshman enrollment at Binghamton. He started playing soccer when he was 2 years old and never stopped.

By the time he was 17, scouts were approaching him. After a match in January 2017, Luescher was contacted by SportsScholarshipsUSA.com. Scouts had watched him play and told him about the possibilities afforded by playing college soccer in the United States. It was a turning point for Luescher as he considered his future.

“I got some good opportunities in Switzerland to play professionally, but I eventually got a great offer from Binghamton, which allowed me to pursue my academic career as well,” he says. “Back home, I would have had to decide between either soccer or college. At Binghamton, I would be able to do both.”

When he arrived on campus, it didn’t take long for Luescher to excel on the soccer field. In his freshman year, the midfielder was named the America East Conference Rookie of the Year. As a sophomore, he led the Bearcats in scoring.

Off the field, Luescher achieved another goal — one that didn’t involve soccer — when he was accepted into the School of Management his sophomore year.

Luescher was named to the America East Commissioner’s Honor Roll his freshman year and was a repeat selection his sophomore season. This past May, he was inducted into the National College Athlete Honor Society. He attributes his success to hard work and good time-management skills.

“Being a student-athlete is all about time management,” he says. “It can be overwhelming, but if you manage your time well, go to your classes, get your work done and stay on top of your game, you’ll be fine.”

This past year, Luescher added another level of commitment, this time through his team’s community involvement in organizations such as the Vestal Special Olympics, CreateABLE Fair Play and SUNY’s Got Your Back.

He also joined Binghamton’s Student- Athlete Leadership Institute, known as Explore, Engage and B You. Since 2017, the group has given student-athletes the opportunity to grow as leaders on their teams and at the University.

And in May, Luescher was named to the America East Helping Hands Team for his work in the community.

“It was an absolute honor,” he says. “We are able to spend time with a lot of people from the area and become role models for them, which is absolutely fantastic and motivating.”

Now midway through his college career, Luescher is starting to appreciate how far he’s come.

“I’ve grown a lot since I came here two years ago,” he says. “Adapting to a new culture and starting a new life all by myself has made me a lot more mature and taught me a lot. I’m really looking forward to finding out what the next two years at Binghamton will bring and how much more I can grow as a player, a leader and a person.”