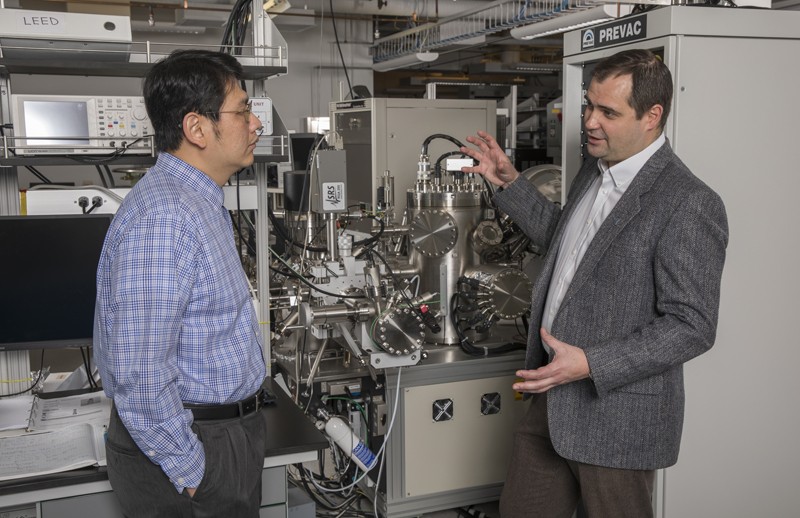 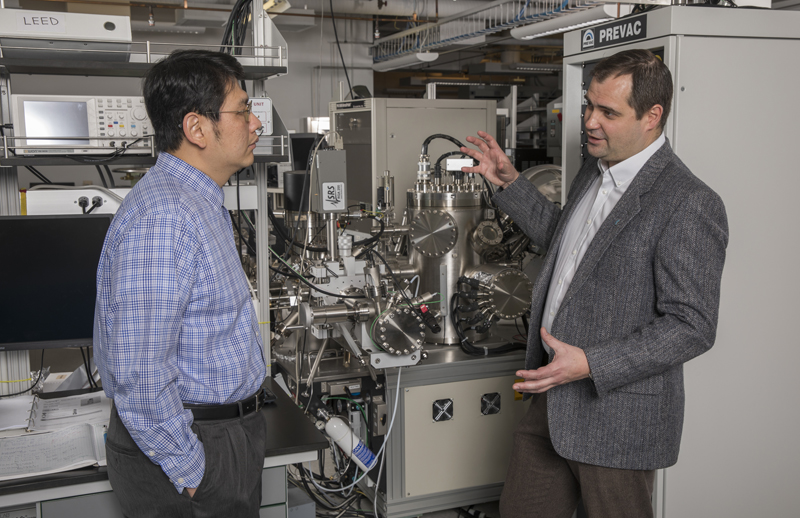 As competition in the new global race for technology becomes increasingly fierce, researchers are pushing the boundaries of traditional silicon-based computing.

Physicists at Binghamton University and the Georgia Institute of Technology are working to develop devices that revolutionize how computing works. They’re attempting to replace silicon transistors with new materials that will mimic the actions of the human brain in order to maximize energy efficiency and explore the potential of artificial intelligence.

“What we are trying to do is a fundamental study,” says Associate Professor Louis Piper, director of the Materials Science and Engineering Program, and Binghamton University’s head researcher for the study. “We want to (create) something that will be doing a similar thing as what the brain does, which is firing a neuron.”

The push to embrace neuromorphic engineering stems from one simple fact: The human brain is monumentally more efficient than any computer we have to date.

Containing 100 billion neurons and responsible for every thought and feeling we have, the human brain uses only about 20 watts of power, comparable to that of a dim light bulb.

A gaming computer, on the other hand, can

use around 700 watts while doing considerably less than the brain.

“Those neurons are just firing, doing memory and logic all together in one process,” Piper says. “If we consider the world’s best supercomputer at the moment, it could only do something comparable to about 1 billion neurons with about a thousand synapses. Can you imagine how much energy that uses?”

This research, led by Piper and condensed matter theorist Wei-Cheng Lee, an assistant professor of physics, is the heart of Binghamton University’s role in a five-year, $7.5 million project. The project is called CEREBRAL, which stands for Cross-disciplinary Electronic-ionic Research Enabling Biologically Realistic Autonomous Learning, and it is part of the Department of Defense’s Multi-University Research Initiative (MURI), in which select researchers from multiple academic institutions receive funds to accelerate research and support graduate students’ education and training.

The main focus of CEREBRAL lies in replacing transistors — devices that control a computer’s binary logic by switching on and off — with neuristors, which act like neurons. Unlike a traditional transistor, a neuristor would naturally generate a pulsed spike when a threshold is reached, just like the neurons in the brain.

“The whole goal of the project is to advance the development of neuristor technology,” says Matthew Wahila, Piper’s postdoctoral researcher. “Current silicon-based computing is hitting a wall. We can’t shrink the transistors down any smaller. We’re at the limits of what physics will allow, because we’re getting down to the atomic scale.”

The development of neuristors would breach this silicon wall, bringing about devices of simpler architecture that are both scalable and efficient.

The project’s principal investigator is William Alan Doolittle, a professor at Georgia Tech’s School of Electrical and Computer Engineering.

“You always want to surround yourself with people who push you to be stronger scientifically but also production-wise,” Doolittle says. “Louis and Wei-Cheng offer complementary expertise, adding both depth and breadth to our MURI team.”

Doolittle’s team works to develop the devices that would require the materials that Piper’s team investigates. Once they’ve got a working device, they can use the proper materials and finally put them in a real computer. For the Department of Defense, this could mean low-power image processing for Air Force drones. For Piper and his team, this could mean someday developing an artificial retina that is responsive to light.

“I’m very lucky to have Louis,” Lee says. “As a theorist, usually we don’t have too much chance to directly say something about experiments, particularly if the data is really ugly in a sense. It’s really hard to say anything conclusive. Louis certainly has so much beautiful data, and for theorists, that’s the most important thing.”

Piper and his students are primarily materials scientists, focusing their work on understanding and testing physical material candidates for their desired circuit design. Lee’s team creates the theoretical models that allow the group to interpret the results of Piper’s experimental data. Blending their respective disciplines, they’ve enriched both sides of the project and are constantly learning from each other.

“I enjoy my interactions incredibly with Wei-Cheng,” Piper says. “I’ve learned so much from him. I can go to him with my squiggly lines that I’m really excited about, and he gets excited about them too!”

To Lee, being able to work with physical data rather than lofty abstractions has been grounding.

“It has really brought me back to reality,” Lee says. “As a theorist, you can easily publish a paper that is so advanced but nobody will care. But it turns out this kind of project is very real, and you can solve real problems. I feel like a person who’s really starting to believe that this is the future for theory.”

The excellent data, Piper says, is a testament to the students, who include Wahila, Galo Paez Fajardo and Sebastian Howard.

“We’ve put together a team where people are very open when they don’t understand things, and very open when they do,” Piper says. “The best thing about my job is being able to sit and get excited with very bright undergraduates, graduate students and postdocs who are willing to look at this squiggly line spectrum and start trying to understand it.”

Most of Piper’s work is done at national facilities in places like Chicago, Long Island, Berkeley and Oxford. At the team’s most recent meeting in Georgia, members presented their first-year results.

“We are a very productive research group in terms of research output, papers we publish and national laboratory time we get from our proposals,” Wahila says.

Though they are proud of their accomplishments, the team members remain mindful of the areas that need improvement. To help with more effective communication, for example, Piper has reached out to graphic designer Gokhan Ersan of the Department of Art and Design.

“We need to be better at visually explaining, because we can use visual constructs in lieu of mathematics,” Piper says. “So we’ve been working with him to try to develop that.”

For Lee’s graduate student Christopher Singh, visualizing the microscopic materials of the CEREBRAL project has put the larger world into perspective.

“I always liked this quote by William Blake, which is ‘to see a world in a grain of sand,’” he says. “Every single material you look at is this crazy world in itself.”

Taking the lead in such a far-reaching project means the researchers are faced with what Piper calls “a whole playground of physics and chemistry that we have to understand,” and they must move forward one step at a time.

“That is ultimately what we’re trying to do, you know. Change the way computation is done,” Singh says. “We are pushing the boundaries of what people know how to do.”