Center for the Study of the 1960s launched during Homecoming 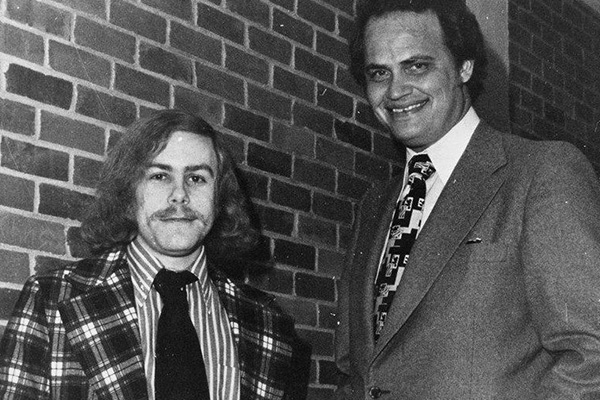 A new Center for the Study of the 1960s, designed by Binghamton University Libraries, will promote excellence in research, scholarship, teaching and programs in the social, cultural and political history of the United States during the “long” decade of the 1960s (1960–75). Established with the support of a gift-in-kind from Stephen McKiernan ’70, the center focuses on a period of unique significance in our nation’s history, particularly with respect to social justice movements, that offers lessons that still resonate today and will into the future.

According to Dean of the Libraries Curtis Kendrick, the center will have a special emphasis on the University and Southern Tier region.

“We are building collections in multiple formats to help tell the story of the times, and are acquiring and organizing research-quality content currently available on the open web,” he said. “Our plans are big and our aspirations high!”

An avid collector, McKiernan recently donated approximately 10,000 volumes to the Libraries, mostly on post-World War II United States and a special focus on the period 1960–75, in particular. His donation includes period magazines, framed photographs, ephemera and other objects of material culture. The gem of the collection is a series of oral interviews that McKiernan conducted with writers, important scholars from around the country and college presidents, as well as politicians, Vietnam vets and activists who led the anti-war and civil rights movements that defined the period.

“As a college administrator at three different universities over 30 years, I had access to many national speakers who came to campus to lecture on topics with historic overtones,” McKiernan said. “I interviewed U.S. Sen. Eugene McCarthy, civil rights leaders John Lewis and Julian Bond, and Vietnam veterans/leaders Joe Galloway, Jan Scruggs, Bobby Muller, Diane Carlson Evans and Phil Caputo. … Between 1996 and 2013, I interviewed 275 unique individuals who played major roles in the defining movements of the times.”

McKiernan’s hope is that the center will preserve these interviews for generations to come. “My hope is that it will unite factions that were often divided in the tumultuous 1960s,” he said. “The center will allow everyone to have a voice and provide a space in which we can disagree strongly and still be united in our shared history.”

The center is building on McKiernan’s collection of audio interviews by conducting oral interviews with Harpur College alumni from the 1960s to the mid-1970s.

“It has been striking to observe what a difference just a year or two in graduating class year has made in the overall student experience at the University,” Kendrick said.

To stay informed about the center’s progress, contact c1960s@binghamton.edu.