Binghamton University President Harvey Stenger told the audience that, from its inception in 1969, the Decker School of Nursing has been at the forefront of changes in the profession, and its curriculum has always looked to address pressing challenges in our community, state and nation. Image Credit: Jonathan Cohen. 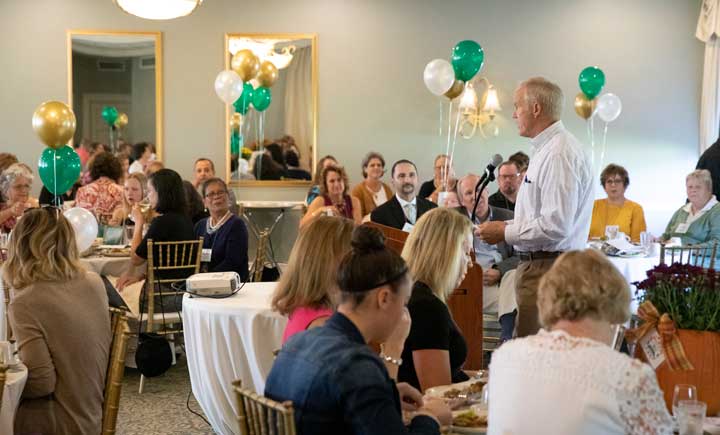 Binghamton University President Harvey Stenger told the audience that, from its inception in 1969, the Decker School of Nursing has been at the forefront of changes in the profession, and its curriculum has always looked to address pressing challenges in our community, state and nation. Photography: Jonathan Cohen.

On Friday, Sept. 20, almost 100 former and current faculty, staff and students attended a cocktail reception at Traditions at the Glen. A highlight of the evening was the appearance of Assemblyperson Donna Lupardo, who presented Decker Dean Mario Ortiz with a proclamation recognizing the school’s milestone achievement. 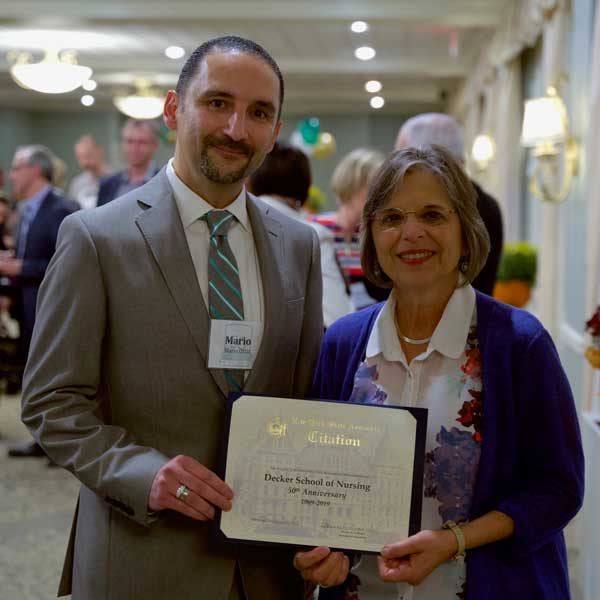 “This event is an opportunity to reflect on the many contributions the Decker School has made to the health and happiness of the University and the community,” said Binghamton University President Harvey Stenger during his remarks at the luncheon. “And of course, it is also an opportunity to recognize the contributions the community has made to sustain the school as well.”

“Almost from the start, [the Decker Foundation] saw the vital role that our School of Nursing would play in supporting the vision for a healthy community, and over the years the foundation’s support for the school has been remarkable,” Stenger said. 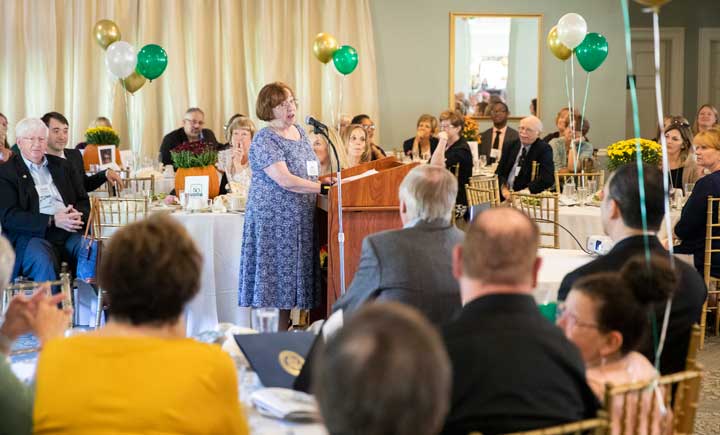 Gale Spencer is the only Distinguished Teaching Professor within Decker College of Nursing and Health Sciences. She started working at the School of Nursing just three years after it was established. Image Credit: Jonathan Cohen.
He also extended his gratitude to the school’s long-term partners and event sponsors — Lourdes Hospital, UHS and Guthrie.

The next speaker, Donald Nieman, Binghamton University provost and executive vice president for academic affairs, said the establishment of the University’s School of Nursing and School of Management, both of which occurred in 1969, “was the first step of our expansion into a full-fledged university, which is incredibly important in our evolution.”

He added, “With the development of the School of Nursing, Binghamton University began a path of engagement with the community and we have now become a significant partner within the community.”

Gale Spencer, who has been a faculty member at the Decker School for 47 years, provided a historical overview, presenting facts about the school’s former locations, deans and many achievements over five decades.

Motivational speaker, comedian, author and breast cancer survivor Diana Jordan then took the stage to present The Healing Power of Laughter—Nourishing the Nurse Within You. During her talk Jordan had the audience laughing, whistling and singing! 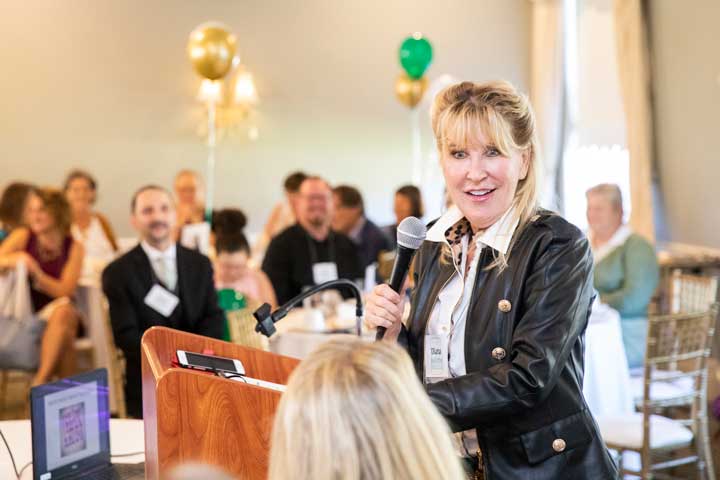 Motivational speaker and comedian Diana Jordan gave the keynote address at Decker's 50th Anniversary Luncheon. Image Credit: Jonathan Cohen.
“I don’t think I could have made it through my journey with cancer without laughter,” she said.

Jordan also encouraged the audience to always find the humor in life.

Ortiz closed the event with a brief presentation of the Decker School’s plans for the future, which include adopting a new name, Decker College of Nursing and Health Sciences. He said the new college will encompass the existing Decker School of Nursing as well as two schools being developed — the School of Applied Health Sciences and the School of Rehabilitation Sciences. The new schools will offer degree programs in the therapies and health sciences.

To provide space for the increased programs and people, Decker College will move to Binghamton University’s Health Sciences Campus in Johnson City, N.Y., in 2020.