Binghamton University women’s soccer defeats Wagner University 1-0, Sept. 12, 2019, at the Bearcats Sports Complex. The team was undefeated in five home games and 3-2-1 in away games at the time of this report. Image Credit: Jonathan Cohen. 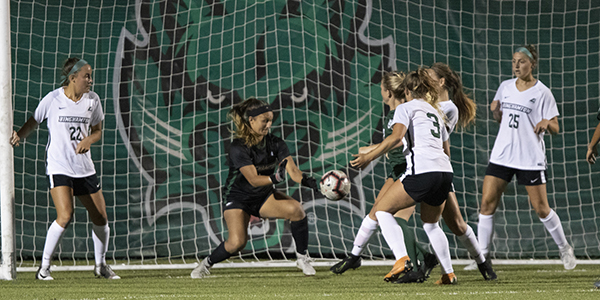 Binghamton University women’s soccer defeats Wagner University 1-0, Sept. 12, 2019, at the Bearcats Sports Complex. The team was undefeated in five home games and 3-2-1 in away games at the time of this report. Photography: Jonathan Cohen.

Much of a soccer team’s character is shaped in the spring, away from the glare of the public and the cameras. In the case of head coach Neel Bhattacharjee‘s Bearcats, the spring was pivotal not only to push a disappointing 2018 season behind them but also to establish stronger team chemistry. With both goals met, Bhattacharjee’s 2019 squad enters the season eyeing a return to the top of the America East standings, where it sat at the end of the 2017 campaign before missing the playoffs last fall.

The Binghamton men’s soccer team heads into the 2019 season with a burst of new energy. The Bearcats have added 12 newcomers and have four redshirt freshmen on their squad. With a core group of experienced returners, head coach Paul Marco is excited about what the upcoming season will bring.

The Binghamton Volleyball program enters the 2019 season with high hopes following a rare playoff absence in 2018. Nine of the team’s 15 members are underclassmen, who are looking to return the Bearcats to their winning ways of 2017. Head coach Glenn Kiriyama enters his 21st season at the helm, just two years removed from a conference runner up finish.

Binghamton men’s lacrosse coach Kevin McKeown has announced the addition of 12 players to the 2019-20 roster.

“I am pleased to finally welcome the class of 2023 along with two transfer student-athletes to Binghamton University,” McKeown said. “It is a group focused heavily on the offensive side of the ball. Our expectation is that they will raise the level of competition on a daily basis within our program. As we begin our fall season, I am eager to see them on the field.”

The Binghamton women’s basketball program has announced the hiring of Takima Keane as an assistant coach. She brings a wealth of NCAA Division I experience, both as a player and coach. Keane has been on the coaching staffs at both Canisius (2017-18) and Northern Illinois (2015-17). She was involved in all aspects of each program, including recruiting, player development and scouting. Keane has worked individually with both guards and post players.