This Erickson Air-Crane helicopter — named Bubba after a 2016 hurricane — lifted two 13,000-lb. chillers one at a time from an Events Center parking lot to the roof of Science 3 early the morning of Saturday, Sept. 28. Referred to by pilot Brad Warren as the Swiss Army knife of the helicopter world, the craft requires three pilots to fly it — two facing front and one facing back. Image Credit: Jonathan Cohen. 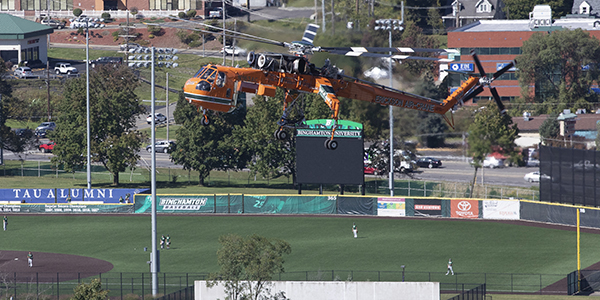 This Erickson Air-Crane helicopter — named Bubba after a 2016 hurricane — lifted two 13,000-lb. chillers one at a time from an Events Center parking lot to the roof of Science 3 early the morning of Saturday, Sept. 28. Referred to by pilot Brad Warren as the Swiss Army knife of the helicopter world, the craft requires three pilots to fly it — two facing front and one facing back. Photography: Jonathan Cohen.

Many improvements took place on campus during summer 2019. Several roads and parking lots received new pavement and safety upgrades including Bunn Hill Access Road, a portion of West Drive and lots M3 and M4. Repairs to a retaining wall and planters at the Fine Arts Building were completed. A major corridor in the Fine Arts Building was also renovated with new ceilings, lighting and paint. Lighting upgrades took place along East Access Road. The roof at Harpur’s Ferry was raised so that larger equipment can be accommodated. A new outdoor space was created with seating, lighting and landscaping outside the Engineering and Science Building at the Innovative Technologies Complex.

With fewer students on campus over the summer months, improvements also took place in residential halls. New flooring was installed in the suites and great room of Windham Hall at Mountainview College. At College-in-the-Woods, Mohawk Hall’s exterior was refurbished and painting took place around the windows of all the community’s buildings. Boilers and hot water tanks were replaced at Hempstead and Keuka halls in the Hillside Community. Doors, tubs and flooring were also replaced in several Hillside buildings.

A project that renovated the Campus Mail Services area in the University Union is complete. The project involved demolition of the existing space. New flooring, ceilings, lighting, counters, mailboxes and package unpacking counters are some of the improvements that were made to this space. A second project focusing on The Undergrounds student activity/entertainment spaces in the basement is underway. Renovation of the bowling, billiards, ping pong, Late Nite and other areas such as the Bike Repair Shop and Meal Plan Office will take place. Work will involve removing walls and installing glass storefront systems, new flooring, ceilings, lighting, restrooms and mechanical improvements. The project will create a more open, inviting space.

The Engineering Building has begun taking on a new look as a phased renovation of 66,000 square-feet of space continues. Work on installing new metal panels and windows will wrap up later this fall. Work on the first floor of the Lecture Hall, corridors and restrooms was completed over the summer. Work continues on laboratories. On the second floor, demolition is complete and wall framing is underway. The project also provides new offices, classrooms and restrooms throughout the facility. Upgrades are being made to mechanical, electrical and plumbing systems serving the building as well.

Exterior changes are also taking place at Science 2, including the tower where new windows are being installed. The physics wing is also being renovated. Demolition work was completed over the summer and wall framing and mechanical rough-in work has begun moving forward. The project will create new undergraduate laboratories, classrooms and restrooms. The building exterior will take on an updated look with new windows and exterior metal paneling that will greatly improve energy efficiency.

A helicopter was on campus in late September to place new chiller equipment on the roof of Science 3. The equipment will serve Science 2, 3 and 4, and the Science Library, and will provide backup for the Events Center.

Two major projects in the Hinman Community will begin later this fall. Cleveland Hall will be renovated. This project involves asbestos abatement and demolition and reconfiguration of all baths including six ADA-accessible suite baths. Flooring will be removed and replaced. All windows and glass storefronts will be replaced with energy efficient systems. New building insulation will also be installed along with a new roof. Elevators will be replaced. Rooms will be painted and new lighting installed. HVAC systems will be upgraded and will include air conditioning. Electrical and plumbing infrastructure will also be updated.

A second Hinman project involves a major renovation and addition to the Hinman Dining Hall. All interior spaces will be gutted and new interior space constructed. New electrical, plumbing and mechanical equipment will be installed. The addition will be three floors and will house a new lounge, restrooms, and program and retail space. The project involves a lot of site utility relocation that will impact the Hinman Quad and pedestrian paths in and around Hinman College.

Facade restoration on two sides of the building has been completed. Window frames are arriving and being installed. Masonry work for the additions is nearly complete. Metal framing inside is well underway, along with mechanical, electrical and plumbing infrastructure work.

Work was completed in the basement of the School of Pharmacy and Pharmaceutical Sciences to create facilities for University Police, Environmental Health and Safety, and Information Technology Services to serve the Health Sciences Campus. Work included construction of offices, conference space and a data center; locker and shower facilities for University Police; and other support space.