M. Stanley Whittingham speaks to a crowd via video news conference from a scientific meeting in Germany

Distinguished Professor M. Stanley Whittingham speaks by video conference to a crowd gathered at the Smart Energy Building about his Nobel Prize in Chemistry. Whittingham was at a scientific meeting in Germany when the prize was announced. Image Credit: Jonathan Cohen. 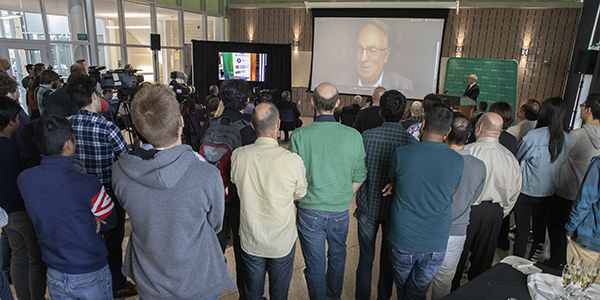 Distinguished Professor M. Stanley Whittingham speaks by video conference to a crowd gathered at the Smart Energy Building about his Nobel Prize in Chemistry. Whittingham was at a scientific meeting in Germany when the prize was announced. Photography: Jonathan Cohen.
By Katie Ellis

The Fountain Room at the Smart Energy Building was packed Wednesday afternoon, as members of the campus community and media waited for the man of the hour to appear via video conferencing from Germany. Binghamton University Distinguished Professor of Chemistry and Materials Science M. Stanley Whittingham had been announced early that morning as one of three recipients of the 2019 Nobel Prize in Chemistry for their work developing lithium-ion batteries that today power everything from smartphones to electric cars.

Whittingham received the honor with John Goodenough from the University of Texas at Austin and Akira Yoshino of the Asahi Kasei Corporation in Japan.

He received a standing ovation when he came on screen and admitted that he had been inundated by reporters and photographers all day. “And just a few hundred texts and emails,” he added, including many that came from past undergraduate students at Binghamton.

“It was a complete surprise until someone walked over to me and said, ‘There’s a phone call from Stockholm,’” Whittingham said. “It’s recognition for the three of us, but also for the entire field. It will raise the profile of energy storage and send the message that we can have a cleaner and nicer world, and perhaps start to solve the climate problem.”

Binghamton University President Harvey Stenger, who presided over the video news conference, called the announcement a remarkable honor. “All of us at Binghamton have been rooting for this day for several years — at least since 2015, when Stan was named a Thomson Reuters Citation Laureate,” Stenger said. “But, of course, those who knew his work reckoned this day was inevitable.”

Stenger commended Whittingham for his prolific work in the laboratory, but also for being an exceptional mentor to hundreds of students since his arrival at Binghamton in 1988. “His students love him,” Stenger said. “They say he teaches them how to be scientists, with one eye on basic research and the other searching for unique ways to apply this knowledge. This is the best kind of science — when people like Stan take an idea and develop it into technologies that change the world.”

Calling it “a wonderful day,” Executive Vice President for Academic Affairs and Provost Donald Nieman said Whittingham richly deserves the recognition for “his work as a scientist and the impact he’s had on our world.

“All of his colleagues will agree with me,” Nieman said. “He is a great scientist, but a wonderful human being, unassuming, and a wonderful collaborator.”

And Whittingham works with students at all levels, Nieman added. “Stan has been a leader in our smart energy First-year Immersion program [that provides new students with authentic research experiences in the sciences and engineering]. Our students gain the benefit of his wisdom, insight and techniques.”

Whittingham’s work truly has changed the world, Stenger said. “Without it, the computers we use today, the telephones and earbuds we use to talk and listen to one another, even the cars we drive to work each day — none of this would be possible. Today, thanks to Stan, we have energy at our fingertips, pretty much wherever we are.”

Whittingham, also director of the federally funded Northeast Center for Chemical Energy Storage, said he and his co-winners have never worked directly with each other, but individually made fundamental contributions to the development of lithium-ion batteries. And he has great hope for the future of battery research.

“We want to double the energy density of the present cells, and cut the cost by another 50%,” he said. “The goal is to make batteries last longer, store more energy and cost less.

“Good lithium batteries will last for a very, very long time and will certainly help sustainability research,” Whittingham said. “Lithium-ion batteries can make for a much cleaner and sustainable environment.

“I never dreamed [lithium-ion battery use] would be as broad as it is today,” Whittingham said. “I hoped it would grow, but never envisioned it would grow this far. I still remember carrying around a phone as big as a suitcase.”

He is currently working on two large projects with a goal “still to make batteries better at lower cost, and that are more reliable and safer.”

He and fellow researchers at Binghamton do fundamental research with funding from the state and SUNY that has enabled a pilot facility on campus where batteries can actually be made and tested in realistic settings. And with two large grants — a fundamental one and an applied one — “I don’t plan to retire yet!” he said.

“It’s a very good feeling that one’s research actually came out with something and it’s not just in the wastebasket or in publications,” Whittingham said, adding that “99.9% of all humanity has at least one lithium battery [in smartphones, etc.] and many have many more.

“I think there’s no question that this will make more people know of Binghamton University and make them look up where Binghamton is,” Whittingham said. “People will become much more aware of us and this will just help us grow. It’s very good for the University and the locality and always good for getting more funding from the federal government. This recognition will raise the profile of energy storage for governments around the world.”

“This is the highlight of long and rewarding career for Stan that last year saw him named to the National Academy of Engineering,” Stenger said. “But perhaps the most important is that he is making us extraordinarily proud not just here in Binghamton, but across the world. It’s better than winning the NCAA basketball championship.”