The Theatre Department's production of "The Wolves," a play examining the lives of girls on a high school soccer team, runs through Oct. 28 in Studio A Theater. Image Credit: Jonathan Cohen. 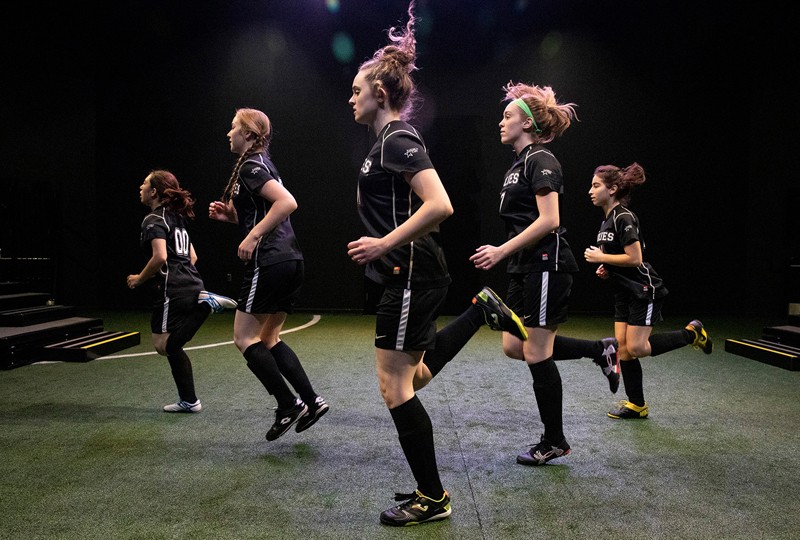 The Theatre Department's production of "The Wolves," a play examining the lives of girls on a high school soccer team, runs through Oct. 28 in Studio A Theater. Photography: Jonathan Cohen.
By Katy Wong

When performing on stage, actors are expected to master both body language and speech to effectively deliver the play’s storyline. For the cast members of “The Wolves,” the Theatre Department’s first Mainstage production of the fall semester, soccer skills are an added necessity.

“The first few weeks of rehearsals were split up into learning how to play soccer and another focusing on the text,” said cast member Allison Kujawa, a sophomore double-majoring in psychology and theatre. “For a while, we were running out onto the soccer field and having a full practice, and then running back into Studio A to work on the show. Eventually those two things collided, and now we’re doing them all at once.”

The coming-of-age play navigates the lives and challenges of a girls’ high school soccer team, with relevant topics ranging from immigration and human rights issues to periods and relationship drama. Each conversation between teammates takes place during the team’s warm-ups before each game.

For Kujawa, these conversations between teammates — coupled with the strong focus on soccer — make the storyline even more effective than a dialogue-only play.

“The show represents teenage girls, and even college-aged girls, in our time period,” Kujawa said. “I like the juxtaposition between the conflict going on in their lives and soccer, which for them is very important.”

Director Anne Brady, a professor of theatre, said that managing the play helped her realize that there are many similarities between actual athletes and cast members of a stage production.

Cast member Kirsten Whistle, a senior majoring in theatre, added that the hours-long rehearsals connected the students and forced them to work together as a team.

“The best part about being in the play is feeling like you’re part of a team,” Whistle said. “My favorite part about playing sports is the camaraderie between the players, and it’s the same thing in rehearsal. You’re not only getting to know people as their characters on the stage, but you’re also getting to know them in real life.”

“I also love the fact that we’re all women actors, all working in the school together,” Kujawa said. “It feels like we’re a really strong unit, and it’s been one of the most enjoyable processes I’ve had to go through with them.”

To cast member Catherine Calidonna, a senior majoring in political science, working on “The Wolves” is also closely similar to working in a musical production because of its demand of physicality and speech.

“If you think about actually watching a musical, there are people dancing and singing at the same time, which is a very difficult technique for actors,” Calidonna said. “In a play, we don’t sing, but we’re singing with our bodies. You have to work on physicality and on voice and project when you’re on stage. There’s an added part of playing a sport, so it’s kind of similar to a musical where you have to know how to sing and dance at the same time. We have to know how to speak at the same time while still telling the story of the show.”

Studio A provides an intimate setting for not only the cast members, but also the audience members.

“You get glimpses into the girls’ lives. It’s as if you’re sitting right next to them and peeking in on their conversations,” Brady said. “One of the great things about the theater is that you can be a foot from the actors, so it’s not like they’re far away from you. You’re right there with them playing soccer or confiding in another teammate.”

Calidonna hopes that the smaller setting of the theater will allow the audience to feel a close bond to the characters.

“The audience will literally see the sweat on our foreheads. It really is an intimate show,” Calidonna said. “It may not seem like that at first, but by the end, I’m sure every member of the audience will feel a connection to the characters.”