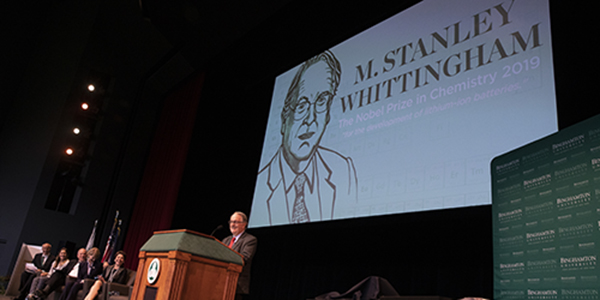 Distinguished Professor M. Stanley Whittingham, who has called Binghamton University his home since 1988, was introduced as the man of the hour, day, week, month, decade — and two centuries — at the Oct. 18 celebration of his winning the 2019 Nobel Prize in Chemistry.

More than 1,200 attended the ceremony and reception, held in the Anderson Center for the Performing Arts Osterhout Concert Theater and hosted by Binghamton University President Harvey Stenger. SUNY Board of Trustees Chairman Merryl Tisch, SUNY Chancellor Kristina Johnson and Binghamton University Student Association President Emma Ross made remarks, as did Whittingham, a distinguished professor of chemistry and materials science and the University’s first Nobel laureate.

Here, we tell the story in (mostly) pictures. 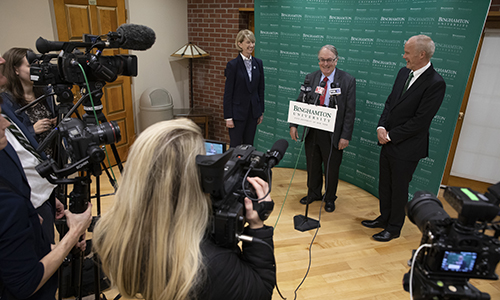 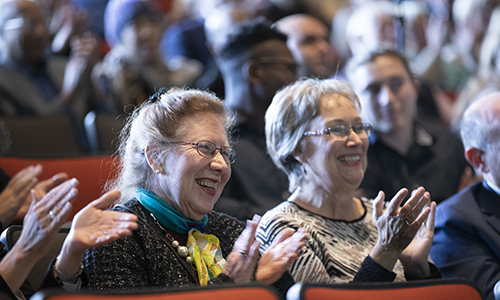 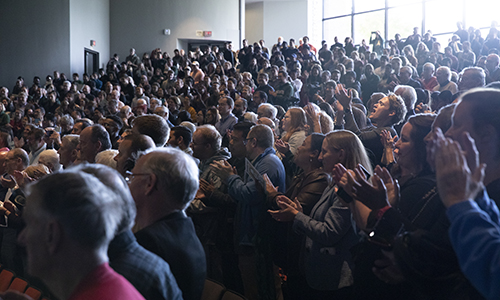 A standing ovation and thunderous applause from a standing-room only crowd greet Whittingham as he enters the theater. Image Credit: Jonathan Cohen. 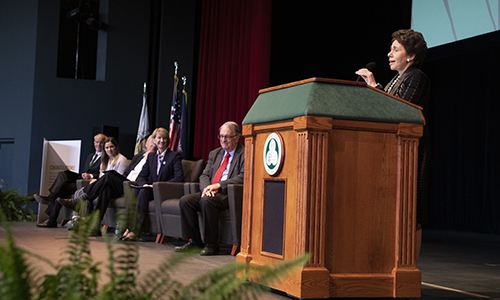 SUNY Board of Trustees Chairman Merryl Tisch took the podium, remarking at what an exceptional moment we find ourselves in, all based on the scholarship of a humble, decent man. She then summarized a special citation from Gov. Andrew Cuomo that honored Whittingham for his extraordinary contributions to science and cleaner energy. Image Credit: Jonathan Cohen. 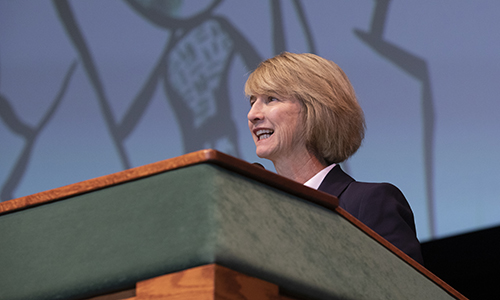 SUNY Chancellor Kristina Johnson kiddingly tells a story about calling Whittingham to congratulate him, but barely getting the words out and hanging up quickly because she was too choked up to speak. "Unfortunately, with caller ID, he knew who it was!" Image Credit: Jonathan Cohen.

I am so happy that what is arguably the single most important invention of our lifetimes is being fully celebrated: lightweight, rechargeable lithium-ion batteries that not only power our nifty cellphones — but also represent the best shot we have in addressing the onslaught of climate chaos, allowing for cars that don’t require fossil fuels to run, and for the storage of zero-carbon, renewable energy from solar and wind power.

So Stan, you have my deepest gratitude for heaping glory on the State University of New York — and for saving civilization while you were at it. 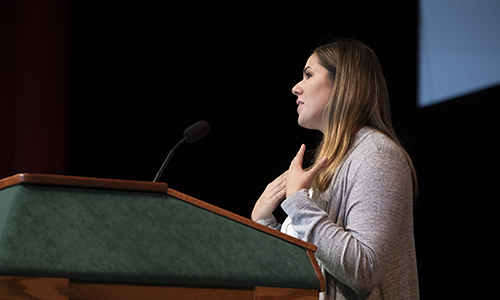 From cell phones to electric cars, the very fabric of the world we live in is forever altered by the work Professor Whittingham has done. I’m sure, once and a while, he regrets this incredible discovery when he realizes that he made it possible for students to text during his lectures!

For so many students here at Binghamton the work you do is a beacon of light, reminding us that there is always hope and that there are people who are hard at work to make our world a better place.

Professor Whittingham, winning the Nobel Prize shows the world what we at Binghamton already know: that our professors are some of the greatest minds the world has to offer. That receiving an education here at Binghamton is a privilege. It proves that we are one of the best universities to learn and study at and that when you receive an education at Binghamton, your learning goes far beyond the classroom. Here you have the opportunity not only to learn from incredible professors, but to work and research alongside them as well.

Most importantly however, this shows Binghamton students that anyone can change the world. It shows us that our ideas have power and it gives us faith in our abilities and what we are capable of. Professor Whittingham embodies the drive, passion and commitment that is necessary to achieve something great. Thank you Professor for inspiring us, your impact at this school goes far beyond your department. Thank you for giving every student here one more reason to be proud to call Binghamton our home. 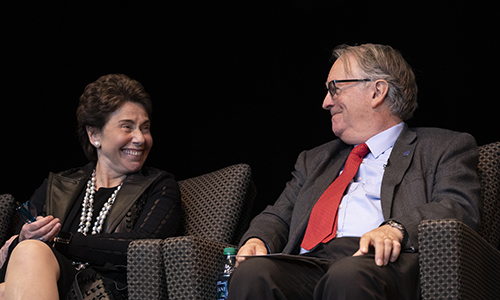 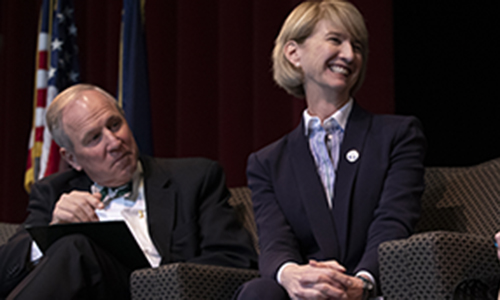 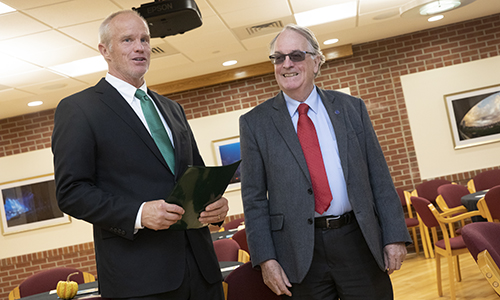 President Stenger and Whittingham prior to walking onto the stage. Image Credit: Jonathan Cohen.

Stan came to Binghamton 31 years ago in 1988 and by then he was already a superstar among engineering wonks — as the founder of rechargeable lithium-ion battery technology during his work at Exxon Research and Engineering.

By the time he came to Binghamton, he was already someone who had helped change the world — revolutionizing the way we store and use energy, with all of the commercial and industrial applications that entails.

So his coming to Binghamton was exciting news back then — and he certainly has lived up to his potential!

At Binghamton, he’s helped build the University into, if you’ll pardon the pun, a powerhouse of battery and alternative energy research.

In the classroom, he’s regarded as a remarkable teacher, helping mentor hundreds of students into careers in academia and industry.

His students love him — they say he teaches them how to be scientists, with one eye on the basic research and the other eye open for unique ways to apply this knowledge. 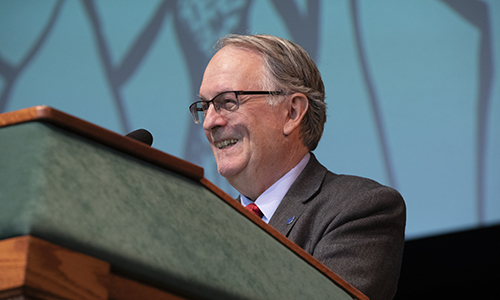 Joking that everyone should know by now that he’s not a native American, Whittingham said he’s been an American longer than his students and spoke of his brilliant teachers – two in particular – who “hooked” him on science at a young age.

Growing up in England, his studies focused on math, chemistry and physics until he was accepted into Oxford, he said, but he was required to know Latin and to pass two other languages.

“Please keep languages on your screen and keep my wife (a Spanish professor at SUNY Oswego) happy as well!”

After earning his doctorate and gaining research experience at Oxford, he wanted “to go somewhere where the sun shines,” he said, so chose Stanford University in sunny California, where he added to his research training as a postdoctoral fellow.

Stanford was where he met his wife, Georgina. “We didn’t waste any time,” he said, “and in nine months we were married.

“Those were exciting times, Sputnik was a real issue so we had funding agencies coming to us saying ‘Write a grant and we’ll give you money!” 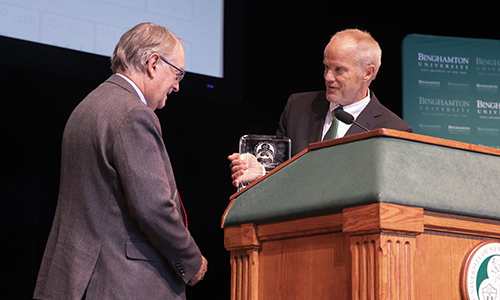 He was hired by Exxon (and turned down an offer from Cornell), and spent the next 16 years in what he termed were “the great days of American industry” where it was easier to “do” basic research than it was a universities.

It was at Exxon that he came up with the idea for lithium-ion batteries — and he was appointed division director of chemical engineering.

“I said I don’t think I like management and want to go back to academia, and I came here,” he said. “I chose Binghamton because I could interact across all of the departments and that’s not the case at most universities.”

And within a week of coming to Binghamton, he recalled being told he was the director of the new Institute for Materials Research — and that was just the beginning. He served as department chair and as vice president for research for five years.

“It was a great job back then,” he said. “I spent 60% of my time as vice president and the other 40% of my time doing my own research, but those were good times when were just beginning to turn around research here,” he said

When he left that the vice president position he helped develop a full program in materials science and engineering, given the interest level shown by students. “That’s a thriving program,” he said.

He’s had National Science Foundation funding for more than two dozen years, and Department of Energy funding since 1993.

I’m hoping this prize will raise the level of interest in energy storage and make it possible for this country to manufacture batteries and we’ll have a real business going here!” he said.

But his final message wasn’t about his story or funding or batteries. It was a message for students:

“Do what interests you, not what will make you money or you will be unhappy. Be willing to take risks and enjoy yourself in whatever you do.” 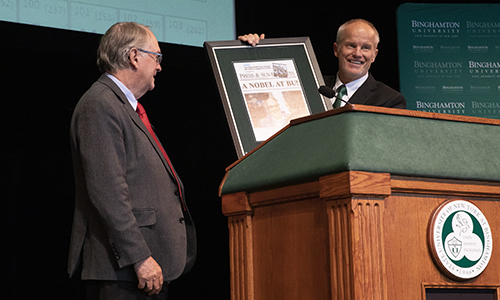 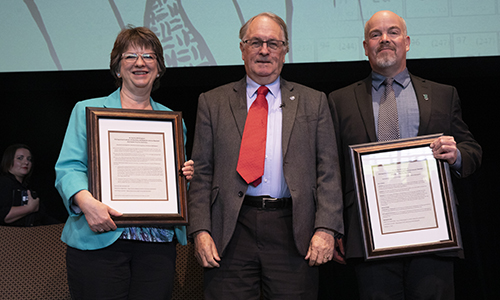 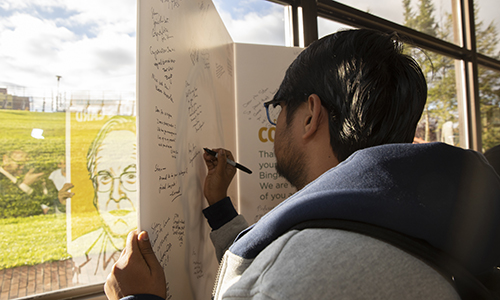