Alumnus returns to Binghamton University to discuss struggles and success 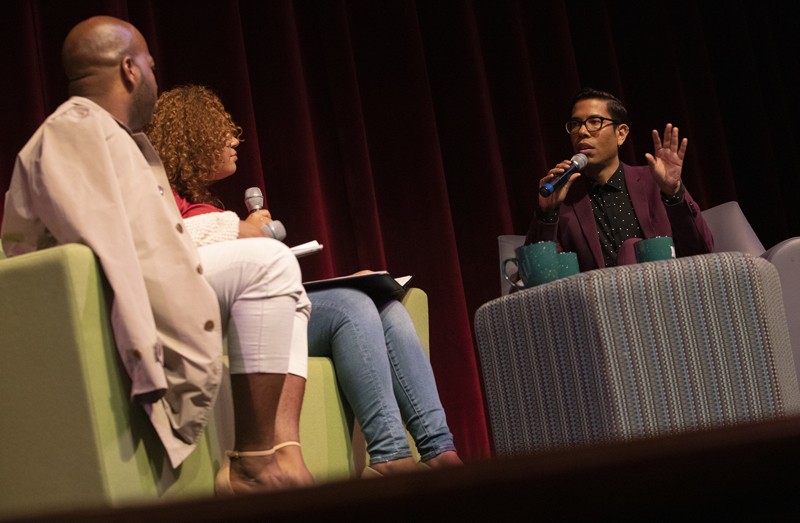 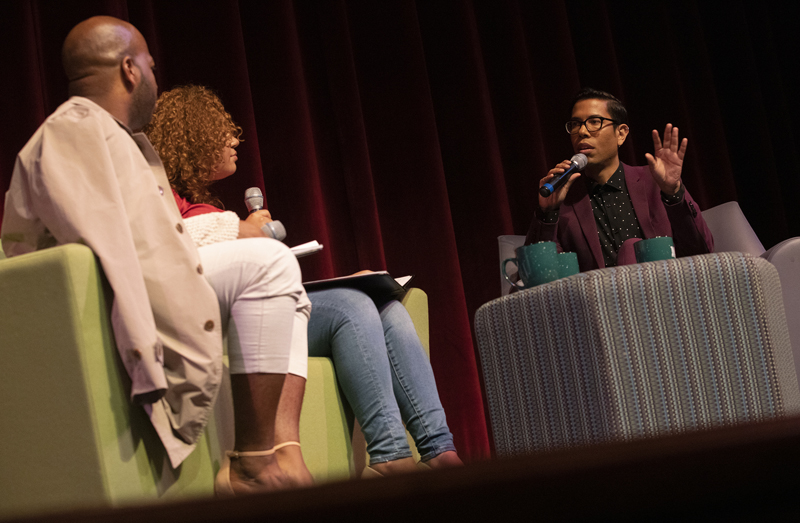 Steven Canals, right, takes part in a discussion about his time at Binghamton University and his role in the creation of the hit television show "Pose." Image Credit: Jonathan Cohen.
By Ethan Knox

Looking back at what he’s done in the last decade of his career, Steven Canals ’05, MA ’08, reflected on hundreds of rejections and the history that brought him to where he is today.

“It was tough, but why did I persist and keep pushing forward? I didn’t feel I had the luxury to stop,” Canals said. “I think that for me, especially growing up in a family that was mixed, that was both black and Puerto Rican, I have a really strong understanding of heritage and our roots. And my sense was that my forebearers were brought here, and once they were here, many had to walk hundreds of miles in threadbare shoes, some in no shoes at all, with bloody soles. They didn’t quit, they persisted. I exist in the shadows of their sacrifices.

“My feeling was ‘I can’t sit back and say I have to quit because I’m tired and being told no.’”

On Oct. 24, Campus Activities and the University Union, along with the Multicultural Resource Center and the Q Center, hosted a moderated discussion at the Anderson Center’s Chamber Hall with Canals, the co-creator of the television show Pose on FX.

Pose tells the story of the 1980s and 1990s New York City ballroom culture scene, where LGBTQ+ and gender non-conforming people, usually African American and Latino, would compete in distinct “houses,” or chosen families, for prizes and renown. The series specifically follows a cast of queer and transgender characters from two warring houses and their battles with the HIV/AIDS epidemic.

The show, which recently completed its second season, has been nominated for several awards, including Golden Globes and Emmys. Pose has been renewed for its third season.

Canals, who is also the co-executive producer and writer of the series, earned his bachelor’s degree in cinema in 2005 and continued on to earn his master’s degree in 2008. He then moved on to the University of California, Los Angeles, where, in 2015, he earned a second master’s degree in a screenwriting program.

While he had an interest in film from an early age, Canals didn’t always have the confidence to tell the stories he wanted. When he was at Binghamton, working as a resident assistant, he struggled with finding his place and doing what made him happiest.

“I remember coming to Binghamton, and very specifically feeling like I don’t want people to see POC. I don’t want them to see LGBT. I just wanted people to see Steven,” Canals said. “I felt like a fraud, because I had parents who were sending their students to this institution, and I am on the front line, serving as a mentor, a counselor, a surrogate parent, an auntie — and telling them how to live their best life. And I wasn’t living my best life. I just felt like ‘I am doing these students such a disservice.’ Telling you, ‘Here’s how to go out and navigate the world in a way that would be helpful to you,’ when I myself have never taken my own advice.”

Eventually, though, Canals went out into the world and learned to trust his own skill and ability. Selling the story of Pose, however, was its own kind of new challenge and a trial in itself. He was rejected around 150 times.

“I have to do the labor of going into rooms where I was sitting in front of primarily white, straight cis[gender] men. I was having to first educate — because most folks have no understanding of what ballroom is,” Canals said. “First, I have to educate you on what it means to be a person of color, and what it means to be an intersectional person of color, so to also be queer or trans. I have to talk about what it means to be part of ballroom and the safety that ballroom creates for these young, queer, trans people who have often been rejected by their families, by governments. And now we can talk about story.”

Canals was finally able to tell the story of Pose after meeting Ryan Murphy, the creator of a number of successful television shows such as Glee, American Horror Story and American Crime Story. This is the story that is available for all to enjoy today.

Michael Kuhl, a junior studying human development, attended the event and said he was inspired by the work Canals does.

Sam Puerto, a Binghamton University alumnus, had tweeted Canals and was ultimately the one who connected Canals to the Q Center’s director. They were excited to see Canals on campus and give him the opportunity to meet successful LGBTQ+ people of color from the University.

“[Canals] coming here was a dream realized,” Puerto said. “When I was here, [campus organization] SHADES was crumbling, completely. I got to listen to the president of SHADES say today how the organization has basically been rebuilt. It’s huge and booming and I’m so glad because I didn’t get to see that. Canals being here was why I wanted him to come back — to show all the queer people of color: ‘There are people who’ve walked through the same halls as you, and they’re doing amazing things and they don’t have to hide their queerness. They don’t have to hide behind anything.’”

As he looks back at his time at Binghamton University, Canals is happy to see that some students are already living the proud, active roles he wasn’t always comfortable with. He urged students to go out and find their “tribe” — the people “who are shouting the exact same message” — and “hold them close” with love and support. But, he said, the work is far from over. While Pose hires around 150 LGBTQ+ people in various roles and has five transgender women as series regulars, that is not yet standard practice.

Even with all the adversity he has faced, Canals said he is proud of what he does and hopes to continue creating content like Pose.

At the conclusion of his conversation and the question-and-answer portion of the night, Canals used his experiences as an RA, a student whose volume was “turned down” and his current role in television as sources for advice directed to every student in the room.

“There’s no rulebook on how to navigate life,” Canals said. “There’s this rush to hit all the markers that culturally we’re told we’re supposed to: go to college and graduate, find a job, find an apartment, get married and have a kid. And somehow along the line you forget that you’re also supposed to live a life. What’s so important to me is that you go out there and you experience the world. Run a marathon, fall down, fall in love, have your heart broken. Do all the things that are just human, and then come back to it, because it’ll give you so much more to pull from.”