Bennett Doughty, left, William Eggleston and Ann Fronzcek collaborated on a proposal that received $50,000 in funding to assess the impact of a provider-to-provider telehealth model on patient care in a rural emergency department after non-fatal opioid overdoses. Image Credit: Jonathan Cohen. 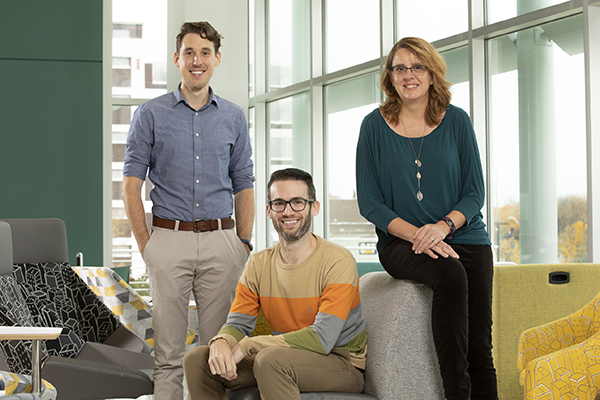 Bennett Doughty, left, William Eggleston and Ann Fronzcek collaborated on a proposal that received $50,000 in funding to assess the impact of a provider-to-provider telehealth model on patient care in a rural emergency department after non-fatal opioid overdoses. Photography: Jonathan Cohen.
By Katie Ellis

A new process coordinated by SUNY to generate ideas that can be developed into grant proposals wrapped up successfully earlier this year at Binghamton University, resulting in $50,000 in funding for a study to assess the impact of a telehealth model on improving hospital care for patients with opioid use disorder being treated in rural areas.

The SUNY Germination Space program, part of a broader National Science Foundation effort, brought together 11 selected Binghamton faculty from across disciplines this past spring for three workshops with a goal of generating collaborative ideas addressing opioid use disorder (OUD).

The SUNY Germination Space is part of the broader National Science Foundation Germination initiative that seeks to stimulate researchers from across the academic spectrum to germinate transformative research ideas and questions to open large opportunities that address important societal needs. The SUNY Germination Space is an experimental program within that framework dedicated to exploring methods for generating transformative research questions, in this case in relation to the current opioid crisis. It has previously conducted programs at the University at Buffalo on the topic of artificial intelligence and at Stony Brook University on the topic of engineering-driven medicine.

The collaborative process, held on campus, led the participating faculty through brainstorming and discussion sessions that funneled those with similar interests into groups, each one developing a proposal to submit for $50,000 in seed funding, provided by Binghamton University.

Three groups were ultimately formed, and three proposals were developed, with one selected to move forward with funding: “Assessing the impact of a provider-to-provider telehealth model on patient care in a rural emergency department after non-fatal opioid overdose.”

The study is being led by School of Pharmacy and Pharmaceutical Sciences faculty William Eggleston and Bennett Doughty, with the Decker School of Nursing’s Ann Fronczek and Nasim Sabounchi, formerly of the Department of Systems Science and Industrial Engineering, but now a research associate professor at the CUNY Graduate School of Public Health and Health Policy.

“Everyone came into the first workshop with their own background, and when we started we weren’t grouped by interests, we were just introduced to the process,” said Eggleston, a clinical assistant professor of pharmacy practice. “It took the first workshop to get to know our big ideas and how we might want to address the opioid epidemic and get peer feedback.”

The first workshop was set up to brainstorm ideas and hear from the larger group, get feedback then formulate and adjust ideas in real time, and, as the day progressed, Eggleston said, “it became clearer and clearer where there were similarities” among the faculty. From there, the three groups formed organically, he said, resulting in a nice mix of disciplines in each group.

Part of the germination space project is to say, ‘Let’s give you more resources (people and experts, a little money) and you come up with a big idea that changes the whole concept of how we do things. Our project is an opportunity to do that — to change how patients receive this care in rural hospitals.

Eggleston and the colleagues in his group agreed that the process was unlike any they had gone through before to develop a grant proposal.

“This was a different way of operating in that, when trying to come up with a research area you generally confine yourself to, ‘What can I do? What skills do I have?’ and it’s easier said than done to find collaborators to bring ideas to next level. Instead, the germination space allowed that to happen naturally,” Eggleston said. “The project we ended up with was an idea that all of us [in our group] had had at one point, but hadn’t explored because we were lacking big pieces of the puzzle. I don’t think I would have independently pursued this project if we hadn’t had the opportunity to work in the space.”

“It was very different for me,” said Fronczek, an assistant professor of nursing. “There was a learning curve, but the workshops were framed with questions and we solidified into three teams. I was hesitant at first because I don’t have a background in opioids, but it was an opportunity for additional funding that was interdisciplinary and could incorporate telehealth.”

“Getting feedback from the entire group was interesting,” said Doughty, a clinical assistant professor of pharmacy practice. “The questions and suggestions the faculty posed helped us navigate through our ideas and thoughts. This was especially helpful because participants came from multiple departments throughout Binghamton University, offering multiple perspectives that aided us in narrowing down our thoughts,” he said. “The project taught us a unique way of working through an idea from the initial brainstorming to the final grant application.”

In the end, Fronczek said the germination space resulted in three very different project proposals. “They were all solid ideas and the other proposals will still move forward regardless of funding because they’re such good ideas,” she said.

The funded project is already moving forward. The researchers have developed a needs assessment survey to better understand any barriers in the region’s rural areas related to the prescribing and openness of using telehealth technology.

“We’re looking at how can we better provide patients who have an OUD with the best evidence-based treatments at rural hospitals,” Eggleston. “We know there are drugs that reduce deaths in patients with OUD. But we also know that most patients don’t get these drugs, primarily due to limited access to treatment.”

“Overdose treatments and care are more readily available in urban areas,” Doughty said. “But in rural areas, it’s often even harder to find a primary care provider or someone with prescriptive authority. Patients are undertreated, and it’s a more pressing problem in rural areas compared to urban areas.”

In fact, Doughty added, “Out of 10 people with OUD across the US, only about two are receiving treatment. With this deficit felt more in rural areas, an intervention is very much needed.”

“It’s a combination of providers who are less comfortable with using these medications, pharmacies that don’t always have these medications and the need for special licensing to prescribe the medication,” Eggleston added. The medication the project will use is one that has been effective in reducing overdose deaths and is affective for treating OUD — Buprenorphine, commonly known as Suboxone.

One of the highest risk times for overdoses is after a patient is discharged from a hospital after a previous overdose, Eggleston said. “If patients leave the emergency room and haven’t received these medications, they will continue to have withdrawal symptoms and cravings, so their odds of using an opioid again are high. We think that we can be doing more in the emergency departments and emergency medicine providers agree. Their hesitation is they feel they don’t have the comfort level or experience with the medications to prescribe them properly.”

Because access is easier in urban areas and hospitals where there are addiction medicine providers, the project will use telehealth to connect rural emergency room physicians to those who can assist them in prescribing medications for non-fatal opioid overdose patients upon their discharge.

“On a small scale, we are going to look at developing a provider telehealth model where rural doctors will have access to a substance abuse specialist to increase their comfort level in how to prescribe and use medicated-assisted therapy,” said Fronczek.

After the needs accessibility survey has been completed this fall, phase 2 will be to pilot the telehealth program in spring 2020. “Working with local health care providers and a limited number of emergency medicine providers, we will try to see if the end product works,” said Eggleston. “Can providers use it, is it increasing their comfort level using these medications?”

“The idea behind this initial seed funding is for us to have the support we need to develop pilot data and, when we go for more funding, we can show how and why our aims will be successful,” Doughty said. “We hope to use this project to create a scalable model that could be applied nationwide.”