Musical theater takes a turn in the spotlight

Gabriel Pinciotti and Brenda Darcy star in the Theatre Department's production of the musical "A Man of No Importance." It is one of two musicals on the 2019-20 Mainstage schedule. Image Credit: Jonathan Cohen. 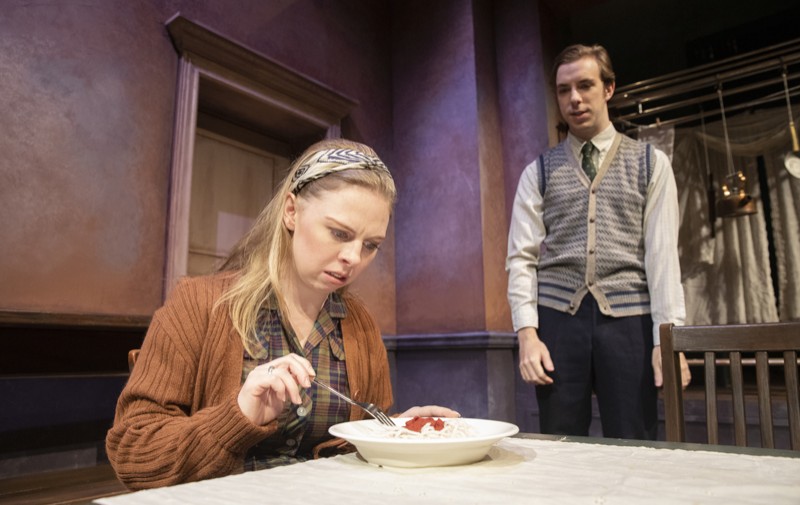 Gabriel Pinciotti and Brenda Darcy star in the Theatre Department's production of the musical "A Man of No Importance." It is one of two musicals on the 2019-20 Mainstage schedule. Photography: Jonathan Cohen.
By Eric Coker

Attending the Theatre Department’s musical version of “The Wizard of Oz” as a high school student was an eye-opening experience for Sarah Wallikas.

“When I first thought of Binghamton University, it was business and science — not a place that a wacky arts kids like me would end up,” said the sophomore from Endwell, N.Y. “I can remember coming to see Tommy Iafrate’s production of ‘The Wizard of Oz.’ I had lived (locally) and didn’t necessarily know this existed and was available to me. Seeing that show and how much the department has to offer got the ball rolling for me. It made me feel comfortable deciding to come here.”

Two years later, Wallikas is one of many students showcasing their skills in a growing musical-theater program. The Theatre Department not only has a musical-theater director in Iafrate, but it has also added courses and faculty members such as choreographer/director David Wynen and music director Robyn Womersley.

“Musical theater is a marketable skill to have if you are a performer in the real world,” said Iafrate, who joined the faculty in 2015. “It’s something this department wants to prepare students for.”

That preparation will soon likely include a major in the subject, as the department is awaiting approval from SUNY to offer a bachelor of fine arts degree in musical theater.

The Theatre Department is shining a spotlight on musical theater this academic year. For the first time in a decade, two musicals – “A Man of No Importance” and “Sweet Charity”— are part of the four-show Mainstage schedule.

The Theatre Department sought to do a more contemporary musical this fall, said Iafrate, who added that past shows such as “Guys and Dolls” and “Bells are Ringing” were traditional productions that featured “lots of dancing and singing and jazz hands.”

Enter “A Man of No Importance.” The show, based on the 1994 film of the same name, was written by Terrence McNally with music by Stephen Flaherty and lyrics by Lynn Ahrens. It tells the story of a Dublin theater group led by Alfie Byrne (played by Binghamton University senior Gabriel Pinciotti). Alfie’s life changes when he attempts to stage a production of Oscar Wilde’s “Salome” at a local church. 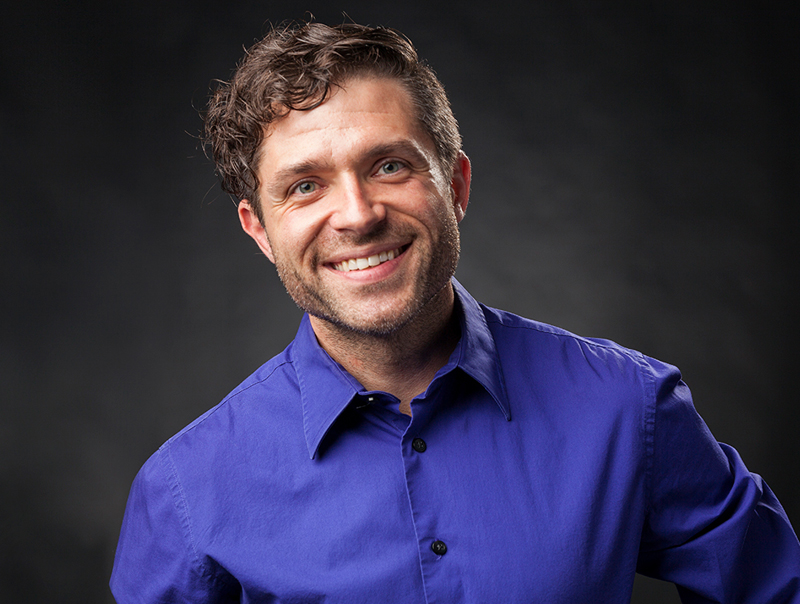 Tommy Iafrate, musical theater director and assistant professor at Binghamton University, is a stage director, music director and musician who has toured around the world and taught in China. Image Credit: Marcus Newton.

“The characters are from a musical-theater community and don’t have the razzle-dazzle and the shine of traditional musical theatre,” said Iafrate, who is directing the show. “It’s a story that’s much more invested in heart and character and exploring what it means to be an ordinary, everyday person — and how the arts and theater still impact those who aren’t obsessed with theater.”

“It fits well with the talents of our student body and what we’ve done in the past,” he said.

Musical theater is thriving today — and it goes beyond Broadway productions and national-touring shows, Iafrate said.

“There are opportunities on cruise ships, theme parks and other places that demand the skills of musical-theater performers,” he said, “even if the dancers are lip-syncing to a track or if singers get to park and bark while people dance around them. It still requires a musical-theater ‘vocabulary’ and knowledge to execute clearly and cleanly while story-telling.” 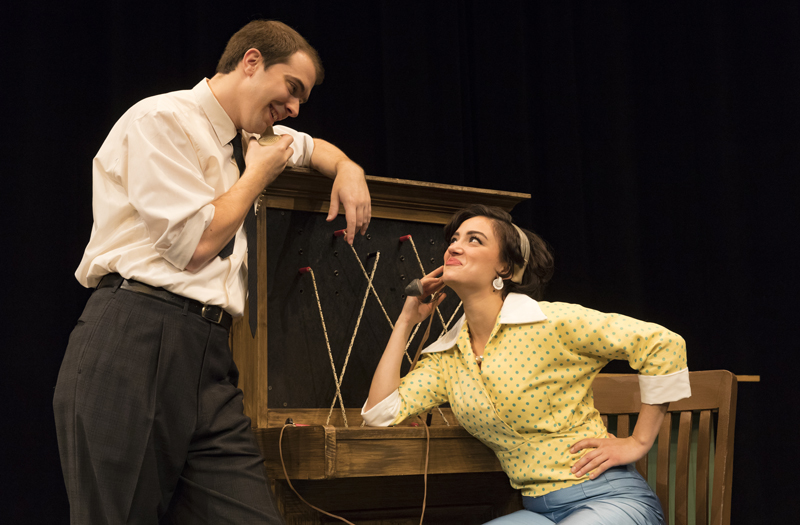 "Bells are Ringing" was a musical featured on the Watters Theater stage in the fall of 2016. Image Credit: Jonathan Cohen.

Gabriel Pinciotti, Christine Skorupa, Sarah Wallikas and Andrew Ajaka all have extensive experiences on the stage at Binghamton University. But all four said their favorite musical-theater moments aren’t about something specific under the lights. Instead, they highlight a sense of community.

Pinciotti: “’Bells are Ringing’ my freshman year was not only an introduction to the Theatre Department world, but also the people. We had a family-like cast. Everyone supported each other. I thought: ‘I definitely belong here. Absolutely.’ It was the great opening to my time here.”

Skorupa: “’Bells’ was one of my highlights, too. I didn’t know what the musical-theater program was like. I knew my community theater was a family, but I didn’t think it would be that way in college. Working on that show — even though I was small and scared — I learned so much because everyone welcomed me with open arms.”

Ajaka: “One of my favorite experiences was the callbacks for ‘Guys and Dolls.’ I got to spend a lot of time with people in the department who cared about those around them. I was a shy freshman afraid of talking who got greeted by people like Christine and Aaron Penzel. They got me excited to be a part of this community that has been built in the department.”

Wallikas: “My first show was the studio musical ‘Ordinary Days’ last semester. I joke and say: ‘That’s it. I peaked my freshman year.’ It was a phenomenal experience with only four of us in the show. We got to know each other so well. We took a cast field trip to New York City to go to the Met, a setting emphasized in the show. … We got a feel for the world of the play that we were performing.”

As musical-theater opportunities have increased over the past two decades, academia has followed in emphasis. Binghamton University theatre students have noticed the growth.

Andrew Ajaka, a sophomore from Queens, didn’t start musical theater until late in his senior year of high school.

“I did a show for the first time and it changed the way I look at affecting the world,” he said. “I wanted to go somewhere that would give me the opportunity to explore that.”

Ajaka said he then watched clips from the Theatre Department’s 2015 production of “Spring Awakening” and a “one-minute major” video before deciding to attend the University and major in theatre.

While onstage experience is valuable, being able to take classes such as Iafrate’s Techniques of Musical Theatre is also vital to the theatre majors.

“It’s been one of my favorite classes,” said Christine Skorupa, a senior from Queens who has been featured in “The Wizard of Oz,” “Bells are Ringing” and “Guys and Dolls.” “Singing in musical theater is something that’s unique. You can take for granted that it’s just a pretty song, but Tommy teaches us to tell the story. You get movement, singing and acting in one class. It changed the way I view musical theater.”

For Ajaka, the class was memorable for its focus on the audition process and the importance of song selection.

“I came back the next semester with a new vigor toward auditioning and what I could get out of it,” he said.

The elements (and lessons) of musical theater

For the students, the keys to musical theater are more than excelling in acting, dancing and singing.

Wallikas agreed: “It’s important to have self-reflection and know how people can connect with your performance style. It’s about honing in on that and refining that. What sets you apart from others is what people will remember about you and what people will hire you for.”

Pinciotti, a senior from Cochecton in Sullivan County, reminded his colleagues that there are different kinds of jobs available for those with a musical-theater background.

“Even if you are good at only two of (acting, singing and dancing), you can still find musical theater that specializes in those things,” he said. “You have to know how to sell yourself: ‘This is what I’m good at. Come watch me do it.’”

All four students admitted that dancing is their most challenging aspect.

“Not only is it physically demanding, but training your body to move in a specific way is something that may require you to start earlier in life,” Ajaka said. “But we all give the good effort and learn as much as we can — even if we didn’t start dancing when we were 3!”

The dancing challenge is not uncommon among musical-theater students and professionals, said Iafrate, who added that it’s hard to get 18 people in a chorus to do “the exact same thing at the exact same time.”

“There’s a specificity and exactitude in musical-theater dancing that is unforgiving,” he said. “If you don’t have a background in it, you can’t just catch up by taking a couple of classes during your freshman and sophomore years.”

Outside of class and off the stage, musical theater has provided the students with communication and connection skills.

“Musical theater has turned me into a more empathetic person,” Skorupa said. “I like to think I was empathetic before, but now I know what it means to listen and care about someone.”

“Public speaking and talking to a group of people is no longer an issue,” Pinciotti said. “You know how to do it. I have friends who can give a business presentation because they’ve been on stage and acted.”

“The empathy, vulnerability and introspection that helps you know yourself are all life skills,” he said.

Iafrate, who also has taught at the Beijing Dance Academy in China, said the Theatre Department and its musical theater program will gain the ability to teach even more lessons by having a major and degree in the subject.

“If we have the certification saying ‘we offer musical theater,’ it will help us,” he said. “We will get more students (like Ajaka, Pinciotti, Skorupa and Wallikas) and keep the momentum going to do more shows at a greater level.”