A first-generation student speaks with faculty member Myra Sabir during the networking portion of the B-FIRST kick-off on Nov. 8. Image Credit: Laura Guerrero-Almeida. 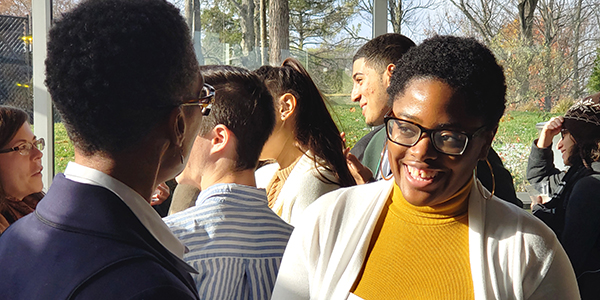 “I came into college not knowing how things worked,” said Rahman, a first-year student. “I’m hoping that here, at B-FIRST, I can learn and gain a mentor and be more prepared for college. If I have any questions, I can probably ask my mentor; if I need guidance, it would just be easier than figuring it out on my own.”

B-FIRST’s goal is to create a system by which first-generation students can connect with mentors who were once in the same position for support, inspiration and guidance.

Marissa Zelman, assistant director of the TRIO Student Support Services (SSS) program, is the lead organizer of B-FIRST. As a first-generation college student herself, Zelman said that there is an urgency in helping these students maneuver higher education.

“I realized the importance of support for first-gens not only from my personal experience but from my work in TRIO and SSS,” Zelman said. “I would see our first-generation students all the time not feel comfortable talking to faculty, not feel comfortable talking to staff, feeling ashamed about their identity. There is a need to bring light to this invisible, first-gen identity.”

First-generation college students is an umbrella term to describe those who do not receive parental support as they face the higher education system.

Heather Dorn, adjunct lecturer at Harpur College and a B-FIRST mentor, said that a mentorship is a vital tool in helping first-generation students.

“Having a mentor and being able to network in college is important to getting those extra experiences, like internships, job offers, letters of recommendation,” Dorn said.

The B-FIRST kickoff event included a space for mentors and mentees to network. It also featured guest speakers including psychology instructor Ann Merriwether and Randall Edouard, assistant vice president for student affairs and interim dean of students, who, among others, shared their success stories as first-generation students.

Joanna Cardona-Lozada, academic counselor with the Educational Opportunity Program and a member of the B-FIRST Committee, said that the event was organized to create a sense of community among first-generation students.

“We have been trying to put this event together for quite some time, knowing the importance of it overall,” Cardona-Lozada said. “The University has a lot of first-generation students and they need a place for support and guidance.”

Rahman said that the guests’ speeches displayed the success a first-generation person can achieve.

“I learned many things from the speakers,” Rahman said. “I think the experience was enjoyable. I talked to two mentors. They shared their stories and their advice, and I feel like I have made a connection.”

“I want it to have a regular presence on campus,” Zelman said. “When a first-gen student comes here, I want them to know that B-FIRST exists, and they are not alone.”