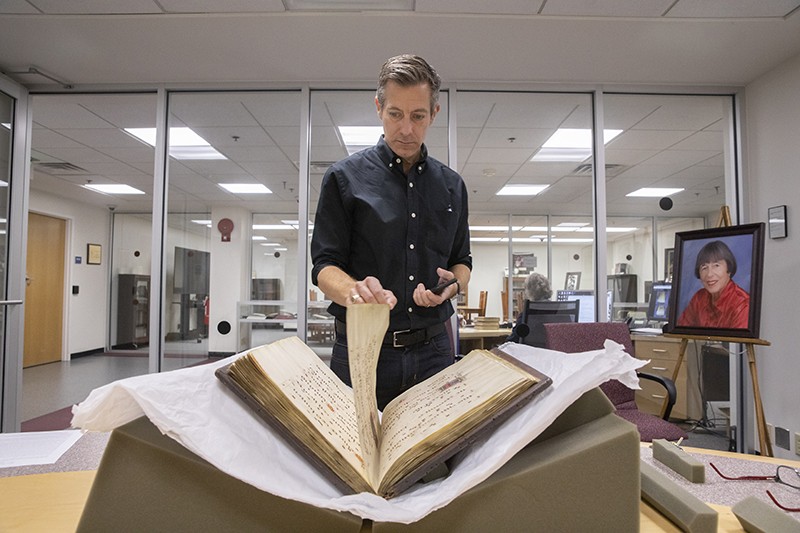 “It was exciting,” the associate professor of musicology said. “I had seen the pictures and knew the size of it. We kept taking off a layer and there was another layer of bubble wrap and tissue paper.”

Of course, few holiday presents date back to the early 16th century like the Gradual of La Crocetta. The Italian manuscript of Gregorian chant was written and decorated soon after the founding of a convent of Dominican nuns — Santa Croce, known as La Crocetta — in Florence in 1511. The book is in its original binding and includes a Requiem mass, along with Mass and Vespers chants.

To welcome the new music manuscript to its permanent home in Special Collections, the University Libraries will play host to a celebration from 3:30−4:30 p.m. Wednesday, Dec. 4, in the Huppé Room of the Bartle Library (second floor north in Special Collections). The event will not only provide a viewing of the Gradual of La Crocetta, but also includes speakers and a performance of music from the manuscript by the Southern Tier Singers’ Collective, led by Assistant Professor William Culverhouse, director of choral activities. A spring concert of chant drawn from the manuscript is also being planned.

The acquisition comes less than a year after the University purchased two parchment manuscripts of French Books of Hours during an auction at Christie’s London.

At the Books of Hours reception on Feb. 28, Schleuse made a suggestion to Marilynn Desmond, a distinguished professor of English, who has played a major role in the medieval-book acquisitions: It’s time for a music manuscript.

“I thought: ‘That’s a good idea,’” Desmond said. “It would extend the notion of what we are doing with medieval manuscripts to another discipline.”

A first attempt at acquiring a music manuscript was unsuccessful. But then Desmond, a former director of the University’s Center for Medieval and Renaissance Studies (CEMERS), saw the Gradual of La Crocetta in a catalog and let Schleuse know about it.

“It was love at first sight when I saw it online,” she recalled. “Music manuscripts are so beautiful and compelling.”

Schleuse was on a bus to New York City when he received Desmond’s message.

“As soon as I started looking at the catalog listing, I said: ‘This is the one we must have,’” said Schleuse, who specializes in 16th- and 17th-century music. “It has so much central, well-known chant repertoire. I knew I could use it to teach both undergraduate and graduate students.” 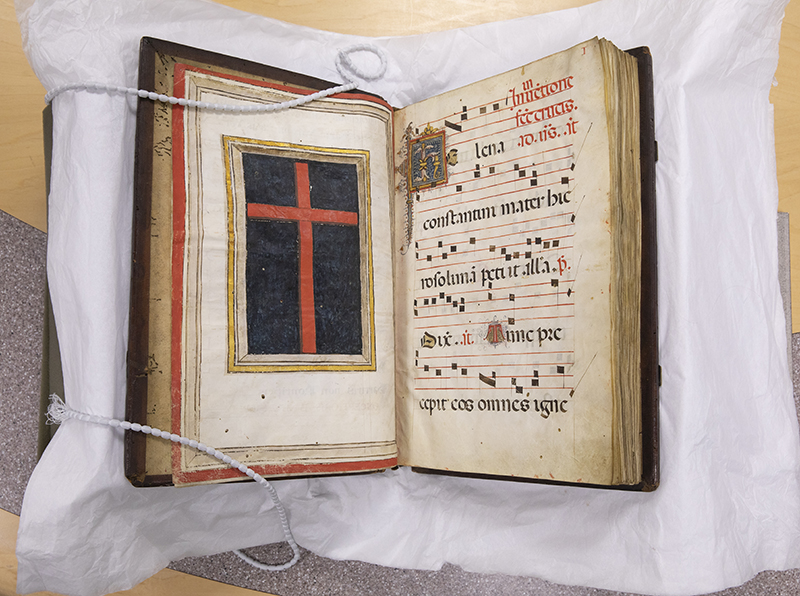 Contributions from the University Libraries, the Bernard F. Huppé Fund (along with an additional gift from Alex Huppé), the Aldo and Reta Bernardo Fund, CEMERS, the departments of music, English, classical and near eastern studies, the Material and Visual Worlds TAE, President Harvey Stenger, Provost Donald Nieman and Harpur College Dean Elizabeth Chilton enabled the University to purchase the Gradual of La Crocetta from Les Enluminures in Chicago.

The manuscript arrived at the University in the second week of October, sitting for a day to adapt to its new environment before being opened by Schleuse, Blythe Roveland-Brenton (head of special collections at the Libraries) and Heather Parks (head of preservation at the Libraries).

The Gradual of La Crocetta is unique for a number of reasons. First, the unusually large book (about 16x11 inches) was created after the printing press arrived in Europe.

“There were already books being printed in Italy and Germany,” Desmond said. “Yet music remained a manuscript production for much longer.”

“Books of chant were not among the first to be printed because printed music was simply too small,” Schleuse said. “Chant has to be written large enough to be read by a whole choir gathered around the book. This manuscript preserves the way chant was being sung just before the Counter-Reformation. After that, it was changed and simplified. In the 19th century, this form of chant was restored in the Catholic church, and this is the form now used by churches that still sing Gregorian chant.”

Secondly, the manuscript highlights the ownership of Santa Crocetta and its house of nuns through a decorative frontispiece: a red cross on a black background. The manuscript also features a note on the front dating it to 1543.

The founder of Santa Crocetta — Domenica da Paradiso — is an ideal candidate for further research, Desmond said. Domenica was influential across Europe at the time, exchanging papers with popes such as Clement VII and Paul III.

“Little work has been done on her in English,” Desmond said. “Having this manuscript might stimulate graduate students who work on early modern Italy.”

Both undergraduate and graduate students from disciplines such as music, classics, English, art history and history are likely to benefit from studying the Gradual of La Crocetta.

“I teach this music to my students every year,” Schleuse said. “But if all they ever see is a modern version of the music or the recordings, it’s hard to teach them about the structure of the manuscript or how this music was used. If they can see a book that was actually used for (the music), it becomes crystal clear.”

For Desmond and Schleuse, the manuscript is not just an acquisition, but an investment for Binghamton University.

“I’m struck by how my students are moved by being in the presence of manuscripts,” said Desmond, who added that a Hebrew Bible is next on the acquisition wish list. “They respond and talk about it for the rest of the semester. … Undergraduates in most places don’t get to look at manuscripts — even in places where they have collections. The fact that we’re doing this with a pedagogical aim for including undergraduate (research) is good for the mission of the University.”