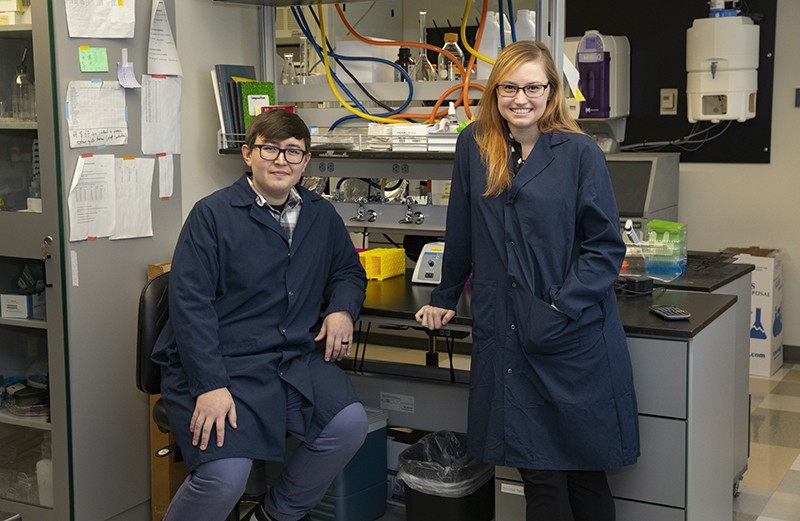 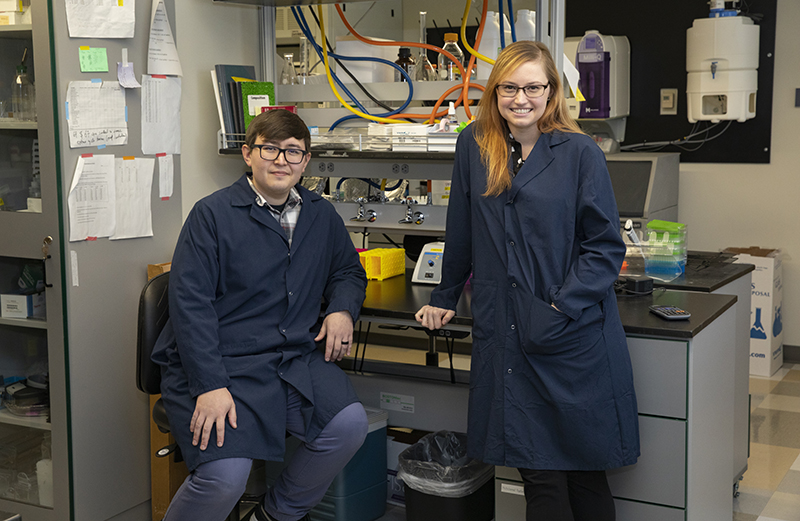 The grant awards — each about $60,000 — will enable Siara Rouzer and Andrew Vore to support their dissertation research, fund travel, equipment and supplies, and take part in professional development.

“It’s a beautiful seal to your graduate-school career that a funding agency says: ‘You are producing good science,’” Rouzer said. “It’s not just your mentor or your department that has a clear interest, but an objective, external source.”

Rouzer, who received her undergraduate degrees in psychology and English from the University of Mary Washington in Fredericksburg, Va., arrived at Binghamton University in 2015 and began working with Marvin Diaz. The assistant professor of psychology’s Alcohol and Development Lab focuses on understanding neurobiological, physiological and behavioral adaptations that result from exposures to alcohol and stress during development.

“Can we demonstrate that there are negative consequences from women drinking, even in moderation, during pregnancy?” she said.

Some women drink while not yet knowing that they are pregnant, she added.

“Even that early, the child is actively undergoing development,” Rouzer said. “And alcohol is impacting them.”

Vore, who received his undergraduate degree in psychology from Indiana University-Purdue University Indianapolis, has worked with Psychology Professor Terrence Deak since arriving on campus in 2014. Deak’s Stress, Alcohol and Aging Lab aims to better understand the consequences of early-life stress and alcohol exposure.

Vore’s dissertation looks at the long-term consequences of adolescent alcohol consumption with a specific focus on binge patterns of drinking. He is examining whether individuals with a history of binge consumption display different “blood-brain barrier permeability.”

“The blood-brain barrier is one of the gatekeepers to the brain — and even relatively small changes in what can access the brain could have large consequences on general health,” he added.

The application process took Rouzer and Vore more than 18 months to complete. Prior to that process, the pair were two of the first students to take part in a $1.6 million alcohol-research training grant that the University received from NIAAA in 2017. The T32 training grant gave Rouzer and Vore the opportunity to work with faculty members, discuss research, and develop writing and presentation skills.

“It provided us with a good jumping-off point for writing this (application) because we engaged in skill-building workshops for conducting rigorous science and writing grants,” Rouzer said. “Grant writing is an essential skill for scientists.”

“The most valuable part was getting access to faculty members and peers in a way in which we all could have a conversation about our work,” Vore added. “There’s a lot of value in getting perspective from people with expertise in different areas.”

Rouzer and Vore drew from the T32 experience in their 60-page award applications. This fall, they became the University’s first NIH National Research Service Award recipients in more than five years.

“This (honor) speaks highly of the training grant and the things that will continue to come from it in the future,” Vore said.

Both Vore and Rouzer also spoke highly of their mentors.

“The thing that has always captivated me about Terry is that he’s so passionate about science and what he does,” Vore said. “He comes back from conferences and just explodes into the lab. It’s obvious that he loves this. I want to have that excitement about the work we are doing, and the work others are doing.”

“He is collaborative, creative and totally committed to advancing our knowledge regarding both immediate and long-lasting changes in the adolescent brain produced by binge-like alcohol consumption,” Deak said. “His studies are forging new paths and approaches for our lab, and he has been instrumental to all of our projects — not just his own. I am grateful to work with such a thoughtful young scientist and will look forward to watching his career unfold.”

Diaz praised Rouzer’s enthusiasm and motivation in the field of prenatal alcohol research.

“Siara has been proactive in pursuing opportunities to enhance her professional development and success,” he said. “Some examples of these opportunities include giving oral research presentations at national and international scientific conferences and serving as a behavioral neuroscience representative on the Student Council for the American Psychological Association. I believe these achievements highlight why Siara is a special researcher, and foreshadow her success as a future independent researcher.”

Rouzer said that Diaz has given her and other students “the tools and techniques to succeed.”

“He is truly invested in our progress and success,” she said. “He’s not trying to produce ‘Diaz clones.’ He’s helping us to become our own researchers.”

Vore and Rouzer said the NIAAA awards will help them be more competitive when they seek post-doctoral positions after graduating in 2020. In the meantime, both believe that the honor is a reflection of a Psychology Department that has provided a supportive environment for student researchers.

“It feels like the award is a giant aggregate of all of these people and all of this time spent helping us,” Vore said. “We have a training grant and awards that will make the department even more appealing for graduate students. It reflects so positively on Binghamton University’s continued reputation as a research institution.”