M. Stanley Whittingham, Nobel Laureate, is off to Stockholm

Whittingham and a small entourage are off to Sweden, where he’ll be awarded the 2019 Nobel Prize in Chemistry on Tuesday, Dec. 10 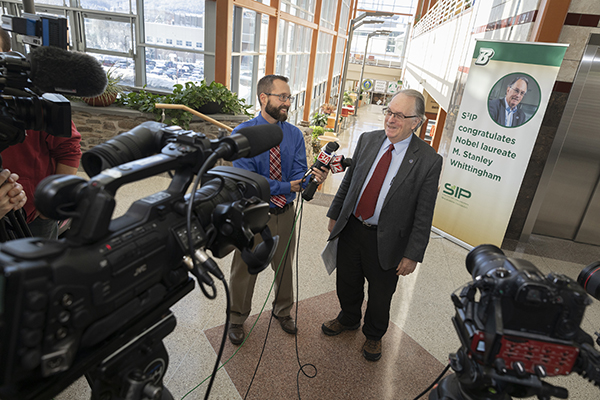 The Nobel Prize ceremony will be livestreamed at 10:30 a.m. Tuesday, Dec. 10, and there will be a watch party open to all at the Center of Excellence at the Innovative Technologies Complex. The ceremony, being held at 4:30 p.m. Swedish time, will last about 90 minutes.

He was packed and ready and left at noon Wednesday, Dec. 4, to fly to Stockholm, Sweden, where, after a whirlwind of activities, Distinguished Professor M. Stanley Whittingham will receive his Nobel Prize in Chemistry in a ceremony on Tuesday, Dec. 10.

And more than his suitcase was packed — so is his schedule for the next week.

After his arrival, Whittingham will have downtime to relax on Thursday, but from 9 a.m. Friday until he boards a plane for home, his time is taken down to the minute, including for the fitting of his formal attire.

“There’s one event after the other,” Whittingham said, “TV interviews, talking to high school classes, giving formal lectures at Stockholm University and Uppsala University, and a banquet.” (He already provided his lecture slides, so he’s ready to go.)

And did he mention dinner with Sweden’s King Gustaf and Queen Silvia at the Royal Palace? Or separate receptions hosted by the U.S. and British ambassadors to Sweden? Or a scientific discussion at the Swedish Parliament? Or perhaps even that they don’t receive their Nobel medals at the actual ceremony?

“They don’t actually give us the medal there because too many people lose them. We pick it up later!” Whittingham said. He’ll actually receive his medal from the Nobel Foundation on Thursday, Dec. 12.

What is his lecture about? “Oh, where I was brought up, who got me interested in science, and what led to the lithium-ion battery, and all about how it happened,” Whittingham said.

“A long time ago, now 50 years almost, I was working at Stanford and then for Exxon on new energy ideas, so we started looking at fuel cells and came up with some ideas,” he said. “I was sent to NYC to give my elevator speech to the Exxon board and they said, ‘It looks good,’ so they put money into it and within a couple of years we were actually making batteries and testing them.”

With the world now recognizing his contributions, Whittingham’s life has been more hectic at times, but it’s “just the regular places I go where I’m recognized,” he said. “But everybody is talking about the chemistry prize more than the others because everybody understands it.

“It’s going to be an exciting time to get dressed up like penguins for a couple of days with a lot of pomp and circumstance,” he said. “Then I hope to relax for Christmas and New Year’s with my family.”