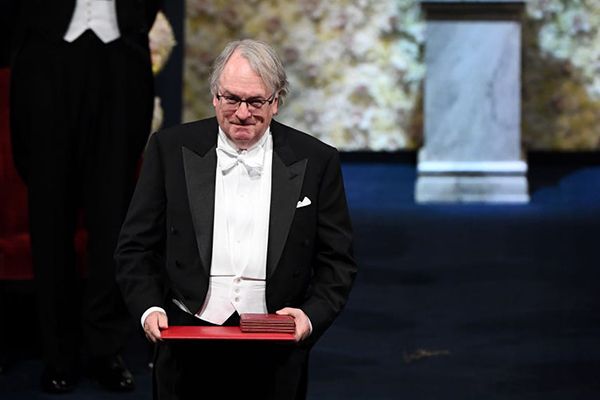 About 70 people gathered at the Center of Excellence at the Innovative Technologies Complex to watch Distinguished Professor M. Stanley Whittingham receive the 2019 Nobel Prize in Chemistry during a Dec. 10 ceremony being live-streamed from Stockholm Concert Hall in Sweden. Whittingham was one of three scientists to receive the chemistry prize. The others were John B. Goodenough of the University of Texas at Austin, and Akira Yoshino, of Asahi Kasei Corporation in Tokyo, and Meijo University in Nagoya, Japan.

The ceremony began as Sweden’s King Gustaf, Queen Silvia, Crown Princess Victoria and Prince Daniel processed onto the stage where they sat in ornate chairs draped in blue and gold. With an orchestra seated above and behind the stage, the Nobel Laureates then took their seats and the royal anthem was played.

Nobel Prizes were awarded in chemistry, physics, literature, physiology/medicine and economics during the 75-minute ceremony. The Nobel Peace Prize had been awarded earlier in the day to the Prime Minister of Ethiopia, Abiy Ahmed Ali.

The Binghamton crowd of students, faculty and staff watching the ceremony applauded as Whittingham walked on stage — and anytime he was on camera.

Chairman of the Nobel Foundation Board, Professor Carl-Henrik Heldin, welcomed the audience and spoke of the impressive accomplishments of each of the laureates “that are the result of their innovative ideas and hard work and serve as an inspiration to us all.”

Heldin noted that Alfred Nobel, himself a scientist full of ideas who held more than 300 patents, “was a strong believer in the importance of research. Only based on facts could the world make progress.” Nobel’s view is today being challenged with irrational thinking and narrow views gaining ground in today’s world at the expense of scientific achievements, Heldin said, and it is as important as ever to defend the scientific method that allows progress to be made.

“It’s only through discussion based on knowledge that new insights will be gained,” Heldin said. “A good education system and schools for all of high quality are essential.

“The discoveries of this year’s laureates show an impressive breadth. However, they’re still clearly centered around the core values of the Nobel Prize — rational thinking, humanism and cooperation across borders — values that are as relevant as ever before, and they cannot be taken for granted. We all need to engage and contribute. In this the Nobel Prize can play a role. Only through continued struggle can humankind keep improving itself, its society and its environment. ”

With musical interludes throughout the ceremony, the Nobel prizes were awarded first to three physicists, followed by the three chemists including Whittingham, then the physiology/medicine, literature and economics winners.

Speaking of Whittingham’s and his fellow chemists’ work, the audience was asked by presenter Professor Olof Ramström of the KTH Royal Institute of Technology to imagine a world where we have unlimited access to stored electric energy wherever we are, perhaps from renewable energy sources. “Not so long ago, this was very much a dream,” he said. “Today, however, we have come a long way to meet this goal and the lithium-ion battery has increasingly become a viable solution.

“It has proven to be tremendously arduous to develop efficient and rechargeable batteries,” he said. But lithium, discovered 200 years ago in the Stockholm archipelago, is the lightest metal and has remarkable properties that make it useful for batteries with very high capacity. “Our laureates took hold of this challenge and managed to tame lithium into what eventually became the lithium-ion battery.

“Stanley Whittingham worked for ion transport and superconductivity that discovered a titanium-containing material that could sufficiently take up and release lithium ions,” Ramström said. “This revelation led to a lithium based battery with the potential of around two volts.”

Goodenough and Yoshina built on Whittingham’s foundational work. Together, their chemistry discoveries laid the groundwork for modern lithium-ion batteries, leading to dramatic changes in our society and contributing to today’s mobile revolution; powerful, portable electronics; and electric cars.

Each chemistry laureate was asked to step forward to receive their Nobel Prize “from the hands of his majesty the king.”

When all laureates had received their prizes, the ceremony concluded with the royal anthem and the Festival Grand March as the laureates and dignitaries left the stage.

Following the ceremony, Binghamton University President Harvey Stenger was still in awe of being there and helping to celebrate Whittingham’s accomplishments. “It was an incredible experience,” he said. “We are so proud of Stan!”

Watching from the Binghamton campus, Executive Vice President for Academic Affairs and Provost Donald Nieman commented on the “wonderful ceremony and how great it was to see Stan and Binghamton University recognized on the biggest stage for science, literature and peace in the world. At a time when the value of rational inquiry is questioned by many, it was refreshing to see a celebration of science and art. Binghamton couldn’t have a better ambassador than Stan.”