Opened in 2017, building joins others on campus that have achieved certification 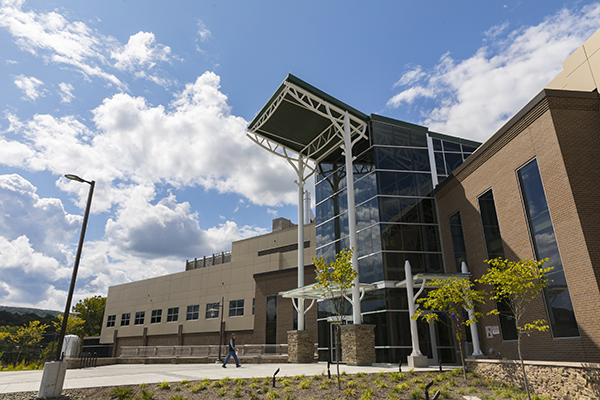 Binghamton University’s Smart Energy Building at its Innovative Technologies Complex on Murray Hill Road in Vestal has achieved LEED Gold certification from the U.S. Green Building Council (USGBC) — the council’s second-highest certification possible behind only LEED Platinum. LEED, which stands for Leadership in Energy and Environmental Design, is the most widely used green building rating system in the world.

The Smart Energy Building, which opened in 2017 and is home to the research efforts of the departments of chemistry and physics, includes a number of green building standards that enabled it to achieve LEED Gold, according to University architect William Hall.

Features both above and below ground were incorporated into the building’s design and helped capture the points needed by USGBC to achieve LEED gold. “For example, the building and windows were designed to be situated to take advantage of daylight harvesting,” Hall said. The south-oriented, two-story main entrance lobby and public space with floor-to-ceiling glass is evidence of this. And a green roof serves as an insulator from cold and heat.

Below ground, Hall said, the building includes tanks that can hold 200,000 gallons of water from the storm management system. This “gray water” is used for toilet flushing and mechanical systems.

Additional energy savings measures include LED lights and light controls throughout the building, which have become standard features of most construction and renovation projects at Binghamton as the University continues its focus on sustainability. Even the construction process itself is considered in the USGBC LEED certification process, so construction materials were purchased near the project site and construction waste was recycled.

Science buildings are big energy users due to the nature of the work that takes place in these buildings, according to Sandy DeJohn, the University’s utilities manager and sustainability coordinator.

Specialized equipment such as ultra-low freezers and fume hoods are huge draws on power, she said. With more than 80 laboratories, the Smart Energy Building presented an opportunity for DeJohn and her team as they monitor energy use on campus.

“We’ve been targeting fume-hood exhaust reduction for quite some time,” she said, and since about 2010, the University has been using low-flow hoods that have 40% lower volume than conventional hoods, but also have constant volume. An air-quality detection system was implemented in the Engineering and Science Building labs to allow further reduction of fume-hood exhaust when the air is determined to be clean in the space, bringing the fume-hood exhaust rate in that building down by 60%.

“Recognizing that the Smart Energy Building would have a significant number of hoods, the project design team collaborated with our energy management contractor to add multi-level controls based on space occupancy and fume-hood door positions to bring the exhaust volume down by 80% when it is deemed safe,” DeJohn said. “This latest design will become the new standard in science buildings whenever possible.”

All new construction or major renovation projects at Binghamton University have been built to LEED Silver or higher standards since the early 2000s, following a New York state executive order signed by then-Gov. George Pataki in 2001 that directed state agencies to be more energy efficient and environmentally aware. The Smart Energy Building is the latest addition to the University’s LEED portfolio: