Chinese, Japanese, Korean works are on display through March 4

This ink and color on paper of a cloud dragon with a magic stone is on display at "The Surface and the Line: Alumni Gifts of Asian Art" exhibit at the Binghamton University Art Museum. It is from the collection of alumnus John Copoulos. 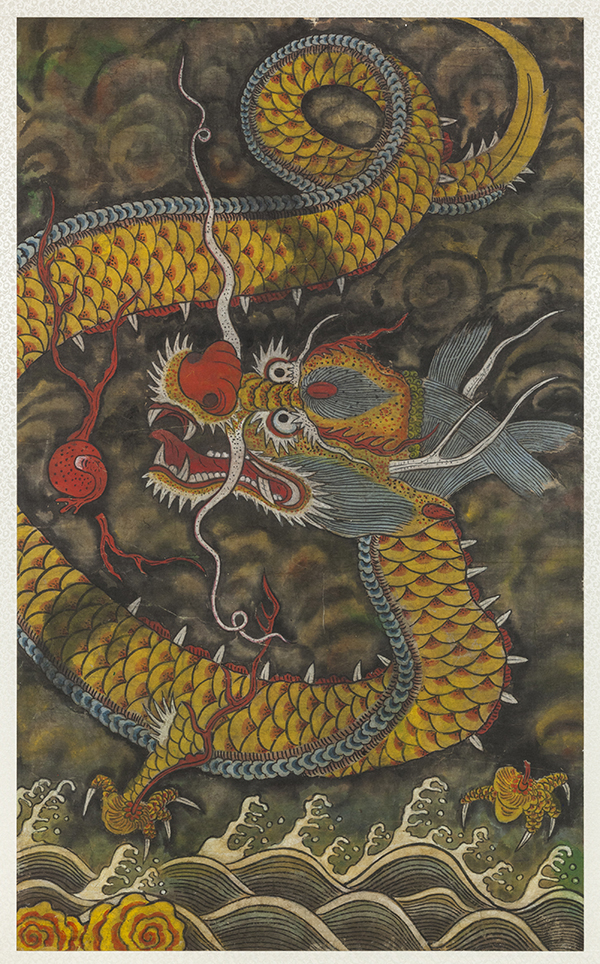 This ink and color on paper of a cloud dragon with a magic stone is on display at "The Surface and the Line: Alumni Gifts of Asian Art" exhibit at the Binghamton University Art Museum. It is from the collection of alumnus John Copoulos.
By Ethan Knox and Sarah Merke

The exhibition, titled “The Surface and the Line: Alumni Gifts of Asian Art,” runs through March 4.

Nancy Um, the faculty co-curator of the exhibition as well as a professor of art history and an associate dean of Harpur College of Arts and Sciences, believes that the complementary artworks from each region “came together beautifully as a show.”

“The reason we chose the title ‘The Surface And The Line’ is because there’s a lot going on in these works. It’s pretty vast,” Um said. “I have a feeling that there are going to be some pieces that viewers are going to be surprised by. There are some unique Japanese woodblock prints, for instance, that are very special in terms of their visual qualities.”

The exhibit will feature works from the New York City collection of the Reifers and the San Francisco collection of Copoulos, both of which cover a wide chronological scope. For instance, some of the pieces were made by a Yellow River Valley civilization from 2,500 BCE and there’s also work produced by an artist who’s still alive today. Objects range from Chinese ceramics painted with graduated hues, patterns and shapes, to calligraphy prioritizing flatness, linearity and brushstrokes. 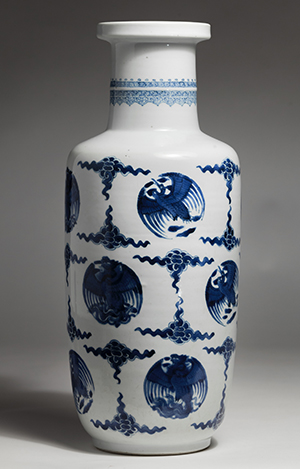 A Chinese porcelain rouleau vase from the 1661-1722 period of the Qing Dynasty is on display at "The Surface and the Line" exhibition. It is from the collection of alumni Stanley and Susan Reifer.

Other works that are incorporated into the exhibition include a “chaekgeori,” uniquely produced in Korea. This special acquisition is a famous genre of painting and is mounted on a screen. It displays painted tools, such as ink sticks and books, that were commonly found in a scholar’s study. An exquisite and monumental Chinese porcelain rouleau vase from the 1661-1722 period of the Qing Dynasty, featuring blue and white designs of cranes, phoenixes and clouds, will also be on display.

Rather than their being organized by time period or by region, the works are divided and displayed across the exhibition into sections based on four themes: line, perspective, color and pattern, and finally, the monochrome tradition.

“We’re pairing together some of the oppositions that characterize Asian art,” Um said. “There’s a real interest in how we can show depth through strategies like using different tones or materials. Oftentimes people associate flatness with Asian art, but we’ve got these two amazing reverse glass paintings that showcase the opposing tendencies of flatness and depth fused together.”

Two researchers, Joonsoo “Jason” Park, a graduate student and PhD candidate in art history, and Gabrielle Bonilla, who is pursuing her bachelor’s degree and set to graduate in 2022, also worked on the project with Um.

“The Binghamton University Art Museum is not just about putting on exhibitions,” Um said. “We’re interested in using the museum as a space for pedagogy and exchange between students and professors. As an instructor, I’m excited to be able to show students different parts of the process of working with objects.”

Diane Butler, director of the museum, agrees: “Of course, we want visitors to benefit from seeing the beauty in this range of Asian objects, but we’re equally eager to see students and faculty exploring our collections with different sets of questions. We want the museum to be treated as a dynamic space with objects that will be understood differently by different people.”

Park, the co-curator, has previously curated a show on Chinese paper-cutting. Although his work is mainly focused in American art, he was trained to cover fields beyond his expertise and can read Korean and Chinese, which he called a “useful technique to do research.”

Park was excited to join the project when approached by Um, and dove headfirst into finding out more about each work of art.

“We spent most of the time looking at artwork, which is a very important thing. A lot of art students fail to do that. They do research. They read other books and articles, but most of them aren’t closely looking at the artwork,” Park said. “We needed to find out what the style is, what’s characteristic of these brushstrokes, what kind of impression we can get. And then we’re reading related work — how other artists’ work relate to this work. How it was historically positioned in the artist’s narrative.”

Park finds that projects such as these are important for both the students who are participating in them and for the visitors, who may not have a chance to see similar works close by.

“Binghamton is a very quiet, far place from all the cultural artistic experience focused in New York City,” Park said. “It’s good to have this kind of opportunity where they can think about things other than their majors. In small cities, it can be hard to express that kind of thing. Big exhibitions like this aren’t possible without institutions like Binghamton.”

Bonilla, who worked under Um in an independent study, engaged in deep research about eight of the objects and wrote the text that served as the basis for some of the labels in the exhibition.

Although she eventually found a rhythm in writing about the pieces, beginning the research was a challenge.

“I started with online research. Each object was given to me with a little bit of information relating to it, so the first step would always be looking at other museum databases and comparing the pieces to each other,” Bonilla said. “I’d then use that information to find out more about the art type itself, and look into how that art type was made and the history of it.”

Bonilla, who said she was interested in curatorial work beforehand, left the experience with an even greater appreciation for the art and the job itself. She said that participating in this project allowed her a number of opportunities that she wouldn’t have had otherwise.

“I think the moment that sticks out the most in my mind was when I was allowed to visit the vault where the art was held,” Bonilla said. “I was shown the pieces of the collection I wasn’t working on, and got to learn about different art forms. The atmosphere of the vault was exciting — it felt like I was looking at things that came straight out of history.”

This feeling of learning and growth is also shared by alumnus Copoulos, who said he is “extremely proud and gratified” to be able to share his collecting interests with the Binghamton University Art Museum.

“I hope it will spark interest in East Asian scroll painting/calligraphy with students and faculty who might not have had any exposure to it,” he said. “Through my collecting and research, I’ve learned so much about the cultures of China, Korea and Japan, while expanding my own aesthetic interests. That exposure has transformed my own art.”

The curatorial team members said they are excited to display the collection. They plan to dedicate the exhibit to Copoulos and the Reifers, whose gifts, even beyond this installation, have helped to diversify and grow considerably the Binghamton University Art Museum’s permanent collection of Asian objects.

“They have been so generous to the University over the years, and we want to acknowledge that they have been great supporters of the work that we do,” Um said. “We want them to see their legacies on display. And we get to show art that doesn’t always get shown in this area. It’s great to be able to share these works with the community.”