Tommy Iafrate’s spring 2019 production of "Ordinary Days" by Adam Gwon was one of eight invited to perform at the regional festival, putting on three standing-ovation performances. Image Credit: Provided. 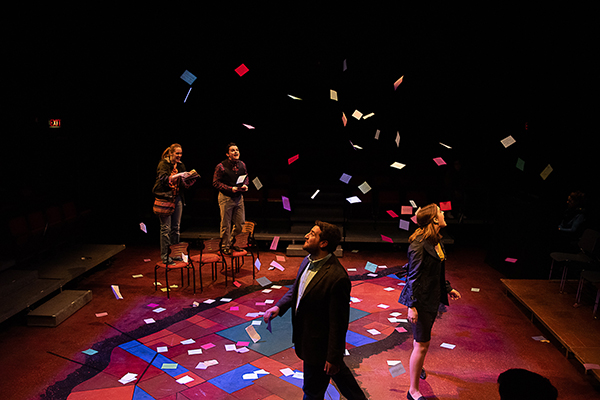 Tommy Iafrate’s spring 2019 production of "Ordinary Days" by Adam Gwon was one of eight invited to perform at the regional festival, putting on three standing-ovation performances. Photography: Provided.
By Kari Bayait

Life has come full circle for Assistant Professor of Musical Theater Tommy Iafrate, who is back from a recent trip — with 17 students — to the Region II Festival at the University of Maryland for the Kennedy Center American College Theatre Festival (KCACTF). Iafrate’s engagement with the festival began in his undergraduate years, and now he teaches and mentors students at Binghamton University who are involved with the University’s production program and KCACTF.

The Theatre Department is an active member of the KCACTF, which means a representative within the network sees Binghamton University faculty-directed productions to review and recognize students for outstanding work in performance, stage management and design. In some cases, the production itself can be nominated to remount and perform at the regional festival. Iafrate’s production of Ordinary Days received this nomination.

During his graduate studies at Western Illinois University, Iafrate participated in the KCACTF directing competition, winning his region and earning a trip to the national competition at the Kennedy Center in Washington, D.C. The nationals include a week-long program of workshops and the opportunity to learn from award-winning directors and theater artists. Attending the national competition was a life-changing experience for Iafrate, who admitted it set his career trajectory as a director and artist. Now, no matter where he ends up directing, teaching or performing, he intends to always give back to the program that had such a huge impact on his life.

Achievements from this year’s regional festival

Student participation in KCACTF activities at Binghamton University has been steadily increasing in recent years. “From day one, our students were competitive at the highest levels of the regional festival,” said Iafrate. “In the last five years, we’ve had students in the finals of the Irene Ryan Acting Scholarship Competition, which awards scholarships to outstanding student performers who attend KCACTF regional and national competitions.

“Sixteen pairs of students make it to the [Irene Ryan] finals every year, and for us to even have one in that race throughout our region is really impressive,” Iafrate said. “This year, we had two pairs in the final round! And one student who made it to the final round of the Musical Theatre Competition ended up winning and being invited to the national festival.”

That student, sophomore theatre major Julia Rakus, was last seen in the fall 2019 production of A Man of No Importance at Binghamton University, directed by Iafrate. She’ll be heading to the national festival in April.

“I was astonished by how incredible everyone was. Before finding out I won, I was secure in the fact that everyone was talented and truly deserving of the title.” 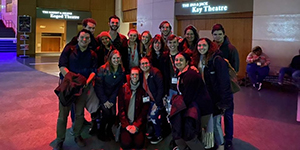 Binghamton University theatre students at the KCACTF regional festival. Image Credit: Provided.
Aaron Penzel ’19, who now works at Serino Coyne, was able to perform Ordinary Days again at the recent regional competition. “I love that show (Ordinary Days) so much and could perform it with that cast over and over and over again,” he said.

The programming available to regional festival attendees is expansive. Students are able to attend workshops in over 10 different areas of theater, ranging from things Binghamton University offers like acting, directing, design and management, to theater journalism/advocacy and playwriting. They have the opportunity to audition for short- to full-length performance pieces and meet students from other institutions to expand their network as undergraduates.

Senior English major Abigail Lane was the single awardee of the festival to a partial scholarship to the Open Jar Institute. She plans to go to its summer intensive, which provides one-on-one training with some of Broadway’s biggest stars, performers, directors, choreographers, agents and casting directors. “I’m so excited, I can’t believe it! I’m definitely planning to go this summer. It’s such a great opportunity” she said.

Iafrate hopes these Binghamton’s successes will illustrate that there are opportunities for students to participate in the festival and expand their horizons during the winter break. The greater the participation at the regional level, the more possibilities for Binghamton students to compete at the national level.

“It’s quite an honor to compete and perform at this national institution with Tony-award winning professionals,” Iafrate said. Students who attend the national competition have their accommodations completely covered by KCACTF — an investment in students that Iafrate recalls from his days at the national competition. An organization that lets students focus on the art and gives everyone the opportunity to be at nationals, not just to those who can afford it, inspires him to give back by participating as a respondent and head of the musical theatre program at the regional festival, and as a music director at the national festival.

When talking with students about what it feels like to be at the regional festival, Iafrate said they’re proud. “You never have as much school pride as you do when you’re at KCACTF, when you hear your school name announced when someone has made it to the next round of the competition. You are so proud of your fellow classmates and that they will be representing your university.”

This trip to regionals was made possible with significant support from Harpur Edge and administrative support from the Theatre Department.