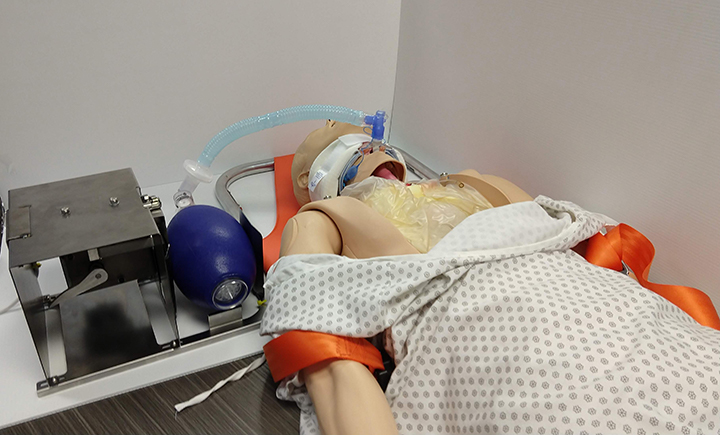 Binghamton University Foundation employee Dave Reyner is working with a team to create a device that eliminates the need for a healthcare worker to squeeze a manual resuscitator, freeing personnel to care for other patients. This is the first prototype of the invention, called B Resuscitator. Image Credit: Provided.
By Natalie Blando-George

Dave Reyner doesn’t know much about mechanical ventilators, but on March 18 he decided to develop one after hearing again about the global need for these lifesaving pieces of medical equipment amid the COVID-19 pandemic.

His aspiration lasted until that evening, when the Binghamton University programmer and database specialist discussed the idea with his wife, an occupational therapist at UHS Wilson Medical Center.

“She told me I wasn’t going to be able to do it because ventilators are extremely complicated,” Reyner said.

Barely missing a beat, he asked her about manual resuscitators. Most often referred to as Ambu© bags, these handheld devices require a healthcare worker to squeeze the bag at regular intervals to ventilate a patient who isn’t breathing or not breathing adequately.

“What if a little motor did the squeezing instead of a person?” Reyner asked.

Hoover quickly agreed to put CMP’s engineers and fabricators to work creating a design and building a prototype.

“I may have gotten a little weepy at his generosity,” Reyner admitted.

Three days later, CMP had completed a computer-aided design; three days after that, the first prototype was completed.

We’re all in this together

While this work was taking place, Reyner contacted Patti Reuther, director of the Innovative Simulation and Practice Center (ISPC) at Binghamton’s Decker College of Nursing and Health Sciences. Reuther lent the project an older human patient simulator (SimMan) so the team could test the effectiveness of the invention for simple lung inflation.

When Reyner has a prototype ready for more robust testing, the ISPC will test the device on an advanced SimMan using a high-fidelity lung (funded by a grant from the Dr. G. Clifford and Florence B. Decker Foundation) that can simulate any lung condition.

“In this case, we will use it to mimic the typical lungs of someone with COVID-19 — bilateral pneumonia,” Reuther said.

Another University connection Reyner made was with the Koffman Southern Tier Incubator, specifically Per Stromhaug, assistant vice president for the Office of Entrepreneurship and Innovation Partnerships, and Olga Petrova, director of the Acceleration of Cleantech Entrepreneurship and Economic Development program. They put the organization to work assisting Reyner with numerous issues, including regulations for certified medical manufacturers and required U.S. Food and Drug Administration (FDA) applications. They also connected him with a medical consultancy group.

For guidance about mass production and procurement, Reyner reached out to former colleagues at The Raymond Corporation, who put him in contact with President and CEO Michael Field and Senior Director of Energy Solutions, Procurement and Leasing Jennifer de Souza.

Understanding that he might need assistance on a political level, Reyner also contacted state Sen. Fred Akshar’s office as a path to connecting with Gov. Andrew Cuomo’s office.

“For this to succeed, it’s going to take a wide range of people working together,” Reyner said.

A product is born

Reyner named the device the B Resuscitator, but affectionately refers to it as “the magic box.” He described it as a power-assisted emergency ventilator substitute and said the material costs to produce the first prototype are less than $100.

“The ultimate cost will depend on the ‘fanciness’ required,” he said. “It’s a medical device after all, so a certain amount of fanciness is required!”

Reyner added that the B Resuscitator is by design a simple device.

“This is certainly nowhere near as fancy or helpful or thorough or complete as a ventilator, but it replaces the need for a healthcare worker to physically squeeze the bag and frees that person up to care for others,” he said.

“It’s good enough for some situations, and right now that’s what we need, and we need it fast.”

Reyner and the team are also mindful of the present supply-chain limitations and created B Resuscitator using materials that aren’t difficult to source. Nothing required to fabricate the device is used to produce ventilators. In addition, B Resuscitator easily connects to manual resuscitator bags, intubation materials and tracheal tubes that hospitals already have on hand.

Despite being tired (no surprise — he hasn’t been sleeping much) and missing spending time with his wife, Reyner is thrilled with the progress. In about two weeks, he has achieved what some inventors take months or even years to do.

Yet, there’s so much more to accomplish. Reyner and CMP are testing the first prototype and will refine it as necessary. There are an enormous number of details and issues to be identified, discussed and decided upon.

But the biggest question of all — and one that could stop the project in its tracks — is how much it will cost Reyner to obtain regulatory approval for the project.

“If getting FDA approval costs a million dollars, then I’ll have to tell all my friends, ‘Thank you so much. It has been a great run, but it’s over.’ But if it’s $10,000, we’re talking a much different ballgame,” he said.