Unexpected lessons: Students on campus and in the community share their pandemic experiences 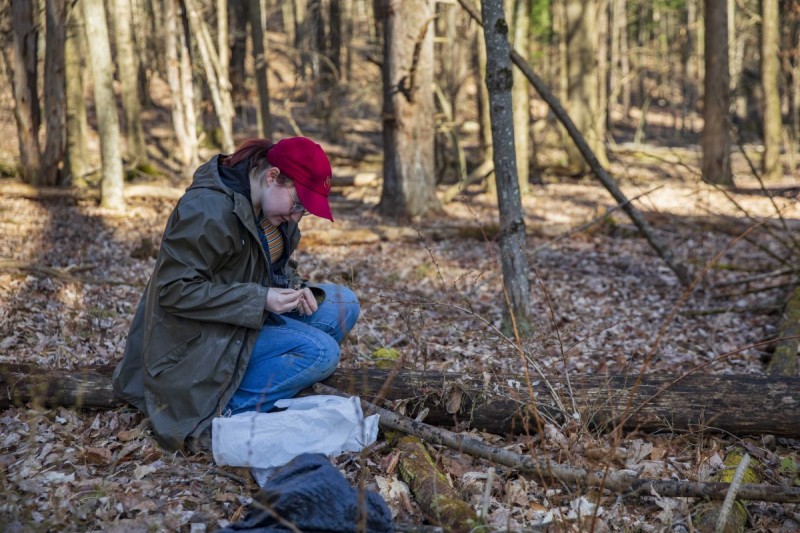 Normally home to thousands of students, Binghamton University’s campus is largely empty of them. Fewer than 320 remain in the residence halls, spaced out in single rooms with private bathrooms across a few buildings to maintain social distancing. For those who remain, the sight of friendly Bearcats has become rare indeed.

“There’s nobody here and hardly anybody left in the building. I see more people in the grocery store,” said Jacob Goodman, a junior mechanical engineering major who lives in the Hillside Community. “I can take whatever parking spot I want — even eight parking spots.”

With classes now solely online, many students have chosen to return home to their families. For others like Goodman, staying on campus or in a Binghamton-area apartment seemed the wiser choice.

Hailing from Changchun in northeastern China, Wencong Qin — Jacky to his friends — chose to stay on campus for an obvious reason: Home is on the other side of the world. The 12-hour time difference would complicate his online courses and studying could prove difficult, the fourth-year mathematical sciences major said.

Staying on campus did, however, involve a move — from Newing College to the Dickinson Community. These days, he mostly stays in his living space, with trips out to the Chenango Champlain Collegiate Center Dining Hall for food. Social distancing doesn’t prove difficult when there is no one around, but he makes sure to wear a mask outdoors, he said.

Not only international students have chosen to remain. Several downstate students also chose to stay in the area, citing reasons that range from rent to research, as well as avoiding hotspots of COVID-19 back home.

Goodman’s hometown of New Rochelle was an early center of coronavirus in New York State — but that’s not why he chose to stay on campus.

“At first, the labs were still open and I wanted to stay here and continue my work. Then the labs closed,” he explained. “Although it’s lonely here, I think the best bet was to stay and focus on my work.”

Avoiding COVID-19, on the other hand, directly informed Justin Michael Martin’s choice to stay in his Binghamton apartment. Those stories about healthcare workers living in garages and guest rooms to avoid spreading coronavirus to their families? True, said the senior human development major. He should know: His parents are both nurses on Long Island.

His mother came down with COVID-19 after treating a patient with the illness, although she has since recovered and was released from the hospital. She counseled him to remain in Binghamton as a physically safer option, he said.

Martin’s father — who had been sleeping in the guest room to avoid catching the virus — became ill himself in early March, not from COVID-19 but from exhaustion. What many people don’t realize is the toll — both physical and financial — that the pandemic takes on essential workers, Martin pointed out. Due to his mother’s illness, his parents worried that they wouldn’t be able to pay their mortgage. Martin offered to assist with the bills, but his father ended up working more overtime instead.

Diana Knoell, a senior environmental studies major, also chose to stay in the Binghamton area rather than return home to Massapequa, Long Island, where COVID-19 is more widespread. And like many off-campus students, she didn’t want to lose the money she spent on rent.

“I didn’t want to expose myself to COVID-19. It’s better here,” she said. “It’s more relaxed and I can focus more on my classes.” 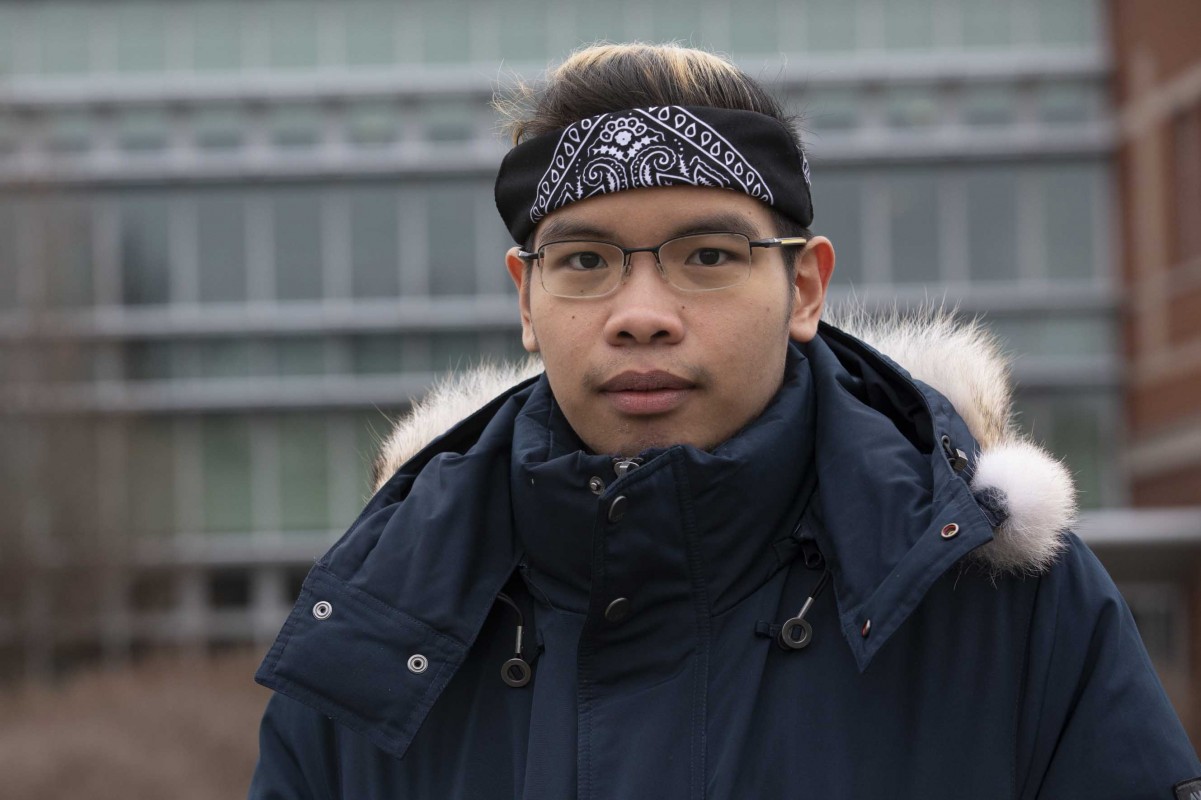 The “new normal” of online classes and avoiding social contact definitely has its downsides, but student experiences vary.

Qin found it difficult to focus in online learning classes, although he’s working to adapt. For Goodman, on the other hand, it’s been a definite plus. In his asynchronous classes, he can download lectures and view them whenever he wants, repeating or pausing them if necessary. He doesn’t even need to waste time walking to class.

“My day has actually become a lot more efficient,” he said.

While online classes may be convenient in some senses, they also mean missing out on field trips and lab work. Knoell’s ecological agriculture class originally planned to visit four farms, but had to resort to videos instead, which doesn’t provide the same perspective, she said. Hands-on activities such as growing beans and corn are also off the table.

For seniors, the pandemic also has meant missing out on some of the hallmarks of their final semester.

“I understand that there are a lot of things that had to stop. But it was sad,” Knoell admitted. “It hit me that I was missing out on a lot of those ‘last time’ kind of things. Commencement being pushed off — it’s a bummer. But as long as everyone is safe and healthy, it will all be okay.”

On the plus side, Knoell does take regular trips outdoors. At the Nature Preserve, she recently collected leaves from native and non-native species to aid visiting Assistant Professor George Meindl’s research in how these plants affect the environment. After collection, the researchers make teabags, which are then left in various parts of the preserve as part of the project.

Interestingly, the pandemic has led to an increase of one species in the preserve: humans. Knoell sees more people hiking, walking their dogs and hanging out on the trails, which she admits is a bit counterproductive when it comes to social distancing.

That’s in contrast to the rest of campus, where the remaining residential students largely stay in their rooms. It’s lonely, both Qin and Goodman admitted.

“I’m really focused on my work but not having that human-to-human interaction is weird,” Goodman said.

Martin faces a different set of challenges. He can work from home for his internship with Admissions, but his job at Chipotle requires him to be out in the public, which makes true social distancing all but impossible. Disinfecting has become routine, he said.

Neither he nor his roommate have a car, and Off Campus College Transport has been discontinued during the pandemic. When the BC Transit bus schedule doesn’t coincide with his restaurant shift, that means Uber — which also comes at a cost, both monetary and in terms of health risk. He and his roommate typically use delivery services for groceries, another expense.

“We try to mix it up with getting groceries delivered and going out for takeout so that we don’t use up all our groceries in a week,” he said. “We also try to support local Asian businesses during times like this.”

For Martin, the pandemic brought the realities of racial discrimination to light, particularly at his restaurant job. One older customer asked if he had been to China, while a group of Binghamton University students fake-coughed the word “coronavirus” in his presence.

Prior to COVID-19, he considered himself Filipino rather than Asian; in fact, his family emigrated from the Philippines 12 years ago.

“It wasn’t until recently that I started to think that my identity doesn’t matter now, since people will look at my face and categorize me as ‘Asian’ without regard to the fact that I’m not the Asian they think I am,” he said. “I usually get, ‘Are you Chinese?’” 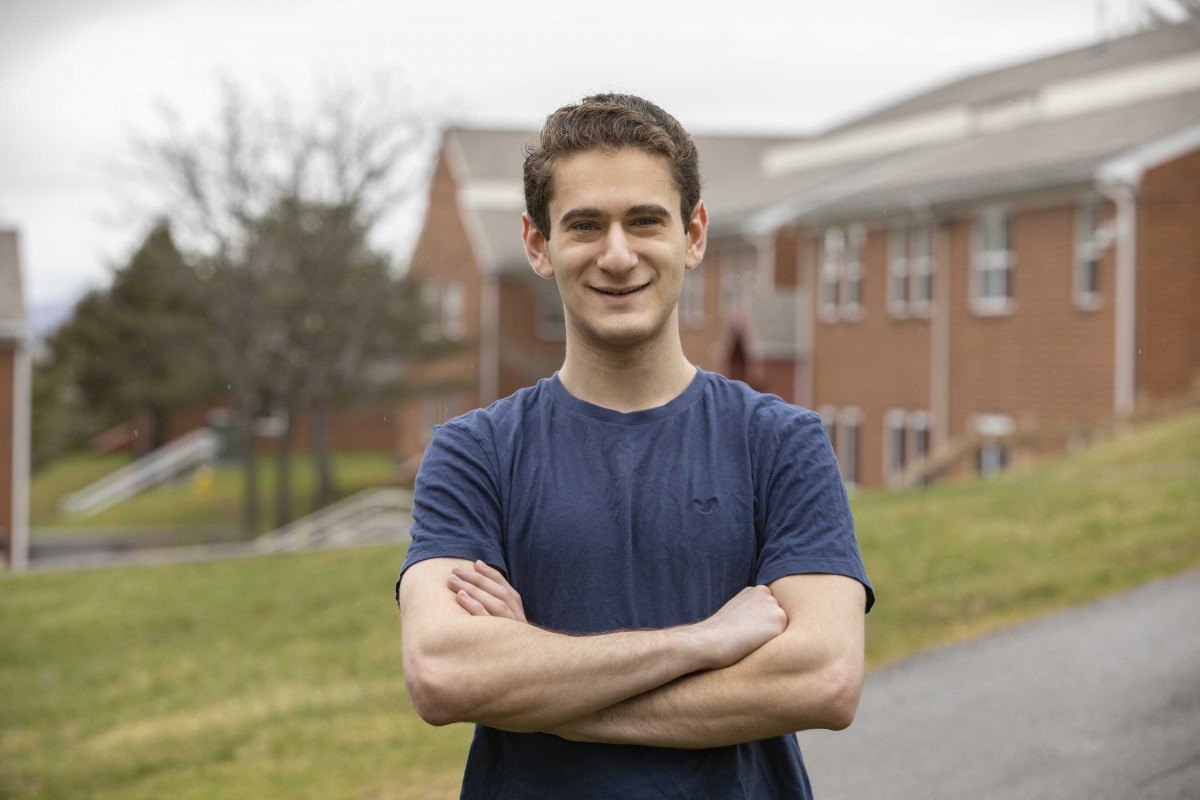 Jacob Goodman stands outside the Hillside Community, where he is currently residing on campus. Image Credit: Jonathan Cohen.
New perspectives

Challenges also represent opportunities and new perspectives. In fact, the pandemic has highlighted the importance of social connection for many students.

“Social ties are quite important in times like these. For me, at least,” Qin said.

A member of the community service fraternity Alpha Phi Omega, Knoell has found other ways to meet with her peers: from group chat to Netflix party extensions and even prompts for creative projects.

“There are really cool ways to interact with our friends, even though we’re far away from each other,” she said.

Goodman has stayed busy creating a working ventilator in his room on campus. He still plans to visit his family during Passover — virtually, with a Seder on Zoom organized by his mom.

The pandemic also has highlighted the importance of planning for unforeseen circumstances, as well as the weaknesses inherent in the nation’s healthcare and educational systems, students pointed out.

“I cherish my time here in Binghamton. The lessons I learned these past three weeks have been equivalent, if not more than, what I learned in all of my classes. I have no regrets choosing Binghamton University because the people I met and became close to here are the ones I would rather be close to in another pandemic,” said Martin, adding: “All we can do is work together to create a better future.”