New boiler on the block

Clean-energy company finds a home in the Koffman Incubator 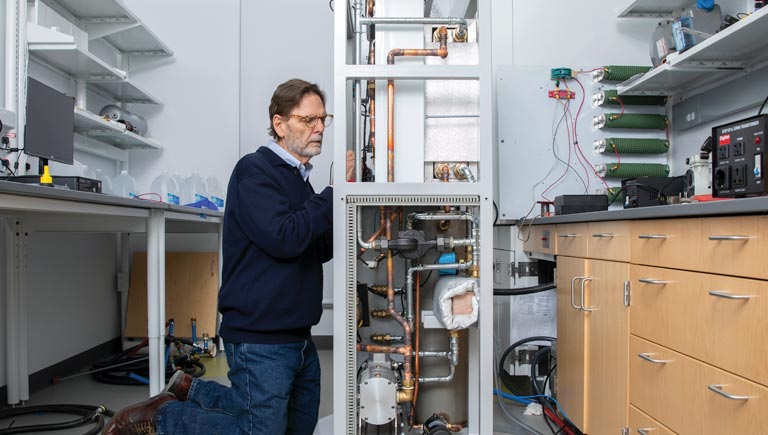 From Europe, with love

Binghamton’s Koffman Southern Tier Incubator sees a constant stream of packages dropped off. Startup businesses at the facility receive orders of parts, packaging, prints and promo items on a regular basis. But one Thursday afternoon, this rhythmic influx of parcels was abruptly altered as a large, white moving truck backed up to the loading dock.

“It’s here!” exclaimed Mike Brookman, CEO of incubator member company BRASH Engines, as staff came together to make sense of the commotion. Once docked, the truck’s hatch swung open to reveal a large, vertical, plywood crate. Those not in the know were left to speculate about its contents — did Brookman win the lamp from A Christmas Story? The crate, straight from Europe, contained something a little less scandalous, a… basement boiler system.

Sometimes called the ‘heart of the home,’ a boiler produces hot water and pumps it through pipes for a home’s heating needs. These units can last decades, plugging along in basements while going largely unnoticed.

With clean-energy innovation happening all around it, the boiler industry has remained steadfast. Legacy industries such as this are ripe for change, which BRASH Engines seeks to deliver.

Not your father’s vehicle

Mike Brookman of BRASH Engines is a chemist by training with a background in product development — avionics, lithium-ion batteries, even a breathing apparatus for firefighters. But his path to develop an innovative home boiler system began somewhere else entirely.

“One day, just in passing, I overheard someone discussing an ‘air car’ being developed in France. I found it interesting and did some research on it,” says Brookman. “What I found was a very inefficient engine design that I felt compelled to improve.”

The seed was planted, and improve the design he did, receiving federal Small Business Innovation Research (SBIR) funding to optimize the design. Brookman and his team received their first patent for the engine in 2010, having developed a car that they believed would change the automotive industry as we know it.

Eager to put his patented technology on the market, Brookman approached vehicle manufacturers with this breakthrough technology, but they were perfectly content with the engines they already had. Not one wanted anything to do with the invention. Years of research and development had gone into a product with no customer. So what did Brookman do? He pivoted!

He knew his technology had potential. “What else could this engine be used for?” he pondered.

As you may have guessed, work began to turn the engine into the boiler of the future. Again, a working prototype was developed and manufacturing partners were approached. “They shrugged us off, too,” says Brookman. On top of this, the unit itself failed to work predictably. Years of work and personal investment had brought him to another dead end.

“Not to be melodramatic, but I was at the bitter end. Couldn’t go any further,” Brookman recalls.

But after a competitor encouraged him to attend a HVAC trade show in Germany — the largest in the world — he decided he had nothing to lose by going. It was there that Brookman wandered to a small booth in a back corner that had one staff member and no visitors. The inventor at this tiny booth had developed what’s called an expander — the missing piece Brookman was looking for.

Because turning water to vapor generally uses a massive amount of energy, this expander turned out to be the key element for the BRASH unit, which gets its efficiency partly from using a “working fluid” to transfer heat. This special fluid is used in unison with the expander and other components to turn water to vapor almost instantly, using less energy and allowing for on-demand hot water.

Powered by natural gas, the unit is 95% efficient. It uses a fraction of that 95% of useful energy to generate power, another fraction for heat and another for domestic hot water. Traditional boilers operate much less efficiently and release heat and toxic chemicals in their exhaust, whereas the BRASH unit releases only water and carbon dioxide. Additionally, BRASH utilizes excess heat to generate power, meaning homes essentially have a generator in their basement that supplies electricity whenever the boiler cycles on. Any excess energy can be fed back to the grid or stored in batteries to be used on demand.

And, by pairing a BRASH boiler with solar panels or wind turbines, the boiler can pick up the slack when the renewables aren’t able to produce enough energy for the home’s needs, allowing the home to maintain freedom from the electric grid.

The entrepreneurial roller coaster brought BRASH Engines to a critical point. As before, Brookman had a product but needed industry interest. A new focus on clean energy led him to pitch in NYSERDA’s 76West Clean Energy Competition, which attracts companies nationwide, with the goal of funding those that plan to develop their clean-energy innovation in New York’s Southern Tier.

BRASH, located in Connecticut, was a great fit for the competition, making it to the semi-finals, touring manufacturers, meeting with local utility companies, speaking with potential companies and being mentored by an entrepreneur-in-residence at Binghamton University. But, despite a strong showing, BRASH failed to place in the finals.

Though BRASH didn’t win in the traditional sense, Brookman felt his company had gained much more than money through the 76West experience.

“On my drive back to Connecticut, I was about halfway home and thought, ‘Why am I leaving Binghamton when I’ve made more progress on this product and outreach to customers in the last four weeks than I’ve made in the last four years?’” Brookman says. “So I contacted my mentor three days later and asked how to get involved with the resources in Binghamton.” 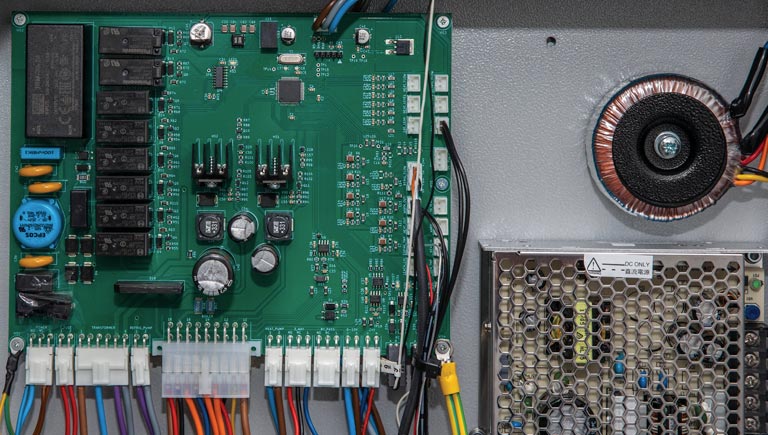 BRASH Engines has developed a boiler system with increased efficiency, decreased emissions and that creates energy to be used in the home or grid. Image Credit: Jonathan Cohen.

BRASH Engines became an official member of the Koffman Southern Tier Incubator as well as the Southern Tier Clean Energy Incubator, a New York State Energy Research and Development Authority (NYSERDA)-funded program within the incubator that focuses on providing mentors, grants and other resources to clean-energy companies. BRASH took up residence in laboratory space in the facility, upgrading from its previous laboratory — the converted barn behind Brookman’s house. Aside from infrastructure upgrades, a number of engineering students from Binghamton University assisted in further refinement of the unit, receiving hands-on engineering experience as part of their capstone projects or as paid interns through Binghamton’s XCEED program, which provides programming, mentoring, grants and stipends for the development and commercialization of cleantech innovations.

“It was almost an uncomfortable embrace by the sheer quantity of people here in the community ready to help out,” says Brookman.

Coming to a basement near you

BRASH plans to install 20 boilers into homes across the Northeast to collect a wide range of data and outcomes, then learn from the data and modify the unit as needed.

Production of the next 400 systems is expected to commence in 2020, with manufacturing happening in the Southern Tier. With a current waitlist, BRASH hopes to get its units to eager homeowners across the state, nation and, eventually, the world. As the demand for clean energy grows due to the global climate crisis, companies such as BRASH are stepping up to provide innovative and ambitious solutions that can redefine renewable sources.