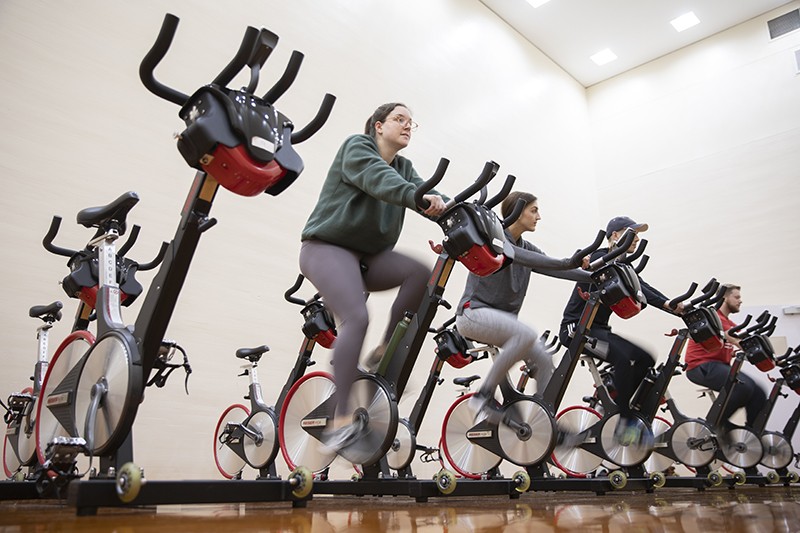 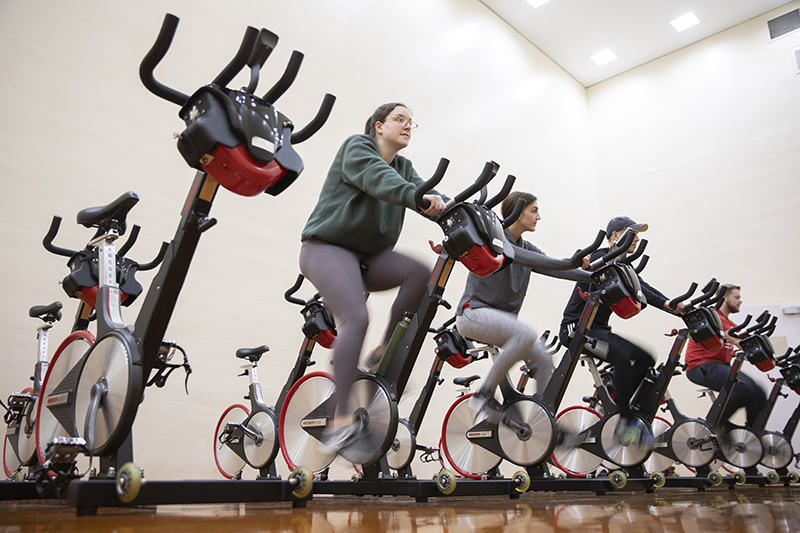 On a snow-covered Saturday morning in February, a half-dozen students on stationary bikes pedal fast and furiously in a basement room at the West Gym.

They may look at first glance like hundreds of others who use Binghamton University’s fitness facilities every day, but burning fat and building muscle are not the primary goals.

No, these chosen few are sweating for science.

An interdisciplinary team of Binghamton researchers is developing a monitor for every aspect of our health using a small electronic patch stuck to the back of the hand. The gizmo would know when users are most stressed, recommend how to improve their diets and keep a close watch for any changes in their body chemistry.

Think of it as a Fitbit crossed with Star Trek tech that could lead to a longer, better life — for those who pay attention to what it tells them, of course.

The potential key to success? Plain old human sweat, which turns out not to be so plain after all.

At her lab at Binghamton’s Innovative Technologies Complex, Assistant Professor Ahyeon Koh thinks about stress a lot these days.

Koh, a faculty member from the Department of Biomedical Engineering at the Thomas J. Watson College of Engineering and Applied Science, is developing flexible biosensors that can give us real-time information about how our bodies are functioning. Her research has addressed glucose monitoring, wound care and post-surgery cardiac health.

Much of her work since arriving at the University four years ago involves wearable microfluidic systems that can collect and utilize the sweat that our body produces.

Early last year, the National Science Foundation awarded $452,000 to Koh and co-investigator Seokheun “Sean” Choi, an associate professor of electrical and computer engineering at Binghamton, so they can develop a way to generate power using sweat-eating bacteria.

Later in 2019, the Nano-Bio Materials Consortium — a collaboration between the U.S. Air Force Research Laboratory and electronics industry association SEMI — gave a $388,000 grant to develop a sweat-sensing system to monitor stress levels. Collaborating with Koh on the project are Lina Begdache, PhD ‘08, an assistant professor of health and wellness at Binghamton’s Decker College of Nursing and Health Sciences, and Daehan Won, an assistant professor in the Watson School’s Department of Systems Science and Industrial Engineering (SSIE).

The battlefield possibilities of such technology are obvious, but like many military-related technological advances, it has plenty of potential for civilian medical applications, too.

“There is currently no accurate way to measure stress,” Koh says. “The way we do it now is through surveys, asking how people feel and how stressed they are. You can measure heart rate. Measurement is also affected by diet and lifestyle. It’s really complicated.”

Humans each have between 2 and 5 million sweat glands spread across their skin. Women usually have more but tend to sweat less than men.

Scientists also have discovered that there are differences in the chemical composition of sweat caused by overheating and sweat due to stressful situations, because they are produced by two separate systems. Apocrine sweat glands are found mainly in the armpits and produce an oily mix of proteins, lipids and steroids that can mix with microbes to cause body odor. The rest of the body is covered with eccrine sweat glands, which secrete the sterile and salty electrolyte solution meant to cool us off through evaporation.

“The reason I’m especially interested in sweat,” Koh says, “is because it is the biofluid with the most chemical information about our bodies that we can get outside of the body.”

Saliva can be contaminated by food and bacteria, tears are complicated by natural lubricants, and urine is too cumbersome to collect and analyze in day-to-day life.

One key indicator in stress sweat is cortisol, a hormone produced mainly in the adrenal gland. Cortisol stimulates the metabolism and suppresses the immune system during the fight-or-flight response and when blood sugar levels are low, promising our primitive animal instincts a better chance of survival.

Only with that understanding can a device to measure stress truly become a reality.

Back at the West Gym, Begdache knows how stress and diet can become a vicious downward spiral if not properly balanced. After all, she’s surrounded by college students.

For many of them, it’s the first time outside of their family homes. The pressures of maintaining good grades while juggling parental expectations and social lives can lead to poor eating habits — which, in turn, can cause even more stress on their bodies. Adding other factors such as lack of sleep, lack of exercise, mental illness and alcohol use can only make things worse.

Begdache earned her PhD at Binghamton in 2008, then stayed as an adjunct and later joined the Decker faculty full time. As a certified nutritionist and dietician, she has authored or co-authored research papers on dietary supplements, bowel disease, obesity and cognitive decline in the elderly.

Her collaboration with Koh and Won came after three years of brainstorming and applying for grants. It was Begdache’s idea to integrate nutritional information into Koh’s sweat study, and in 2019 they presented their first results at the Institute of Electrical and Electronics Engineers Research and Applications of Photonics in Defense Conference.

“My dream is to develop a personalized tool to help people adjust their diets in order to improve their moods,” Begdache says. “Whatever data we can collect now and whatever conclusions we can reach will be helpful for the next step.”

The early vision for the stress device is to make it as easy as possible, with color-coded readouts that users would photograph and log on a smartphone app in addition to diet information.

“If you have a tracker that will sense your stress level, it could give you a pop-up asking a few questions about what you’ve been eating,” Begdache says. “Then it can send you personalized recommendations about things to include in your diet to improve your mood. This will help with people not relying on medications, because some people don’t want the side effects.”

From his desk in the Engineering Building, Won loves analyzing healthcare-related data to find the patterns that will make people’s lives better.

He has used his skills as an SSIE researcher for studies about cervical cancer, kidney disease, human tissue identification and medical imaging. For the sweat study, he wants to develop a mathematical model that will predict someone’s stress levels in the future.

“I’m focusing on systematic integrations — not just collecting the dataset but understanding it,” Won says. “Dr. Koh’s device uses colors to show stress levels, but the information is collected daily. How do we do that? Let’s develop some mobile applications.”

One challenge is collecting as many samples as possible but using artificial intelligence to diagnose one individual. The small but not insignificant risk that sweat samples may be contaminated or have missing data also makes wide testing the preferred option.

Won praised the academic climate at Binghamton University for making interdisciplinary research such as this one. He doesn’t know much about biochemistry, Begdache isn’t an expert in data science and Koh isn’t a nutritionist. But together they make a good team that looks at each issue from different angles.

“The personal healthcare device market is growing super-fast,” Won says. “You think about the Fitbit, and the military is also highly interested. Our team is focusing on stress, which is interesting for everyone, but especially college students. How can we manage it better?”

Running the sweat trials at the West Gym are Paul Pearlmutter, ‘19, a biomedical engineering master’s student, and Gia DeRose, a junior majoring in neuroscience.

Pearlmutter — who is part of Koh’s lab — wears blue rubber gloves to collect sweat from the test subjects’ armpits and lower backs using gauze and medical tape, and he also takes saliva samples in small plastic tubes. DeRose coordinates the nutrition and stress surveys that each participant fills out.

While the current trials are mainly college students, the researchers know they eventually will have to widen that pool to all ages. However, Begdache points out that college students make good test subjects because of the common experiences they share: “If they’re not eating healthy and have high stress, we can learn from what they’re not doing and then improve their case. That could be helpful.”

At least one student has learned to keep a better eye on what he eats. “We have the scale from the study in our lab, and today I thought, ‘I haven’t weighed myself in a while,’” Pearlmutter says. “Then it was, ‘Oh, no more late-night snacks!’”