Craving waffles? Ilene Friedman will send you some

Alumna's Albany-area business draws customers from across the nation 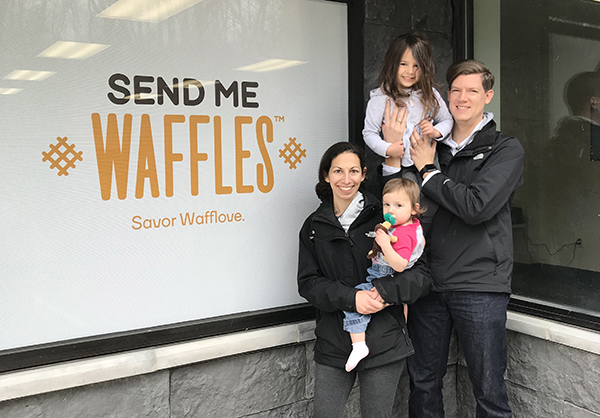 When Ilene Friedman ’06 moved into the Apartment Communities for her junior year, she had no idea it would influence her career path. With her own kitchen for her last two years of college, she and future husband Keegan Bailey ’06 could emulate Rachael Ray’s 30-minute meals.

“We’ve been foodies since then,” Friedman says. “We weren’t the greatest cooks but we were willing to experiment, and we’d pay more for a better product.”

It wasn’t until 2014 — when they ran a half-marathon in North Carolina — that their passion for food started to bubble into a business. After the race, they noticed the biggest line for food was at a truck serving Belgian Liege waffles. They fell in love with, and spent years trying to replicate, this culinary creation.

Last year, Friedman launched Send Me Waffles in the Albany, N.Y., area. The business works just like it sounds. Place the order online, and ready-to-make waffles arrive at your door. They can be consumed straight from the package or warmed in the toaster oven. But enjoy them by the “use or freeze” date, usually within two weeks.

“We did some research on competitors and found shelf-stable waffles were already being sold, but they came from Belgium, so they had a lot of preservatives,” Friedman says. “We use a lot of local ingredients — eggs, butter and milk. More than half of our ingredients are local.”

Let go of the idea that this is another Eggo. Friedman makes everything by hand from her small commercial kitchen. She makes a yeast-based waffle: the dough goes through three rising processes before it can be rolled into balls that are placed on the iron. It’s a two-day process to make one waffle. By marketing on Facebook and Instagram, she has attracted customers from more than 30 states.

“You’ll see white specks in the dough ball, and those are bits of pearl sugar,” Friedman says. “The chunk of sugar melts into the waffle, and the taste is a mix between a donut and soft pretzel.”

She cooks with a lot of love, sugar and butter. The result is a waffle that you’re better off heating up in a toaster oven.

“Don’t put this in a toaster because you get a lot of melted sugar at the bottom,” she advises. “That’s why a lot of people avoid making this kind of waffle altogether. It’s a pain to clean the waffle iron because of all the caramelized sugar.”