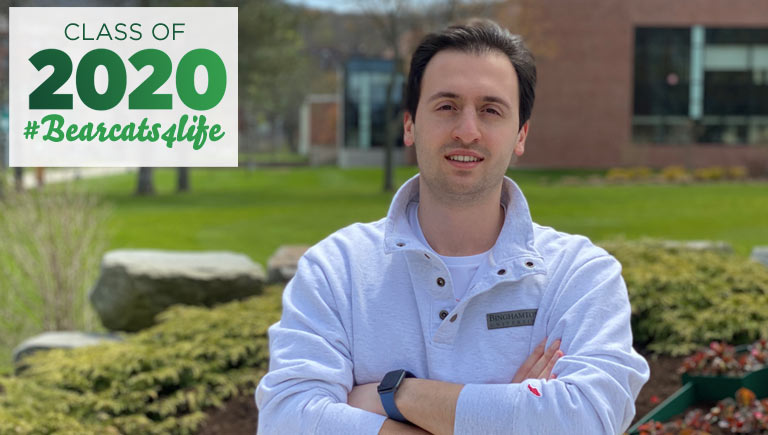 Recently returning to his home country of Turkey, Onur Tasasiz ’20 has been reflecting on his time at Binghamton University. However, graduating during a global pandemic also has him uncertain about what’s next.

As he runs down a list of potential outcomes for the months ahead, he paused and said, “I’m remaining optimistic.”

Born and raised in Istanbul, Tasasiz had an opportunity early in his college career at Middle East Technical University to spend a few weeks in Michigan to develop his English language skills. The experience left him wanting to spend more time studying in the United States.

With the backing of his parents, Tasasiz decided to move forward with the program.

“My parents have always told me that whatever I wanted to do, they’d support me,” he said.

It was his parents who also inspired him to study business administration.

“Before I started college, I’d spend most of my summers with my father and help him with the telecommunications company he owns,” he said. “I admire him. My father was the driving force behind me deciding to want to go into business.”

Hoping to own a business of his own one day, Tasasiz believed Binghamton University’s School of Management would be a good fit.

“If I want to own my own business, there is a lot I’d have to learn — not only general management, but also finance and marketing and accounting and all of these associated fields,” he said.

Concentrating in leadership and consulting, Tasasiz said one of the biggest challenges was learning the cultural differences in how to deal with both business leaders and customers.

“The dynamics are different. The culture is different. It’s beyond just the language skills,” he said.

The experiential education picked up in the School of Management is something Tasasiz believes will make him a better business leader in the years ahead.

“The things I learned are very valuable assets for me. They’ve helped me become a globally-minded person and have allowed me to understand how things work in different places throughout the world,” he said.

Beyond his future entrepreneurial plans, Tasasiz had opportunities to put his leadership skills to practice while on campus. He joined the Turkish Culture Association (TURCA) early on during his time at Binghamton, working his way up to president his senior year. 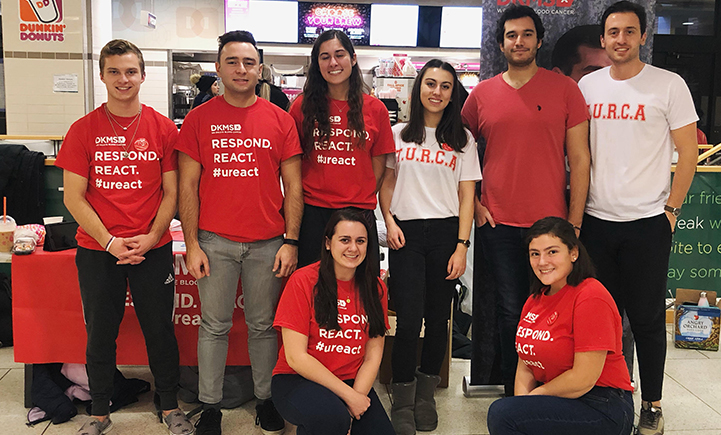 TURCA students
The group, according to Tasasiz, not only serves as a platform for Turkish students to interact with one another, but to encourage interaction with other members in the broader community.

“People may prefer to stay in their comfort zone or just talk to their close friends. That was something we, as a group, wanted to help solve. It’s not easy,” he said.

Tasasiz said the group organized social events, such as cookouts, to help introduce themselves to the campus. The group also took part in University Day at the Mall, interacting with members of the Binghamton community.

“I was able to apply the leadership skills I learned in my School of Management classes into my role in TURCA,” he said. “We were able to lead initiatives to not only promote our culture to the campus, but to help our individual members combat homesickness and feel at home in Binghamton.”

TURCA also worked to help Turkish students who hadn’t yet arrived on campus with a series of YouTube videos introducing prospective students to Binghamton.

“The biggest challenge in moving to a new place is figuring out things like where you’ll stay and where you’ll do your shopping and where you’ll find access to a vehicle if you need one,” Tasasiz said. “So we created these videos to give incoming Turkish students an idea of what to expect, and to ease some of the unknowns.”

His advice to incoming Turkish students to Binghamton is simple: get involved.

“Binghamton University and DDP offer so many great chances to develop yourself,” he said. “Don’t let your language skills be a barrier, because getting involved will strengthen your language skills. Jump in and take advantage of all of the programs and offerings.”

As for what’s next, Tasasiz is weighing his options. He acknowledges that the pandemic may prevent him from coming back to Binghamton in the fall for graduate school (he’s been accepted into the Master of Science in Data Analytics program), but his personal growth over the past couple of years has given him the confidence to remain optimistic.

“Without my friends and family with me, I was able to learn how to make decisions for myself. I was free to develop myself and felt successful in being able to adapt. I will miss that freedom, but was able to grow very much from it,” he said. “In Binghamton, I became an adult.”