A former basketball star and coach, Bowers is taking on a new challenge: becoming a teacher 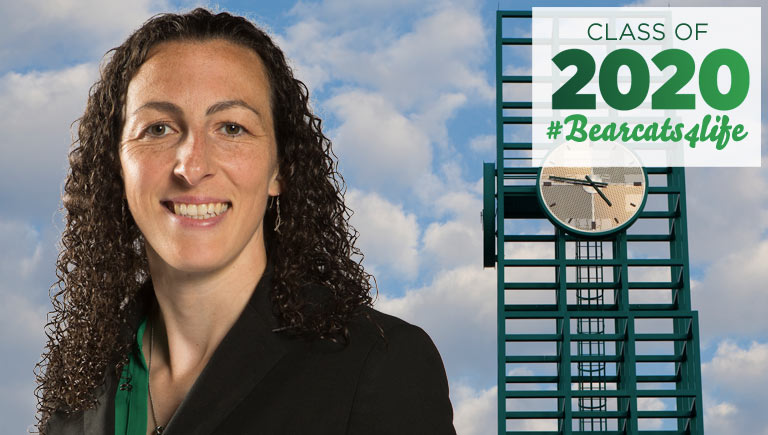 Over the course of her time at Binghamton University, Leah Bowers ‘02, MA ‘04, MSEd ’20, has been known primarily for one thing: basketball.

“I was always known in Binghamton, both on campus and in the community, as the basketball player or the basketball coach. It’s been a part of my identity for so many years,” she said.

Bowers went on to serve on the coaching staff for the team for 12 years, working her way up to associate head coach.

But after nearly 20 years with the Bearcats, she has decided to take on a new challenge: becoming a teacher.

“This is my third time graduating from Binghamton University,” she laughed. While she earned her undergraduate degree in human development, and a master’s degree in social sciences, Bowers said her coaching career ultimately inspired her to take on teaching.

“Coaching is great. I really enjoyed working with college students, but I had always enjoyed working at camps with kids. It was an age group I knew I wanted to work more with,” she said.

Knowing she’d need another master’s degree to become a teacher, Bowers started taking some of the prerequisite courses while she was still a coach, fitting in readings and homework while on the bus traveling to and from games. But tackling the program would need a full-time commitment, and she began to feel nervous about the impending transition.

“I was having conversations with my wife (Kristie Bowers ‘07, PhD ‘17) about it, and she told me I needed to go two feet in instead of continuing to dip my toes into the water,” she said.

So she did. Stepping away from coaching, Bowers jumped into the program.

“It was tough at first, but by the end of the first semester, I was ready to go. I was ready to work with kids more frequently and was getting a sense of what I wanted my classroom to look like,” she said.

Bowers said she felt motivated by the challenging TLEL program.

“It was a perfect balance of challenging courses, supportive faculty and a family atmosphere with the students I was in class with,” she said.

As she worked her way through courses and student teaching, Bowers found herself incorporating elements of her coaching skill set into her teaching mindset.

“I found myself getting proud of a student achieving a learning goal that he or she didn’t think they could do in the same way I’d get proud of a basketball player I coached hitting a three-pointer,” she said. “This idea of trying something new and getting back up when you get knocked down — teaching this isn’t so different in the classroom as it is on the basketball court.”

Bowers isn’t the first in her family to make a late career pivot. Her father, once a police officer, became a teacher in his 50s.

“My dad transitioned from one career into a very different career. I found myself thinking if he could do it, I could do it. I can handle it,” she said.

And while her classes are completed, Bowers looks forward to continuing her education.

“Teaching is a profession that you’re constantly going to be learning about,” she said. “That’s comforting to me as someone who is starting a new career at 40 years old. I’m not going to know everything when I show up to my first classroom, but I have the confidence that I can get better and continue to grow.”

Recently moving to the Boston area, Bowers said her goodbyes to her friends and colleagues at Binghamton, a place she called home for years. Part of her goodbyes included advice to those who were new to the community.

“If you’re new to the area, I encourage you to throw yourself into whatever you can. Volunteer, go to athletic events, go see a show at the Anderson Center,” she said.

“Throw yourself into this community because it gives so much back. For 18 years, it gave me everything it could.”