So Youn Kim's submission to the IIID Award competition looked at the creation of ruby-red glass. 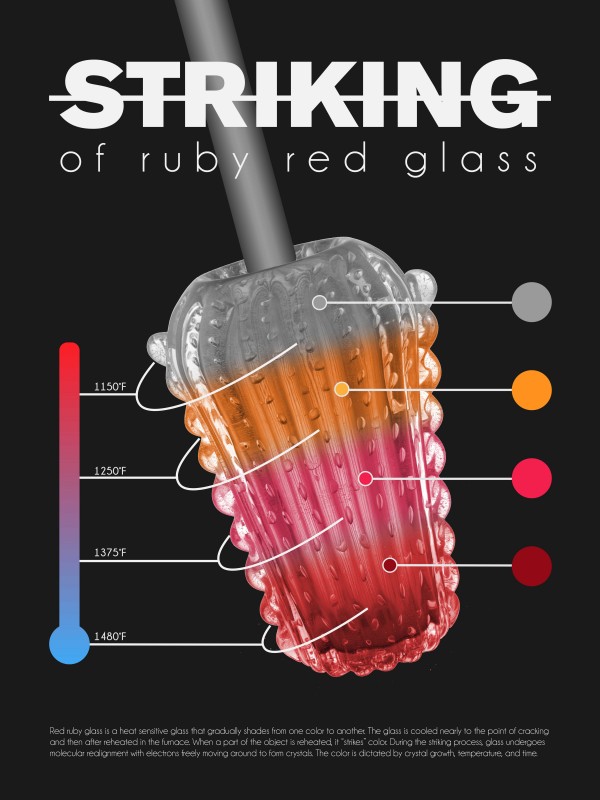 So Youn Kim's submission to the IIID Award competition looked at the creation of ruby-red glass.
By Jennifer Micale

Art conveys more than aesthetics. It can inform, illustrating complex ideas and relationships in ways that are more easily understood than long strings of specialist terms.

For example, an image can more elegantly explain how temperature variation creates different shades of red glass, the changes in eyeglass design, or how a lithium-ion battery works. In Assistant Professor of Art and Design Gökhan Ersan’s Graphic Design III class, students join scientific research with art to explain these and other complex concepts.

“It’s not just about creating beautiful artwork. It’s about research, and actually understanding the subject,” said So Youn “Alice” Kim ’18, who graduated with dual degrees in economics and graphic design.

This year, four art and design majors and Ersan himself earned recognition from the prestigious International Institute for Information Design (IIID). Home of the Information Design Journal, a leading journal in the field, the organization runs the IIID Award competition every three years. The 2020 student contest drew competitors from 10 different countries and 14 design schools, with categories including healthcare, social affairs, research and sustainability. Overall, 27 projects received awards, and will be published in a book by IIID. 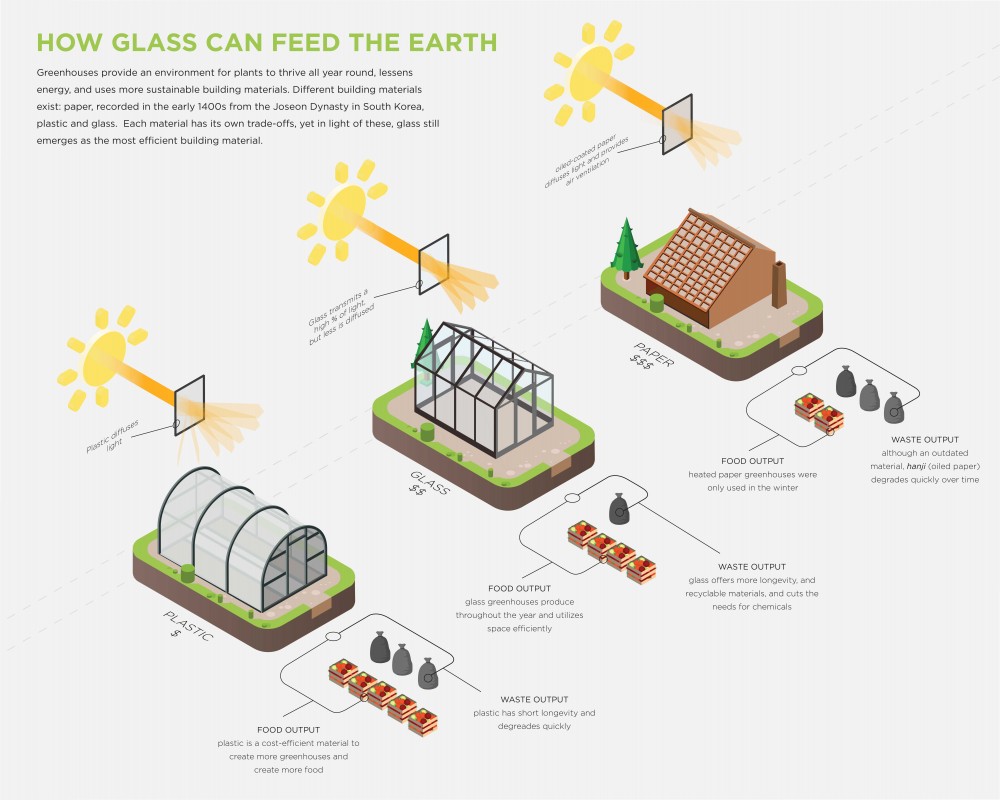 Brenda Son looked at greenhouses for her IIID Award project.

With one silver, two bronzes and a shortlist award, Binghamton’s students topped the list, a significant feat for a first-time competitor, according to Ersan.

Kim received a silver medal for an illustration of the process used to create ruby-red glass, considered a difficult task in the glass-making world, while Cindy Knickerbocker won bronze for a look at smart glass and privacy. Mary Horohoe also won bronze for a poster on the history of eyeglasses, while Brenda Son was shortlisted — equivalent to an honorable mention — for a look at different types of greenhouses.

Ersan and Associate Professor Louis Piper, director of materials science and engineering and the Institute for Materials Research, also received a shortlist award in the didactics category for a collaborative motion graphic, “Explaining Li-ion battery improvements.” Distinguished Professor of Chemistry M. Stanley Whittingham received the 2019 Nobel Prize in Chemistry for his work in developing the lithium ion battery, and the animation explains the science behind it to a general audience. Watch the motion graphic here.

Scientists often think visually, jotting down diagrams to explain concepts and mathematical formulas, Piper noted. Embedding those formulas in graphics can make scientific concepts more accessible, particularly to those outside the field.

“People are able to grasp it more quickly and are less put off by the layer of jargon required,” Piper said. “It’s a really important tool between multi-discipline scientists. Being able to communicate effectively is a skill researchers need to have.” 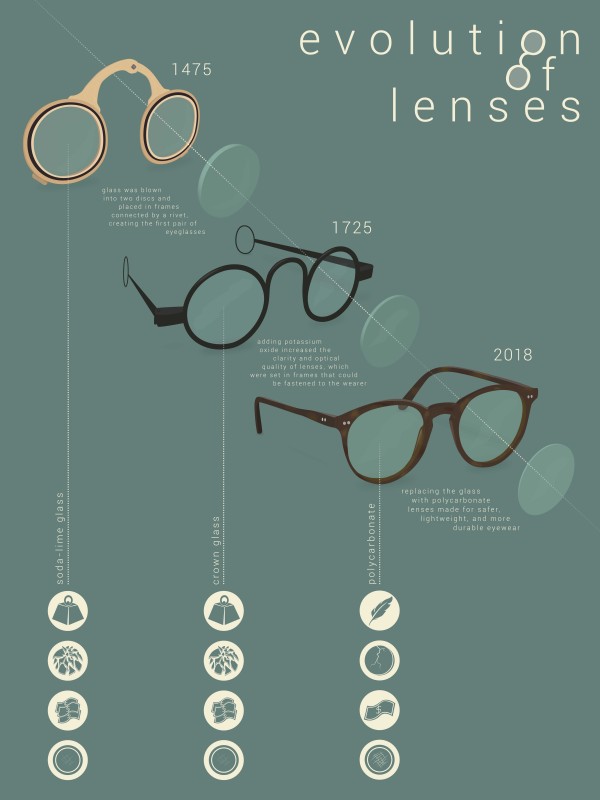 Mary Horohoe featured the evolution of eyeglasses in her project for the IIID Award competition.
The science of glass

It’s not a coincidence that the student projects focus on the science of glass. Marvin Bolt, curator of science and technology at the Corning Museum of Glass, visits the Graphic Design III class to suggest potential topics each semester, and provides feedback both during and after the design process. Students pick a topic that interests them and research it on their own, ultimately designing a graphic for a museum audience.

The Corning Museum of Glass has developed a library of interesting projects and ideas over the past five years, and may use the students’ ideas for a small exhibition, Bolt said.

Junior Cindy Knickerbocker explored the use of glass in privacy, particularly smart glass, which changes from transparent to opaque with the application of current. She focused on hospital settings, comparing smart glass with opaque glass and blinds in her project.

Knickerbocker, who works for the University as assistant to the associate counsel, actually has a background in science; she earned an associate degree in chemical engineering technology. She has long been drawn to the graphic design field and hopes to freelance in retirement, she said. 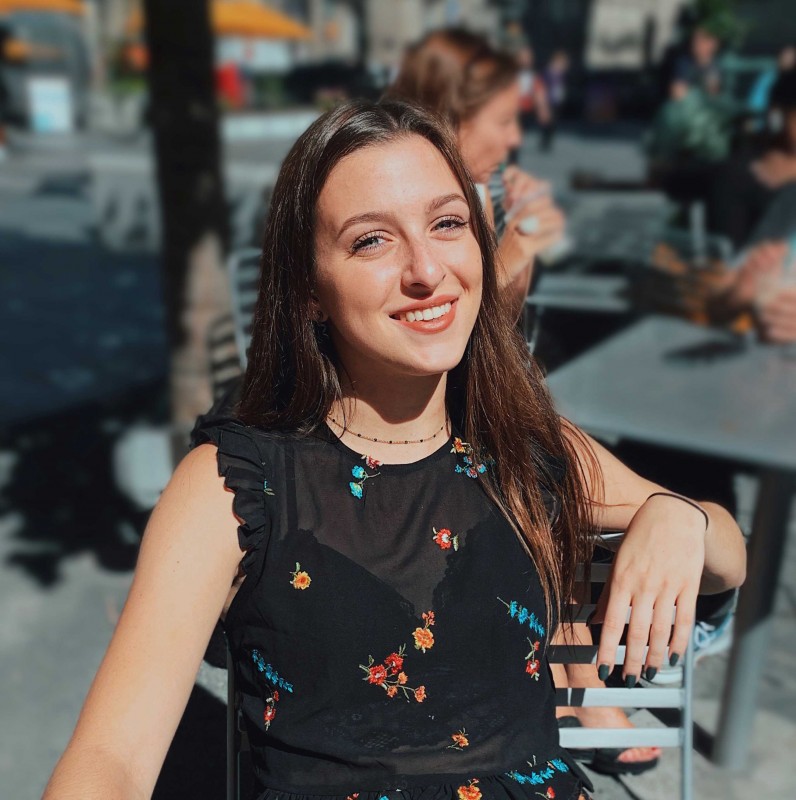 Art and design alumna Mary Horohoe Image Credit: Provided photo.
“I’ve been learning so much,” she said. “My favorite part is the critiques, which pushes you out of your comfort zone. That’s what the real world is all about.”

Kim spent two months researching the complex process behind the creation of ruby-red glass, visiting the museum twice to learn about the science. Until recently, she worked as a graphic designer for a fashion media company, where she illustrated new concepts — drawing on skills she developed during the competition.

In her project on the evolution of eyeglasses, Mary Horohoe ‘19 aimed to show as much content as possible in a minimalistic, unified way, intertwining the educational and aesthetic components, she said. Currently a freelance designer working on projects that range from posters to apparel, she was surprised and excited to learn that she won the bronze

“This competition was a boost of confidence and showed me that the work I’m doing is being recognized and acknowledged as valued graphic design. Viewing the incredible work of the other winners was a great source of inspiration and motivation to always work to enhance my skills and knowledge in the field,” she said. 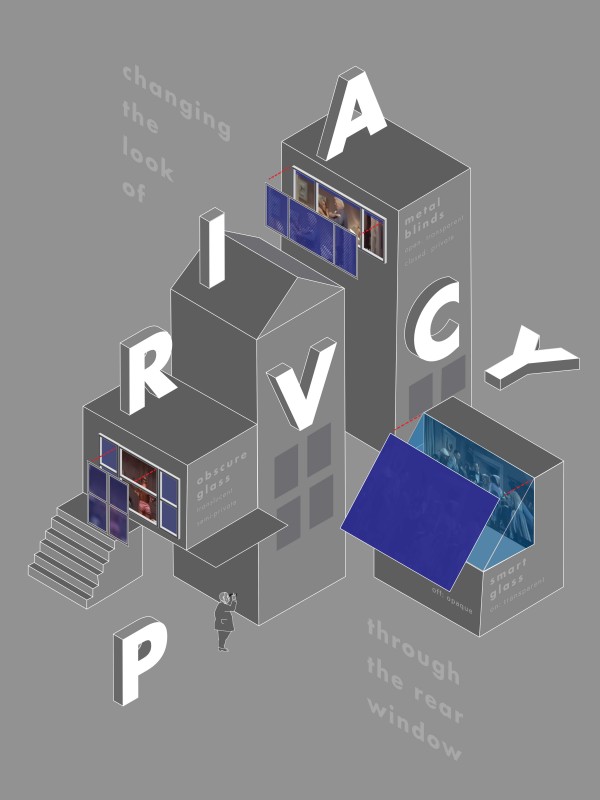 Cindy Knickerbocker's submission to the IIID Award competition looked at the privacy implications of glass.

The strength of liberal arts

Ersan, who began teaching in Harpur College in 2015, had to become a student himself to illustrate concepts from materials science and engineering. To that end, he learned from Piper and graduate students, who in turn learned some of the elements of graphic design. The learning curve was both long and steep; creating the animation that shows how a lithium ion battery works took a dozen different sources, for example.

On the other end of the equation, the scientists learned how to explain concepts more concisely, Piper said. For example: What is the key result and why is it important? Is there a way to explain it better? Improved communication isn’t just useful for elevator pitches and poster slams at academic conferences, but essential to rebuilding the public trust in experts by explaining complex things in clear terms, he said. 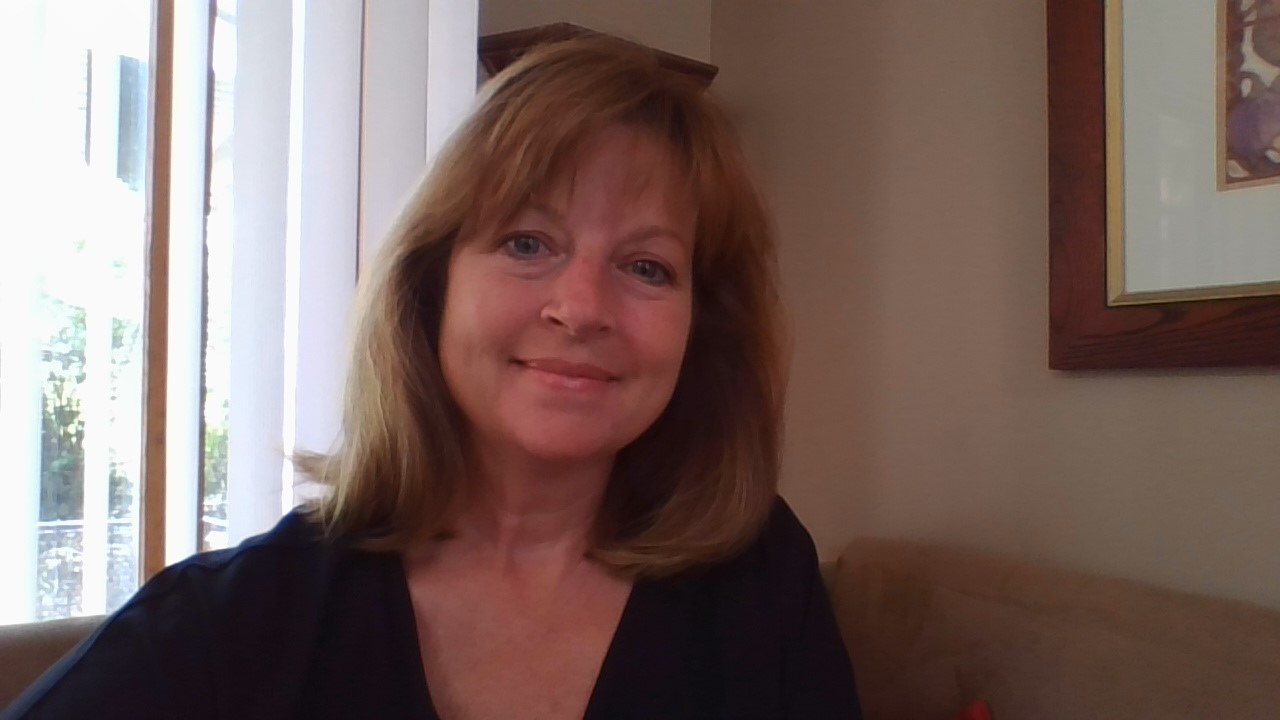 Art and design major Cindy Knickerbocker Image Credit: provided photo.
“There are good technical formulas, but unless you’re embedded in that universe, those sketches aren’t accessible,” Bolt noted. “It’s an opportunity to get that in-between stage, so that a much broader range of people can access the information.”

Overall, the project is a testament to the strength of the liberal arts, which gives students a broad background in both the arts and the sciences, Bolt said. Harpur College’s motto, adopted from a 1954 pamphlet by professors Bernard Huppé and Robert Rafuse, captures the sentiment: “From breadth through depth to perspective,” he said. Ersan and Piper agreed.

“It really shows that a liberal arts background is important and you need that background in science and the visual arts,” Piper said. 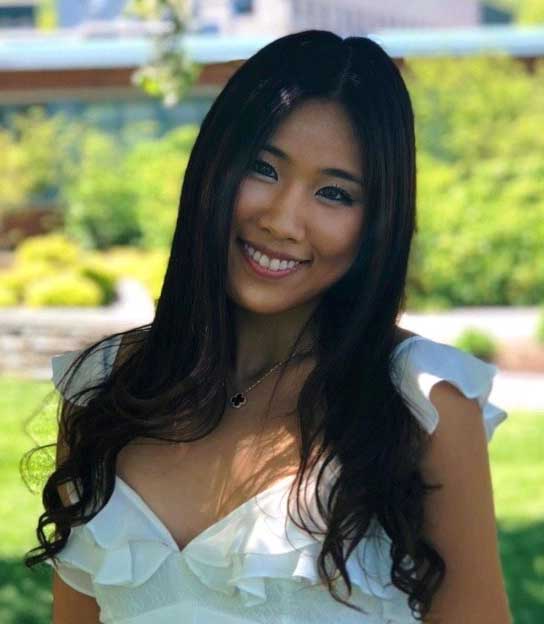