Research and beyond: Lamar Thomas strives to become a woman of value in the lab and the larger world

Lamar Thomas, a second-year PhD student in biological sciences, photographed at a lab in the Biotechnology Building at the Innovative Technologies Complex. Image Credit: Jonathan Cohen. 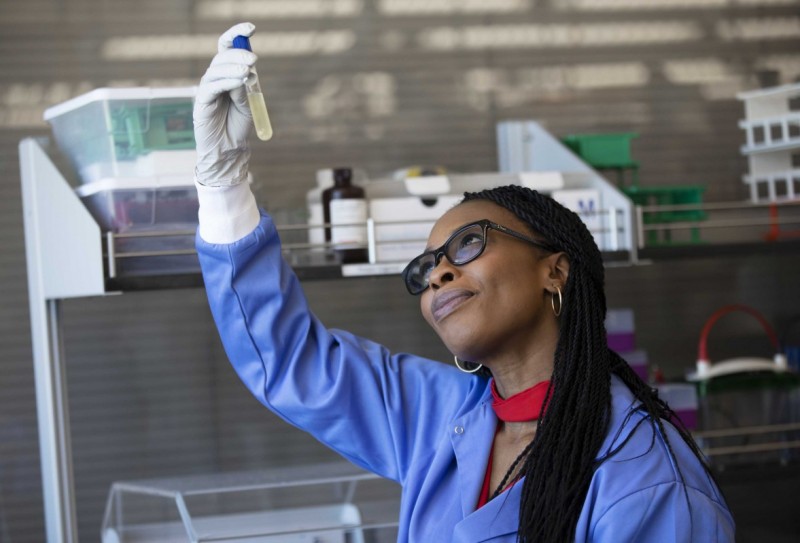 Lamar Thomas, a second-year PhD student in biological sciences, photographed at a lab in the Biotechnology Building at the Innovative Technologies Complex. Photography: Jonathan Cohen.
By Jennifer Micale

A second-year PhD student in biological sciences, her ultimate goal goes beyond research and even vaccine development: She aims to become a black woman of value, which she defines as someone who uses her resources for the improvement and empowerment of others and her community.

“I do not wish to be an average scientist who only does research, though the research may be world-changing. I aim to have a more profound and personal impact on people,” she explained.

Thomas recently received a prestigious fellowship from the National Institute of Allergy and Infectious Diseases, part of the National Institutes of Health, for her research into Streptococcus agalactiae, the leading cause of neonatal sepsis. It’s not her first award; she also received the Clifford D. Clark Diversity Fellowship, which gave her the opportunity to garner enough research data to present at the Cold Springs Harbor Laboratory Microbial Pathogenesis and Host Response conference during her first year in the PhD program.

But the honors aren’t hers alone. She points to the women of value in her own life — the mentors, professors, friends and role models who saw her drive and potential, and invested their time, finances and energy to provide her with opportunities. They include scientist Paula Tennant, her mentor at the University of the West Indies in her native Jamaica and the first woman in the Caribbean to engineer transgenic papaya.

Thomas earned a bachelor of science in experimental biology and a master’s in biotechnology at her alma mater, where she also worked as a research assistant and senior laboratory technologist, and conducted research on diseases afflicting pumpkins, a major agricultural export from Jamaica. She ultimately identified four different viruses and five fungi that affected the pumpkin crop and was the first to report the fungus Fusarium equiseti in Jamaica. The findings from her master’s thesis yielded long-term strategies to protect crops, including the development of an effective fungicide. 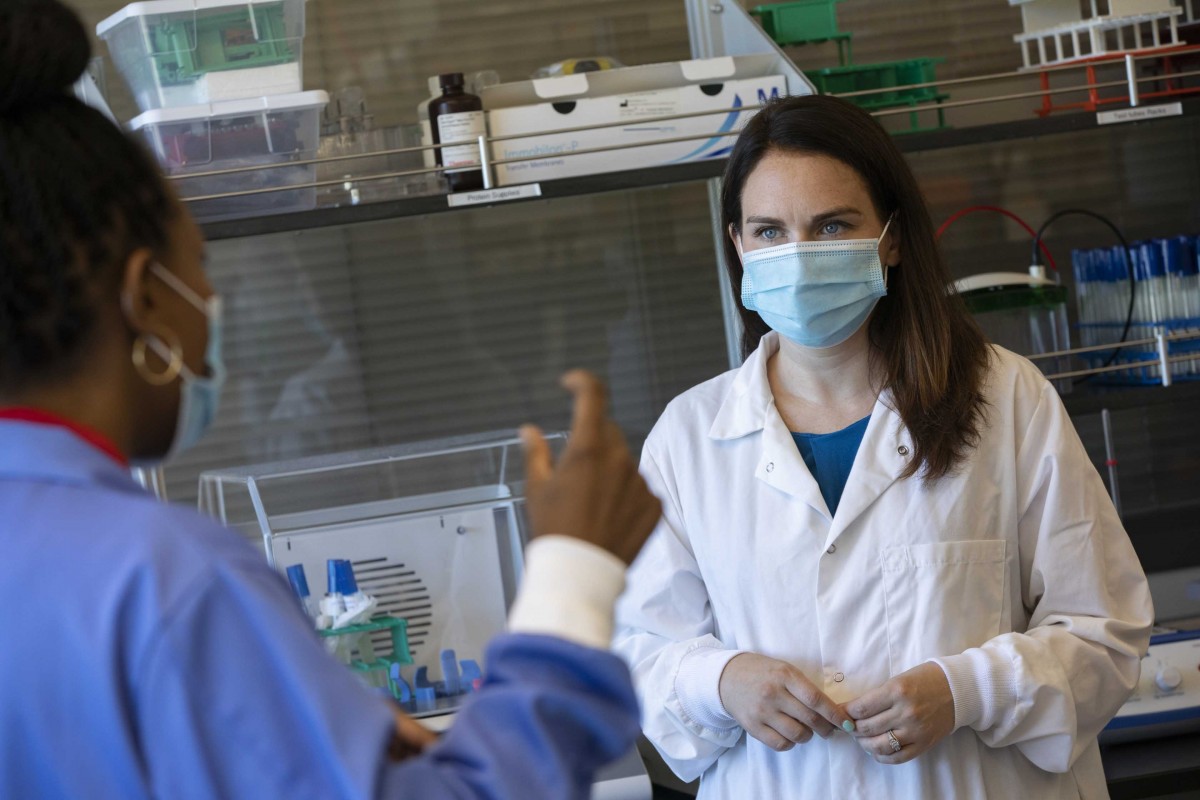 From plants to people

Thomas originally learned about Binghamton from another woman of value: her best friend Jodi-Ann Bennett, and the two planned to attend the University together. During her first visit to campus in March 2018, Thomas noticed both the unaccustomed cold of upstate New York and the warmth of the professors and graduate students who greeted her, passionately discussing their research.

“The Binghamton Biofilm Research Center (BBRC) was my first stop and it set the tone for the rest of my visit. I saw all the technologies that I had only read about while in Jamaica right there at my fingertips,” she remembered.

And unlike other universities she visited during that trip, she felt immediately welcomed.

“It was obvious that BBRC was a community of acceptance, regardless of color or race, and as a black female this was important to me,” she said. “The BBRC is a culturally diverse group and this excites me because not only will I get an exceptional academic and research experience, but I will also be socially exposed to a vast array of different cultures.”

But the dream of sharing that journey with Bennett didn’t come to pass. Thomas started her PhD program in August 2018 — the same month her best friend was diagnosed with leukemia; she died three months later. Thomas attends for them both, striving for excellence to honor her friend’s memory.

About one in every five pregnant women has Streptococcus agalactiae, an important risk factor for neonatal disease. Mothers transmit the bacteria before or during labor, potentially leading to fatal diseases in newborns such as pneumonia, sepsis and meningitis.

Thomas’ research focuses on a single gene and its protein called Sak_1753; Cook first identified the gene as playing a role in GBS infections in mice. For her doctoral research, Thomas will determine the subcellular location of the protein, learning more about its role and importance in GBS infections. This research will help determine if Sak_1753 is potentially a candidate for a future vaccine.

Thomas has been inspired by all of the principal investigators in the BBRC, including Professor David Davies, who guided her through the completion of the Clark fellowship application and Professor Dennis McGee, who taught a favorite course in immunology. She has formed a special relationship with Cook, with both starting at Binghamton around the same time; Thomas is Cook’s first graduate student.

“I feel like we have grown together. Dr. Cook has been my anchor throughout my program,” she said. “She consistently guides and supports me in all that I do, both academically and personally.”

Cook said that she feels lucky to work alongside Thomas, whom she describes as hardworking and resilient as well as funny and charismatic.

“She is willing to put in long hours but also enjoys a dynamic life outside the lab, including working toward increasing diversity in the sciences, at Binghamton University and in the community as a whole,” Cook said. 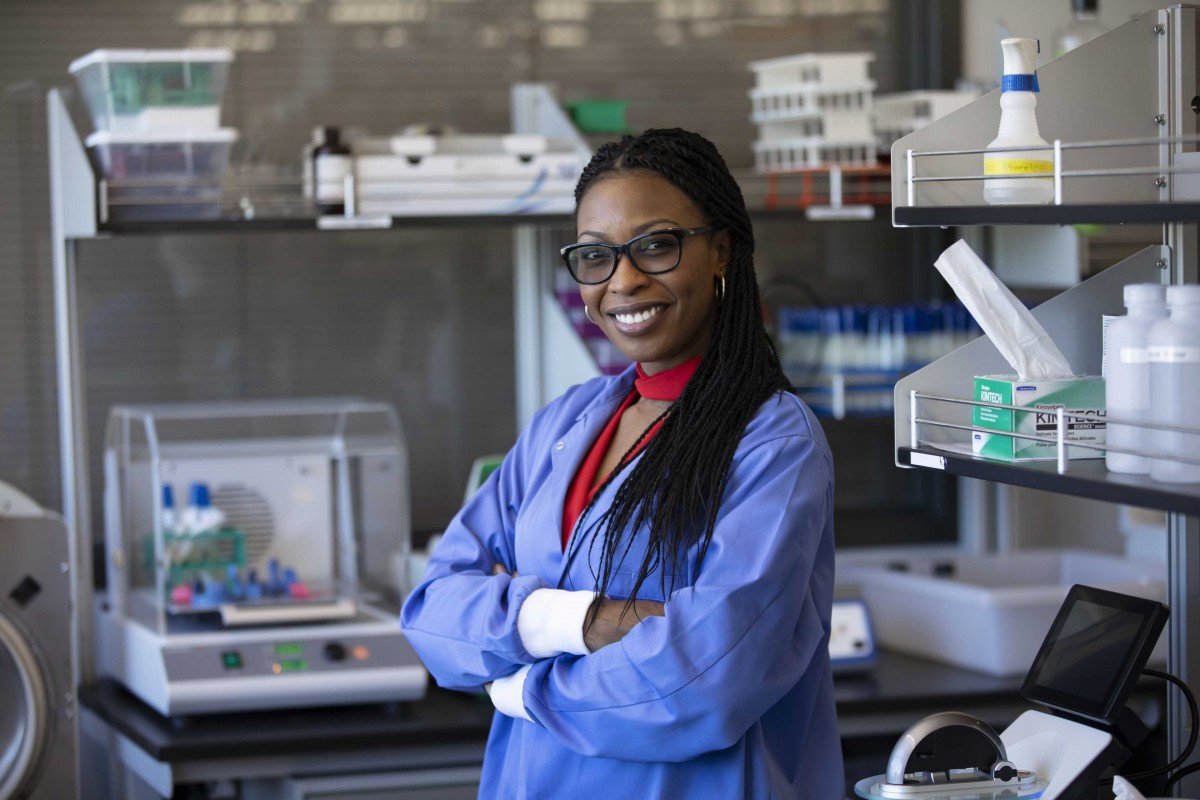 Lamar Thomas, a second-year PhD student in biological sciences, photographed at a lab in the Biotechnology Building at the Innovative Technologies Complex. Image Credit: Jonathan Cohen.
Becoming a black woman of value means giving back to the larger community — a goal of Thomas’ since her undergraduate days.

She spearheaded a community-based educational program in Jamaica, drawing on her own experiences growing up in a poor community. While she recognized the importance of education early in her life, few of her peers shared her interests, considering the sciences too difficult to pursue. Thomas was among only two students who sat for her community’s regional science exams.

She vowed to change this mindset, and show underprivileged youth the opportunities a scientific education could bring. While pursuing her bachelor’s degree, she founded the Caribbean Examination Council Community Program in Kingston, which prepares students for university enrollment. For nine years, she held classes every Saturday at the local primary school, reaching more than 300 students, 60% of whom continued in science.

Thomas continued that dedication to service at Binghamton, where she joined Leaders in Engagement, Advocacy and Democracy, a program created by the Center for Civic Engagement to connect Binghamton students to the community through partnerships with non-profit organizations.

She began a partnership with the North of Main (NoMa) Community Center, with the goal of starting a monthly TEDx-style forum featuring University scientists. The program, Bridging the Gap: Science and Community, is currently on hold due to the coronavirus, but Thomas plans to resume her work once the pandemic relents.

“Community service has been a source of joy and healing for me,” she said.