Assistant professor wins $175,000 grant from NYSERDA and will partner with BAE Systems, C4V 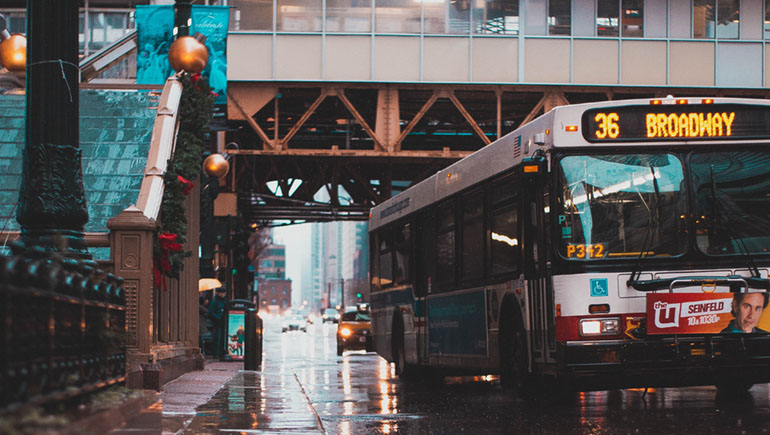 Public transit is essential for residents of large urban areas, but buses add to cities’ air pollution. Even hybrid buses — which run on a combination of electric power and diesel fuel — pump out fumes that can be harmful.

Fully electric buses would solve the issues of air quality, but current battery life for vehicles of that size is limited. Adding more batteries would mean more potential mileage, but it would reduce the room available for passengers. Returning to a depot every time a recharge is needed would require more buses to keep steady the number of vehicles on the streets.

Binghamton University Assistant Professor Pritam Das thinks he has a plan that would address all these concerns, and he has received a $175,000 grant from the New York State Energy Research and Development Authority (NYSERDA) to test his theories.

Offering a matching $175,000 worth of resources are BAE Systems, a leading manufacturer of hybrid buses; and C4V, a startup company based in Binghamton and mentored by Distinguished Professor M. Stanley Whittingham, who won the 2019 Nobel Prize in Chemistry for his role in the creation of the lithium-ion battery. Also assisting in the research are BC Transit, the regional public transportation provider in the Binghamton region; and Consolidated Edison Inc., the electric power provider for New York City.

Das — a faculty member in the Department of Electrical and Computer Engineering at the Thomas J. Watson School of Engineering and Applied Science — won the NYSERDA award through its Public Transit Technology and Innovation Program with a proposal to develop extra-fast-charging (XFC) systems utilizing extended-lifetime batteries.

The XFC technology would be developed at Binghamton and tested at BAE before being installed for some New York City bus routes. The all-electric system would remove 500,000 metric tons of carbon dioxide each year from the NYC metro area.

As one of the world’s most congested urban environments, New York City is an ideal choice for the feasibility of XFC experimentation, Das said.

“Each time you slow down on a route — not just to pick up people but because you’re in a congested city that isn’t planned for transit buses — you start draining the battery very badly. You get into trouble with battery sizing versus range,” he said.

“Also, New York City is not only huge, but there are large variations in weather. There are very cold, wintry days when the batteries cannot have the full range as you have on a hot summer day.”

In Europe’s less congested regions, municipalities have set up battery-based fast-charging stations to give buses a top-off during passenger stops. Among the potential problems with those systems are infrastructure support from the electric grid, maintenance of the equipment and potential theft of the charging station batteries.

Das’ XFC system would have major bus stops equipped with robot arms that would reach down from electrical wires above and connect to buses’ batteries to recharge them in five to 10 minutes.

“It reminds us of the good old trams and streetcars, like where I grew up in Calcutta — the only city in India that has streetcars,” he said.

In addition to lowering pollution levels, the XFC technology would increase energy efficiency and require lower upfront costs for mass-transit use by reducing the downtime now needed to charge buses.

Another advantage: Current hybrid buses could be modified to use XFC stations, allowing the buses to be replaced gradually rather than all at once.

“The benefits to any city that uses this XFC technology are obvious,” Das said. “We are grateful to NYSERDA, BAE and C4V for their support and funding, and we are excited to get started on this project.”