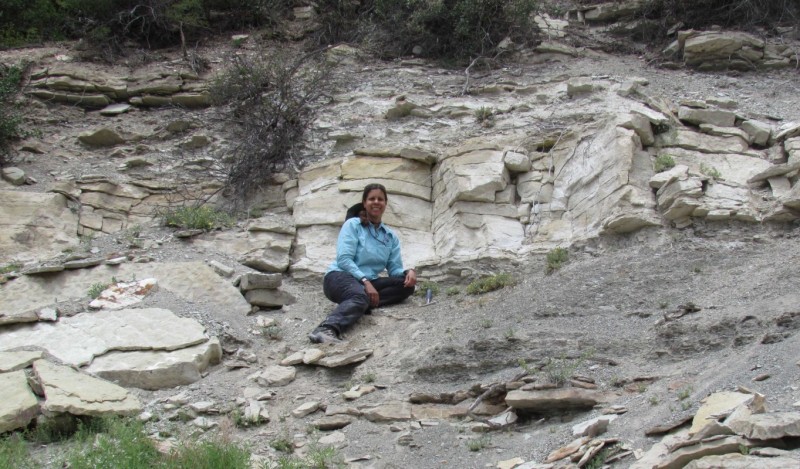 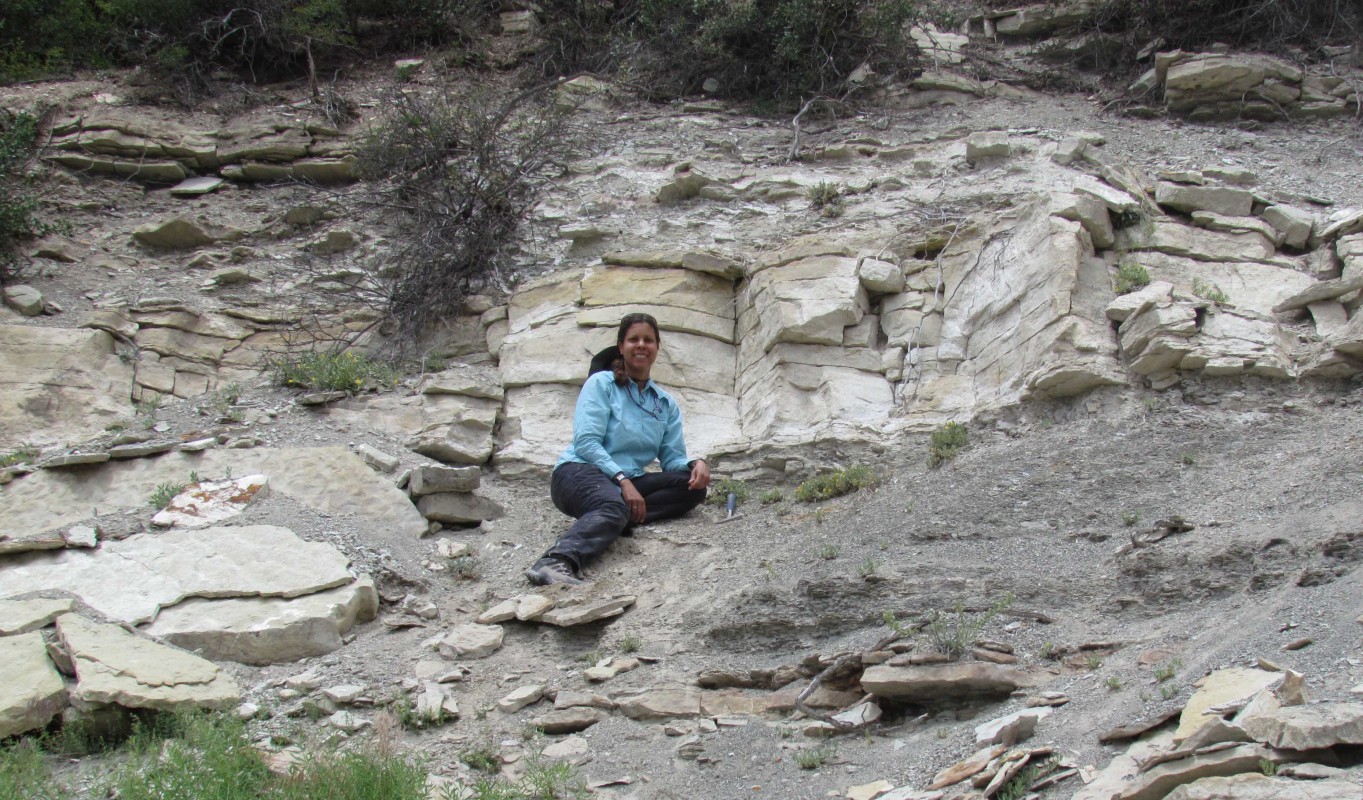 Kuwanna Dyer-Pietras, a Presidential Diversity Postdoctoral Fellow in the Department of Geological Sciences, in the field. Image Credit: Provided photo.
By Jennifer Micale

As a geologist, Kuwanna Dyer-Pietras reads the layers of stone and sediment, interpreting the hidden history of the Earth.

Now a Presidential Diversity Postdoctoral Fellow in the Department of Geological Sciences, she also builds on the bedrock of a history laid down through long years. The first Black woman to earn a PhD in geological sciences at Binghamton University, Dyer-Pietras is one of only 50 Black women in the United States to hold a doctorate in the field. She is a first-generation student and the first in her family to pursue higher education.

Her father served in the Army for 29 years. Her grandfather, an employee at the Alcoa aluminum plant in Tennessee, headed the local NAACP and was instrumental in the desegregation of schools there. Despite his accomplishments, her grandfather had not completed high school, leaving after his junior year to help support his family; her grandmother left school following the seventh grade for similar reasons.

Trace her family back further and you find farmers, disenfranchised during Reconstruction and navigating a world that proclaimed itself “separate but equal,” but with few opportunities for people of color and ongoing threats of racial violence. Follow the thread just a little further back, and those ancestors were enslaved.

While education has been Dyer-Pietras’ own pathway to a better life, it has become so much more than that. Earning her doctorate in May 2019, 400 years after the first slave ships arrived from Africa, was an important accomplishment for both her family and her family line, she explained.

“And being named a Presidential Diversity Postdoctoral Fellow, with the research, teaching and mentoring I can conduct as a fellow, is a continuation of this legacy,” she said. “I am my ancestors’ wildest dreams. They made this possible for me and so this is for them.”

The geological sciences are among the least diverse of the STEM fields in the United States, with whites earning almost 90% of doctorates, writes Kuheli Dutt, chief diversity officer for Lamont-Doherty Earth Observatory of Columbia University, in a 2019 article in Nature Geoscience. Faculty of color also hold less than 4% of tenured or tenure-track positions in the nation’s top 100 geoscience departments.

The representation gap is a multi-faceted problem and requires more than increased advertising, Dyer-Pietras said.

To recruit students of diverse backgrounds, academic programs need to provide a welcoming space conducive to students’ academic and personal success. A key part of these efforts is recruiting faculty members who reflect the diversity of the student body — particularly in fields such as the geosciences, which have been overwhelmingly white.

“Many undergraduate and graduate students, having experienced systemic racism in their personal and academic lives, will look to geoscience programs with people who look like them,” she explained. “Students seek out faculty who look like them because they know that these faculty have shared experiences and will be able to relate to them.

“Beyond increasing representation, geoscience departments need to consider how well we market our programs to students, shifting the focus from the traditional, field-based scientists to include the many other areas of research we work in as geologists, such as computer modeling, remote sensing and geochemical isotope analyses,” she continued. “Increasing the number of scholarships available to Black students in the geosciences is also incredibly necessary.”

Universities and academic programs also need to celebrate the successes of Black students, graduates and colleagues, such as earning a PhD, landing a tenure-track position or securing tenure.

“We need to stop making our Black students and colleagues feel invisible by ignoring their successes, while insisting that we are an inclusive environment,” she said.

It’s a dynamic she plans to change, starting with celebrating the successes of her own students.

She originally majored in environmental science at UNLV but discovered she was more interested in understanding the processes involved in Earth systems. Later, she enrolled in a physical geography class to meet a University core requirement.

“I still remember the day I walked out of that first lecture. For the first time since enrolling in college, I felt that I had learned something immediately relevant,” she remembered. “It was an incredible feeling, suddenly understanding the origin of the mountains, volcanoes and desert climate around me.”

A fan of detective shows in her college days, she likens her professional work to reconstructing events from clues at a crime scene. As a sedimentologist, she is also a geological detective, deeply probing rocks for clues — sedimentary bedforms, paleosols, fossils and geochemical isotopes — that will give her the information she needs to understand the ancient environment that once existed there.

In her research, she investigates how lakes and rivers millions of years ago formed in basins in Colorado and Wyoming; she has also modeled glacier growth during the Last Glacial Maximum in Nevada’s Spring Mountains. In addition to conducting fieldwork, she uses geographic information systems (GIS), spectral analysis, X-ray diffraction analysis, scanning electron microscopy and geochemical isotope analysis in her work.

As a postdoctoral fellow, she will begin building a research program and plans to begin recruiting students of her own for projects.

“I enjoy mentoring students in research, as well as in a classroom setting,” she said.

She currently teaches a course in Earth surface processes and is putting together a spring seminar that will investigate Black geoscientists’ contributions to the field, including discussions of their research focus areas and the time periods during which they lived.

Dyer-Pietras serves on the planning committee for the upcoming social media event #BlackInGeoscience week, which runs from Sept. 6 to 12. She is also contributing to the upcoming Wild Women film project, which highlights underrepresented women while addressing race and inclusion in outdoor spaces.

Dyer-Pietras has already done a lot for the department and the field, and Associate Professor of Geological Sciences and Environmental Studies Peter L.K. Knuepfer looks forward to seeing her future unfold.

“Kuwanna has already developed into a very capable scientist, but this fellowship will help her establish new areas of research and launch her independent research career,” he said. “To my mind, this is exactly the kind of person that this program should be supporting, and I really hope we’ll be able to offer Kuwanna a tenure-track faculty position at the end of the fellowship.”