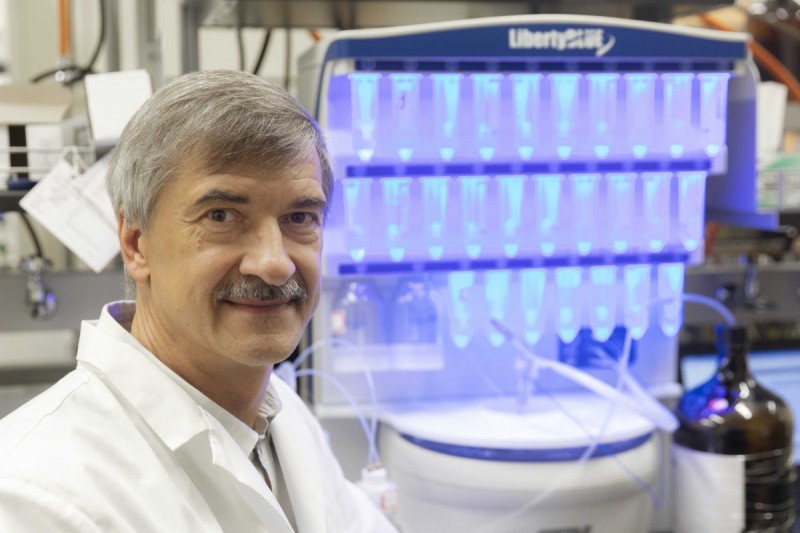 Ribonucleic acid, or RNA, is an essential ingredient to all known forms of life, along with DNA and proteins. In fact, as the Human Genome Project discovered, only 2% of our DNA encodes for proteins, while 70 to 90% is transcribed for RNA.

So, what is all that RNA doing in our cells? That’s what Professor and Chair of Chemistry Eriks Rozners is working to find out.

“There is a large amount of RNA being made in our cells at any given time. The biological function of most of these RNA molecules is poorly understood,” he said.

Rozners recently won the 2021 Melville L. Wolfrom Award from the American Chemical Society’s Division of Carbohydrate Chemistry. The award, which will be presented during the society’s national meeting next March in San Antonio, recognizes individuals who have provided outstanding service both to the division and the field of carbohydrate chemistry.

Rozners has served in multiple roles with the ACS’ Carbohydrate Division in the past eight years, including terms as executive secretary, program chair and division chair.

“This is a very important recognition for me. I am honored and humbled to join a long list of eminent chemists who have exemplary track records of leadership and service not only to the American Chemical Society, but the scientific community at large, while also being cutting-edge innovators and drivers of the field of carbohydrate chemistry,” he said.

Prior winners include Peter H. Seeberger, director of the Max Plank Institute of Colloids and Interfaces, and Scripps Institute Professor James C. Paulson, chair of the Department of Molecular Medicine, who also served as acting president and CEO of Scripps from 2014 to 2015.

Carbohydrates are more than just a component of the diet. These biomolecules, which include sugars and starches, also play an important role in our cells.

While proteins are made of amino acids connected through peptide bonds, DNA and RNA are made of nucleosides connected through phosphate linkages, Rozners explained. Nucleosides in turn are made from both ribose sugars and heterocyclic nucleobases — the A, T, C and G you may be familiar with from classroom lectures about DNA. The presence of those ribose sugars is what connects nucleic acids with carbohydrate chemistry.

“One of the main projects in my lab is development of new RNA analogues that connect nucleosides with peptide bonds. In a sense, we are making RNA-protein chimeras,” Rozners said.

To achieve this goal, he and his lab use synthetic carbohydrate chemistry to modify the ribose sugars in RNA to attach to the peptide bonds. In another project, they are exploring the molecular recognition of RNA as a carbohydrate-based biopolymer, he said.

His lab’s research both furthers knowledge about the potential new roles that RNA may play in biology, and can potentially lead to practical applications. Rozners pointed to the recently discovered CRISPR-Cas system, which plays a role in the anti-viral immune systems of single-celled organisms such as bacteria and has led to the development of gene-editing technology.

“These discoveries may shed light on the origins and chemical basis of life and may also provide clues about potential new therapeutic approaches,” he said.