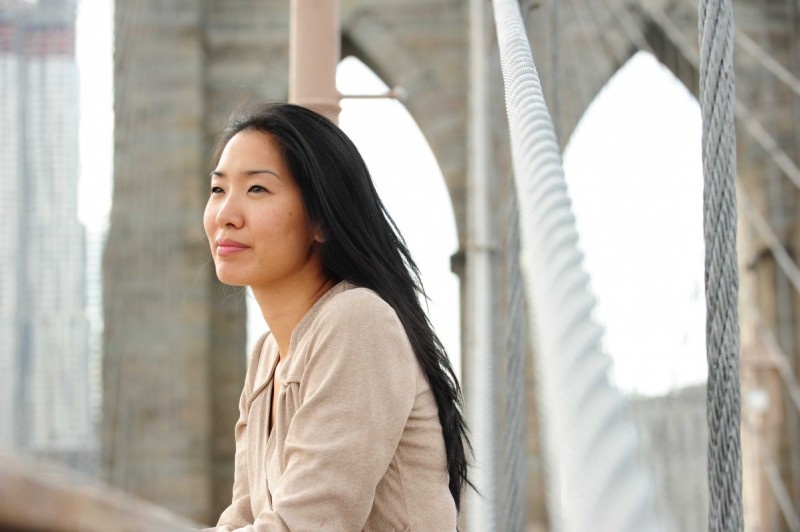 When you put pen to paper, you don’t always know what will emerge. The shape of a poem emerges gradually from words and images to capture the inexpressible.

That’s one of the reasons 1991 Harpur College alumna Tina Chang is drawn to the genre. Brooklyn’s poet laureate for more than a decade, Chang returned to Binghamton this fall as an associate professor of English and director of its Creative Writing program.

A creative writing workshop in her own college days sparked Chang’s interest in poetry. In that first class, she felt deeply intimidated by her classmates’ talent; some had already published works in literary magazines, or staged plays at their respective high schools. They explored multiple genres of writing, but poetry spoke most deeply to her.

“I loved poetry’s efficiency and impact. Its lyricism and its scope. It felt very distinctly like the language I could speak, the language I had been searching for to express the inexpressible,” she explained.

She has many favorite poets, including Jack Gilbert, whom she admires for his exactitude of language and his expression of love and desire without sentimentality. Another major influence, poet, translator, memoirist and human rights advocate Carolyn Forche, will speak during Binghamton’s Distinguished Writers series on Nov. 12.

“We are absolutely thrilled to have a writer of Tina Chang’s stature and significance joining the English department at Binghamton and leading the Creative Writing program,” said Associate Professor and English Department Chair Joseph Keith. He described Chang as “someone whose poetry and career has been publicly engaged on so many levels and so dedicated to wrestling with some of the most urgent and complex issues of identity, race and social justice.”

At Binghamton, Chang majored in English literature, with a focus on creative writing. Many memories capture those days, from late nights of studying at Broome Hall to all-day writing sessions with classmates. When she moved from off-campus housing onto campus, she felt the pangs of loneliness, which melted away when she connected with new friends during her second year.

Dances. The Newing Navy. Weaving the threads of connection with both classmates and faculty, and so creating the cloth of her future.

“To this day, my closest friends are the friends I met at Binghamton. We have supported one another for close to 30 years,” she said.

She also formed a close relationship with Distinguished Professor of English Arthur Clements, the first faculty member to see her as a future teacher and poet. After Chang graduated, the two kept in touch for years, with Clements offering his encouragement, lists of books to read and clippings of publishers or contests he thought she would appreciate.

“I was so taken aback by his clarity in seeing my path, it took me a long time to realize what he saw in me,” Chang remembered.

After graduation, she spent years in the book and magazine publishing industry before enrolling in Columbia University for her Master of Fine Arts degree in poetry. She went on to publish three poetry collections — Half-Lit Houses in 2004, Of Gods and Strangers in 2011 and Hybrida in 2019 — and co-edited Language for a New Century: Contemporary Poetry from the Middle East, Asia and Beyond in 2008.

After publishing her first poetry collection, she couldn’t wait to send Clements a copy. Before she slipped it in the mail, she scanned a Binghamton alumni newsletter and found his obituary. His death struck her hard; her mentor never knew that she had achieved the goal he saw for her.

“Upon deeper reflection, I felt he guided me and so many students like me. He had placed his faith in all of us and his kind-hearted, thoughtful, peaceful work was his legacy,” she said. “In so much of what I do and intend to do at Binghamton, I carry his lessons with me.”

Poetry and the public

We may consider poetry a private art, an expression of deeply held truths, but Chang also focuses on its public role. As Brooklyn’s poet laureate, she promotes the art form through readings, talks, conversation, and educational and literary programming, she explained.

Before the pandemic, she was often on the road in the borough and beyond, visiting non-profits, community and senior centers, literary and book clubs, universities and schools, and other institutions. Efforts included installing poetry in public gardens, launching poetry festivals and creating poems for special locations throughout Brooklyn. Early literacy has been a major focus, and over the last eight years Chang has brought children’s book authors into public schools to speak with young readers about stories, the writing process and the writer’s life.

Furthering her community outreach efforts, Chang is also one of 23 individuals to receive a 2020 Poets Laureate Fellowship from the Academy of American Poets, which comes with a $50,000 grant for a civic project.

Chang is collaborating with the Brooklyn Public Library (BPL) to establish the library’s first-ever Poet-in-Residence, who will receive an honorarium, opportunities for civic engagement, access to archives and librarian support and a physical workspace. The Poet-in-Residence also will work with Chang to develop a book-length volume of poetry, and have the chance to work on the library’s National Poetry Month event. BPL serves more than 2.6 million residents in 59 branches, and its educational, literary and cultural programs play a crucial role in the community, where almost a quarter of the residents live in poverty.

On the teaching front, Chang previously taught poetry at Sarah Lawrence College. Her dream, however, was to lead a creative writing program — an opportunity that she found at her alma mater.

“When I learned that Binghamton University was searching for a new creative writing director, it seemed like the perfect match. To be able to return to my alma mater to teach and to mentor in the ways I was mentored is meaningful to me,” she said.

In fact, the previous creative writing director, Maria Mazziotti Gillan, was the first person to publish Chang’s work in a national anthology of poetry during her student days. The two didn’t know each other personally, but that published poem lit a spark, giving Chang the confidence she needed to pursue her passion.

“Remembering Maria as a catalyst for my early work was a sign to follow in her footsteps. I envisioned building a bridge between the program she so lovingly built and the one I could possibly continue and lead,” she said.